Scouse Bird Blogs meets Craig David ahead of M&S Bank Arena Liverpool gig this April - The Guide Liverpool
Contact Us Advertise with The Guide Our Video Services Follow us:

Ahead of his eagerly anticipated return to Liverpool on the 24th of April (his show has been postponed for two years due to the pandemic), Craig David sits down with us and talks all things Hold That Thought…

Steph: Let’s get straight to it, you’re coming to Liverpool on the 24th of April, what can we expect from the show?

Craig: I’ve had the last two years to really consider what it is that the fans want to hear and to really perfect and hone the setlist. There’ll be hits from the early days as well as DJ sets and a live band plus some new music like the song I released with MNEK last year and some stuff from the upcoming album

Steph: Obviously the show was delayed because of the pandemic, what have you been getting up to in the last couple of years?

Craig: Well for the first time in a long time all of a sudden everything just stopped. Suddenly there were no deadlines to work towards, no rush and I could just spend time with my family doing the things I love but then it also allowed me the time to step back and just really work on my music in the same way I did when I released Born To Do it. There was no pressure. The pandemic was really hard in a lot of way,  but at the same time I think it made people consider their work life balance and think “What the hell are we doing going at 100mph all the time and not really getting any further than if we just stepped back and chilled”

Steph: Do you think the space and freedom gave you more time to be creative?

Craig: Yeh, like I say, when there’s no pressure it gives you time to really focus on what you love.

Steph: You released your new song “Who you are” with MNEK last year, what can we expect from the upcoming album 22?

Craig: You know it’s something I’m really proud of. With all the time I had over the last couple of years I managed to get over 100 songs written and then these have been whittled down and whittled down into an album that’s completely no filler and I think fans new and old will really love it.

Steph: Well, I can’t wait to hear it, I absolutely loved Born To Do It. So, we’re going to do something a bit different now, I put a box up on Instagram and asked people “If you could ask Craig David anything, what would you ask him?” so I’m going to ask you a couple of things if that’s ok?

Steph: You’re notorious for saying “Craig David” on your songs… do you feel like DJ Khaled and Jason Derulo are ripping you off?

Craig: You know, it was a really in thing to do at the time and it’s big among DJ’s and Producers like for example DJ Khaled. You can hear some new music, like for instance when Rewind etc came out and no one had ever heard of me, no one would recognise my voice, but they learn my name and then they know exactly who I am until it gets to a point where you no longer need to do it. I don’t actually do it anymore!

Steph: Ha! Ok so what happened to the girl after you chilled with her on Sunday?

Craig: *Laughs* We carried on chilling, and we had a great time and a really nice relationship together.

Steph: Ok! So, someone else asked ‘Can I get a rewind? Like about 3 years’ so on that note is there anything you wish you could rewind, like any regrets?

Craig: No, I definitely think the mistakes and bad times teach us things and take us to where we need to be and without them, we wouldn’t be where we are, so I don’t think I have any regrets! 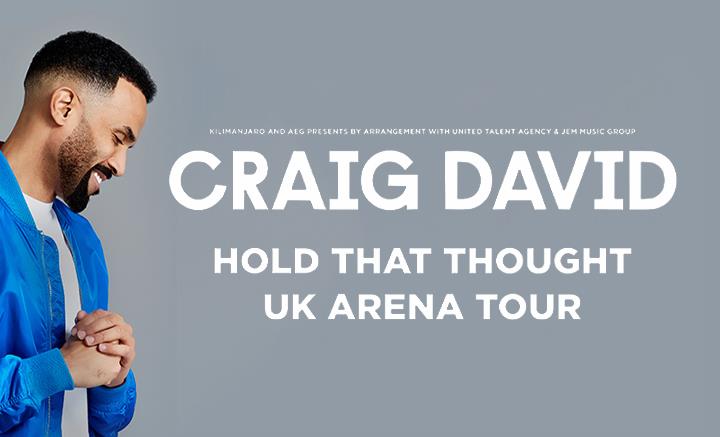 Steph: Exactly, like once upon a time I was watching you on Top of The Pops and now I’m here chatting with you, and everything good and bad in life has led up to this, it’s so strange!

Craig: Yeh that’s exactly how I felt when I was on TOTP like wow this is mad! As well, on TV it looks massive but in the studio it’s actually tiny!

Steph: Right Craig thanks so much for speaking with me today and I’m looking forward to seeing you when you come visit in April! Have a boss day!

Craig: Yeh deffo I’ll see you when I’m up and we can vibe together!

For tickets to come see Craig David on his Hold That Thought tour at Liverpool’s M&S Bank Arena on 24 April visit the website here.