Sir Peter Blake's 'Dazzle' Ferry has been extended by popular demand - The Guide Liverpool
Contact Us Advertise with The Guide Our Video Services Follow us: 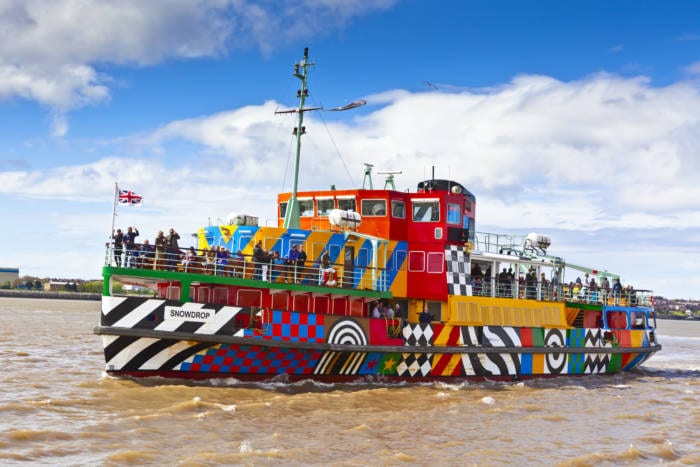 The Mersey wouldn’t be the Mersey without our ferries and that includes our colourful ‘dazzle’ ferry which will now be sailing for longer.

Sir Peter Blake’s Everybody Razzle Dazzle Mersey Ferry, which was specially commissioned by Liverpool Biennial, 14-18 NOW and Tate Liverpool as part of the First World War Centenary art programme, has been extended by popular demand.

The Dazzle Ferry has proved extremely popular with locals and visitors alike, with many groups insisting on booking it during their trip to Liverpool, whilst also attracting media interest nationally and across the world.

The Ferry will have the dazzle livery design renewed when it goes in for its regular out-of-water survey in February. It was due to be returned to its original paintwork but it will now continue with the livery designed by the British Pop artist until it is taken out of service to make way for a new Mersey Ferry in the future.

Everybody Razzle Dazzle was inspired by the dazzle designs which were painted on merchant navy vessels to confuse the enemy during the First World War. In 2018 it also helped celebrate Liverpool’s 10-year anniversary of European Capital of Culture.

Sally Tallant, Director of Liverpool Biennial, said: “Everybody Razzle Dazzle is one of the city’s iconic public artworks. We are thrilled that, with the artist’s support, Snowdrop will remain dazzled until the end of its service. It has become a recognisable and much-loved feature of Liverpool’s Waterfront, alongside other sculptures by internationally-renowned artists, such as the recently-launched Liverpool Mountain by Ugo Rondinone on the Royal Albert Dock.”

Jenny Waldman, Director of 14-18 NOW, said: “We are delighted that the life of this wonderful artwork is to be extended into the future. Everybody Razzle Dazzle gives audiences the chance to reflect on a crucial moment when art contributed to saving lives in the First World War. The artwork has become a wonderful landmark in Liverpool which reflects its rich maritime history.”

Cllr Liam Robinson, Transport Portfolio Holder for the Liverpool City Region Combined Authority, said: “It’s fantastic news that we will continue to see the Dazzle Ferry design brightening up the river for the foreseeable future. It’s been a popular feature on the waterfront over the last four years and I’m sure it will continue to be up until the new Mersey Ferry comes into service.”

For more on our Mersey Ferries head to the website here.