Smoking gets the red card at kids’ football matches in Liverpool - The Guide Liverpool
Contact Us Advertise with The Guide Our Video Services Follow us:

Smoking gets the red card at kids’ football matches in Liverpool 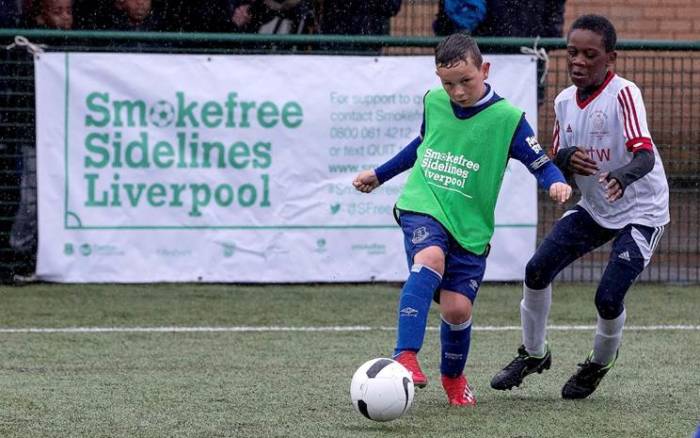 Smoking by adults at children’s football matches in Liverpool will be officially stubbed out from this weekend as the new season kicks off.

After a successful six-week pilot throughout the summer, Smokefree Sidelines Liverpool guidance will now apply and any adults smoking or vaping at matches or training sessions will be asked to stop by match officials.

Over 465 football teams play in the age groups up to under-11s in Liverpool with about 40,000 adults coming to cheer them on throughout the season.

Research shows that there is no known safe level of exposure to secondhand smoke, even if the exposure is outdoors. Also, if children are around adults who smoke they think it is more common than it actually is making them three times more likely to take up the habit as they get older.

MORE: The Spooky Welly walk is returning to Sefton Park

David Pugh, chief executive of Liverpool County Football Association, said: “The launch of Smokefree Sidelines Liverpool at the Summer League in June was excellent and all of the city’s youth leagues are fully supporting this policy as we start the new season.

“As the governing body of football in Merseyside it is very important to us that children and young people can play the sport they love in a healthy environment.

“Football is an important part of family life across the area and the youth teams are the foundation of the Liverpool County FA’s footballing family. Smokefree Sidelines will safeguard both children’s health and the health of the game.”