Spice Girls are back: We look back at their style evolution - The Guide Liverpool
Contact Us Advertise with The Guide Our Video Services Follow us:

Spice Girls are back: We look back at their style evolution 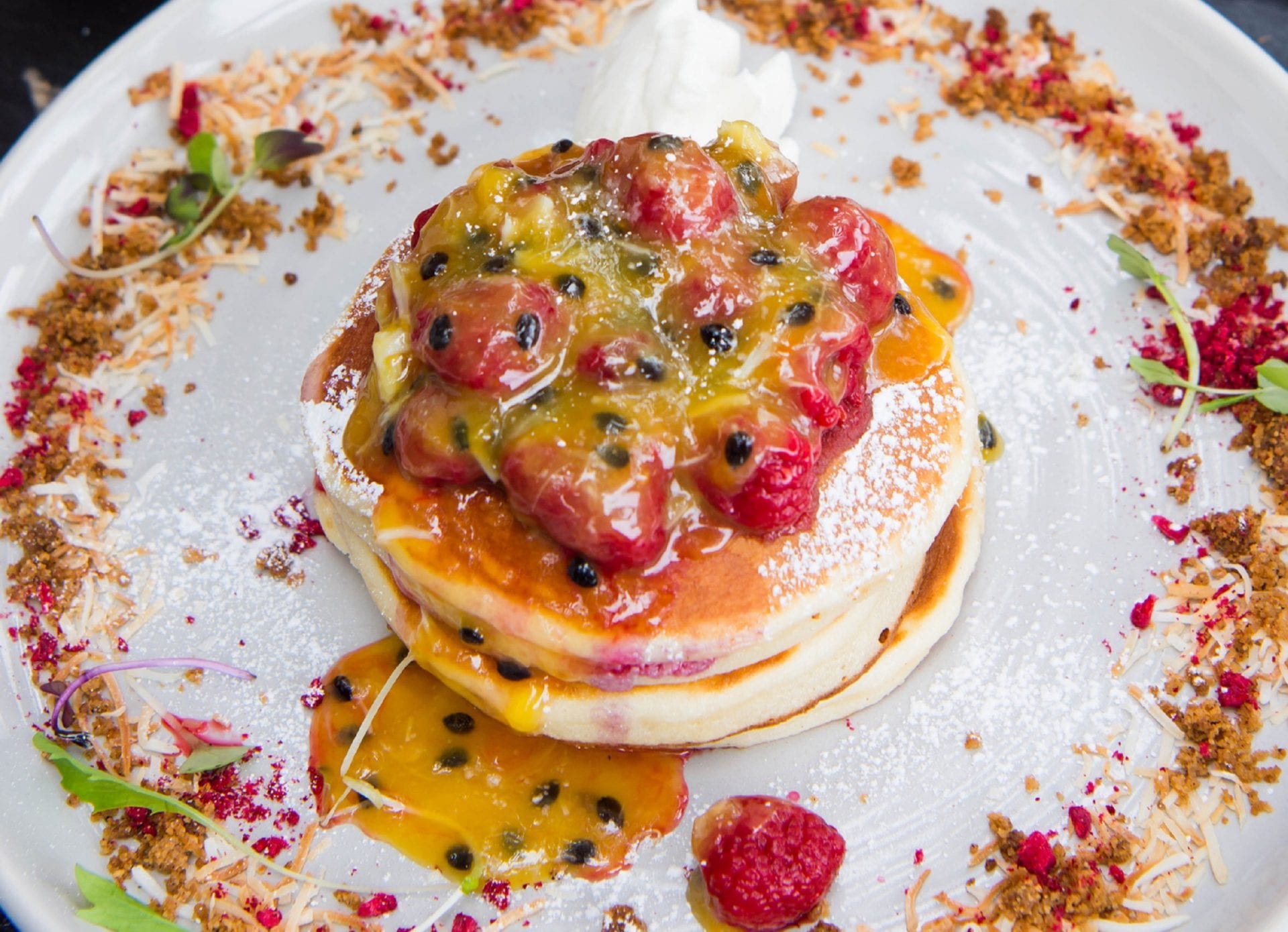 Home › Culture › Celebrity › Spice Girls are back: We look back at their style evolution

After months of speculation following a photo Victoria Beckham posted on Instagram, we now know exactly what the long-awaited Spice Girls reunion will look like, and it won’t involve Posh at all.

The remaining four members of the group will be going on tour for the first time in a decade, with a string of UK stadium concerts next summer.

Announced via a post on the office Spice Girls Instagram page, the tongue in cheek video shows Mel B, Mel C and Emma Bunton clad in black, with Geri Halliwell showing up for a spoof TV announcement wearing a sparkly blue dress, much to the annoyance of the others.

There’s also a glamorous new promo shot of the foursome, but before we look at how the 40-something singers are dressing these days, let’s look back at how their style has evolved from 1996 to now… 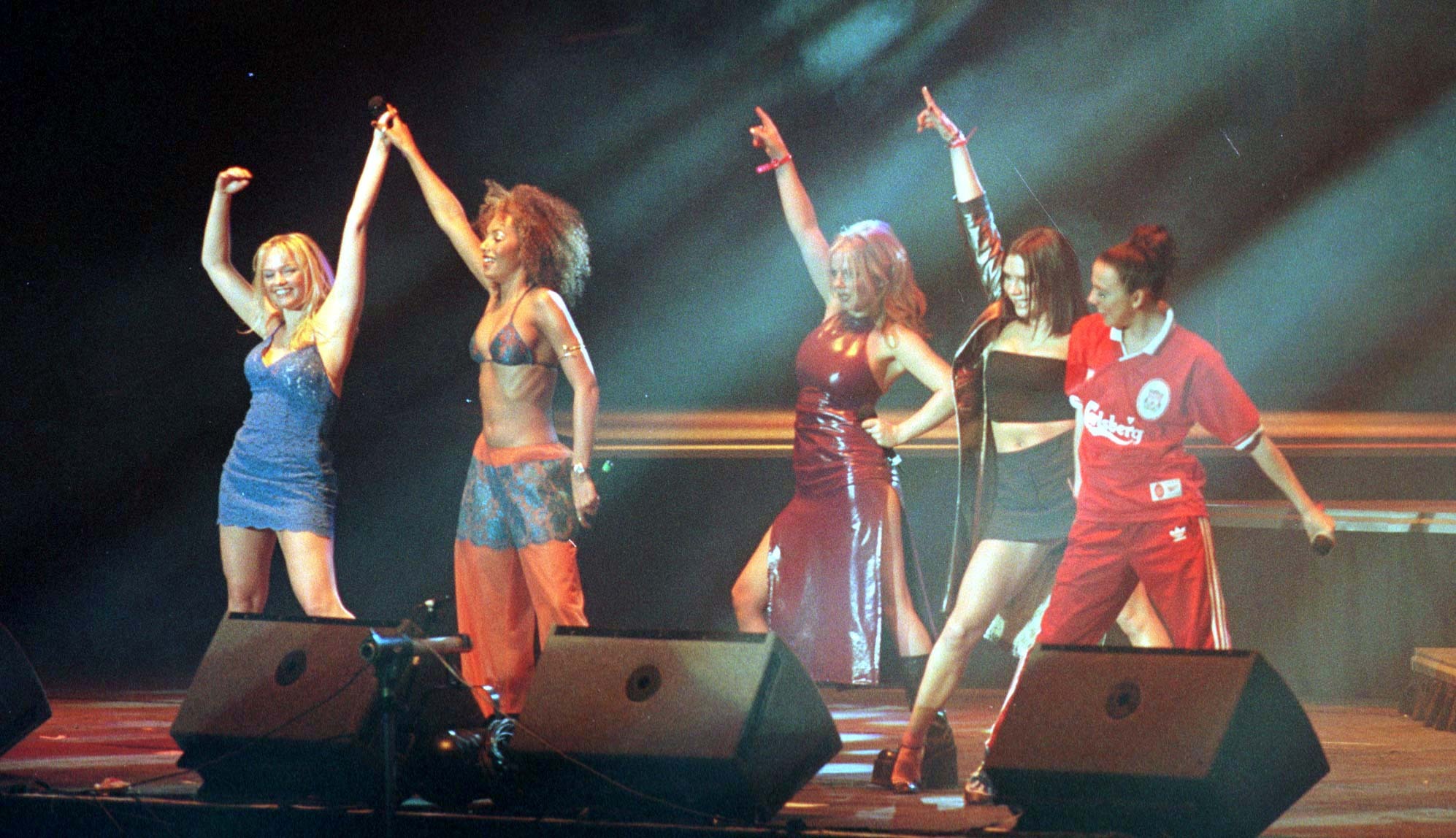 Spice Girls on stage at the 96.4FM BRMB Music Jam at the NEC in Birmingham Photo Barry Batchelor/PA.

From the very beginning, each of the Spice Girls had their own distinctive look.

Mel ‘Scary Spice’ B was all about leopard print, catsuits and bra tops, while Emma ‘Baby Spice’ Bunton favoured cutesy mini dresses and lots of pink.

Geri ‘Ginger Spice’ Halliwell had the most exuberant and eclectic style, rocking skin-tight, super-short dresses and lots of bright colours. 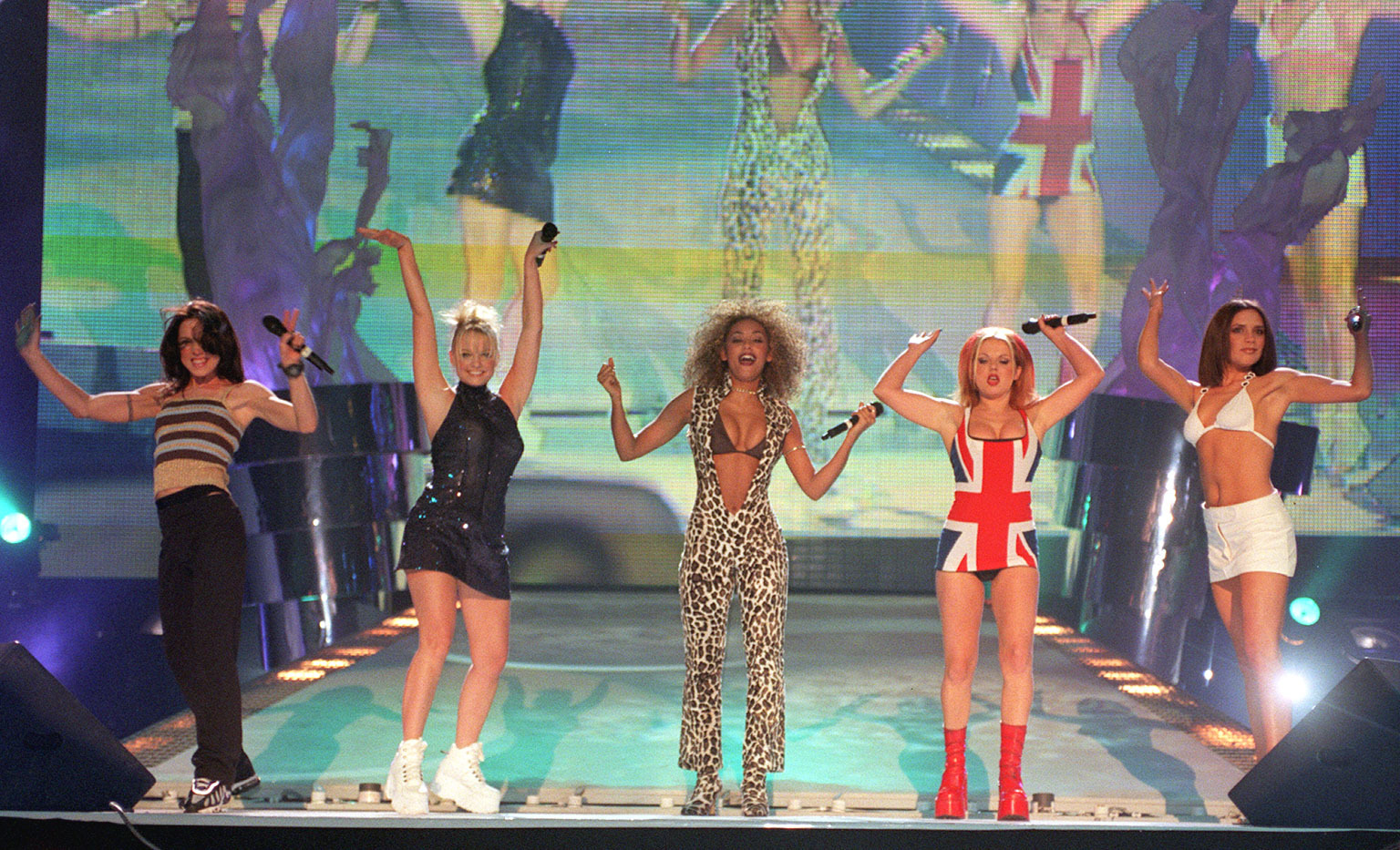 Easily the most memorable Spice Girls fashion moment came at the 1997 Brit Awards.

The pop stars were at their peak, and each member’s outfit was the perfect crystallisation of their signature style, from Mel B’s leopard print jumpsuit to Halliwell’s iconic Union Flag dress. 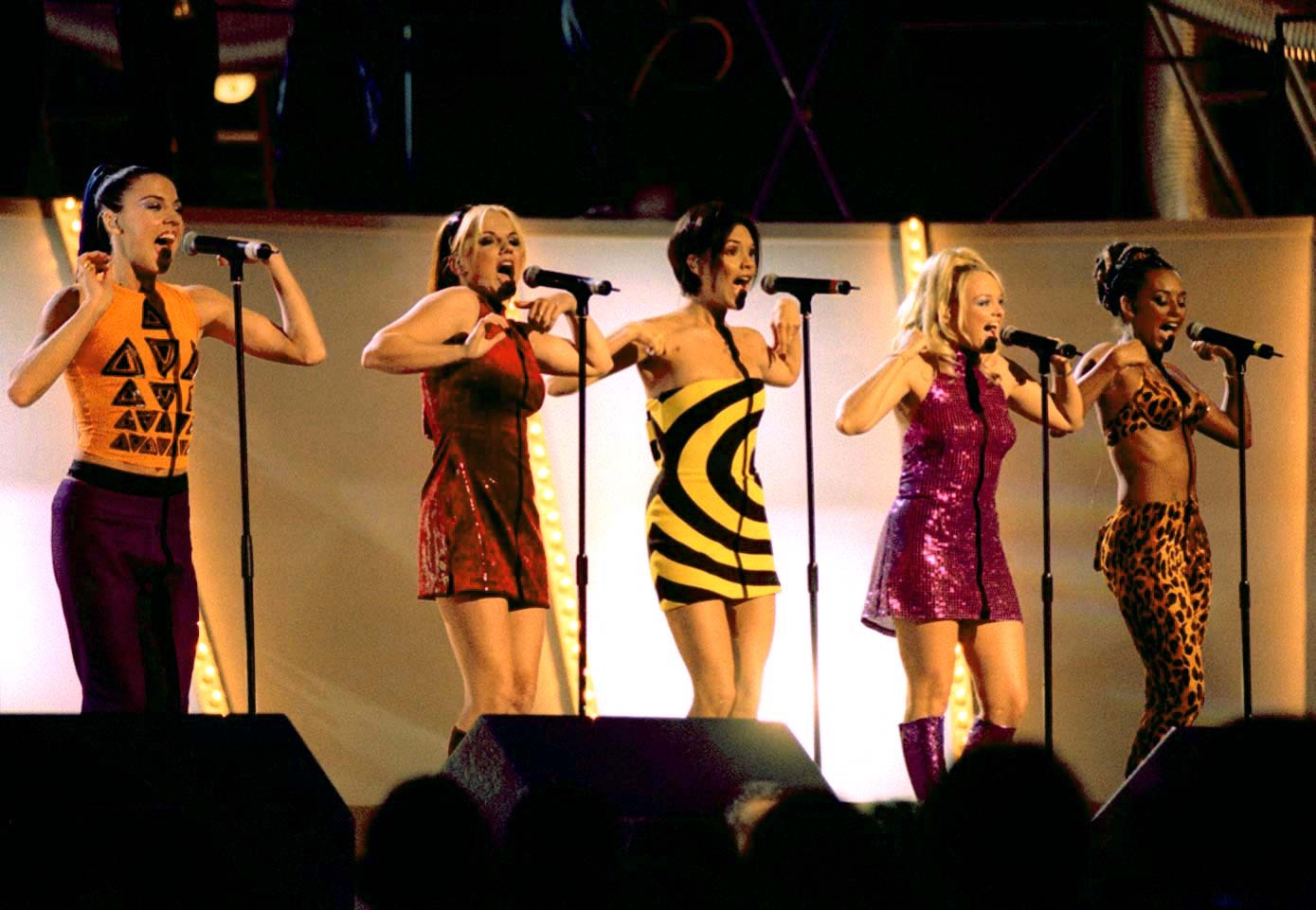 The following year, the band was back and looking cooler than ever. Rather than trying to outdo themselves, the girls refined their style, opting for glitzy mini dresses and, for Mel B and C, cool trouser and top combos. 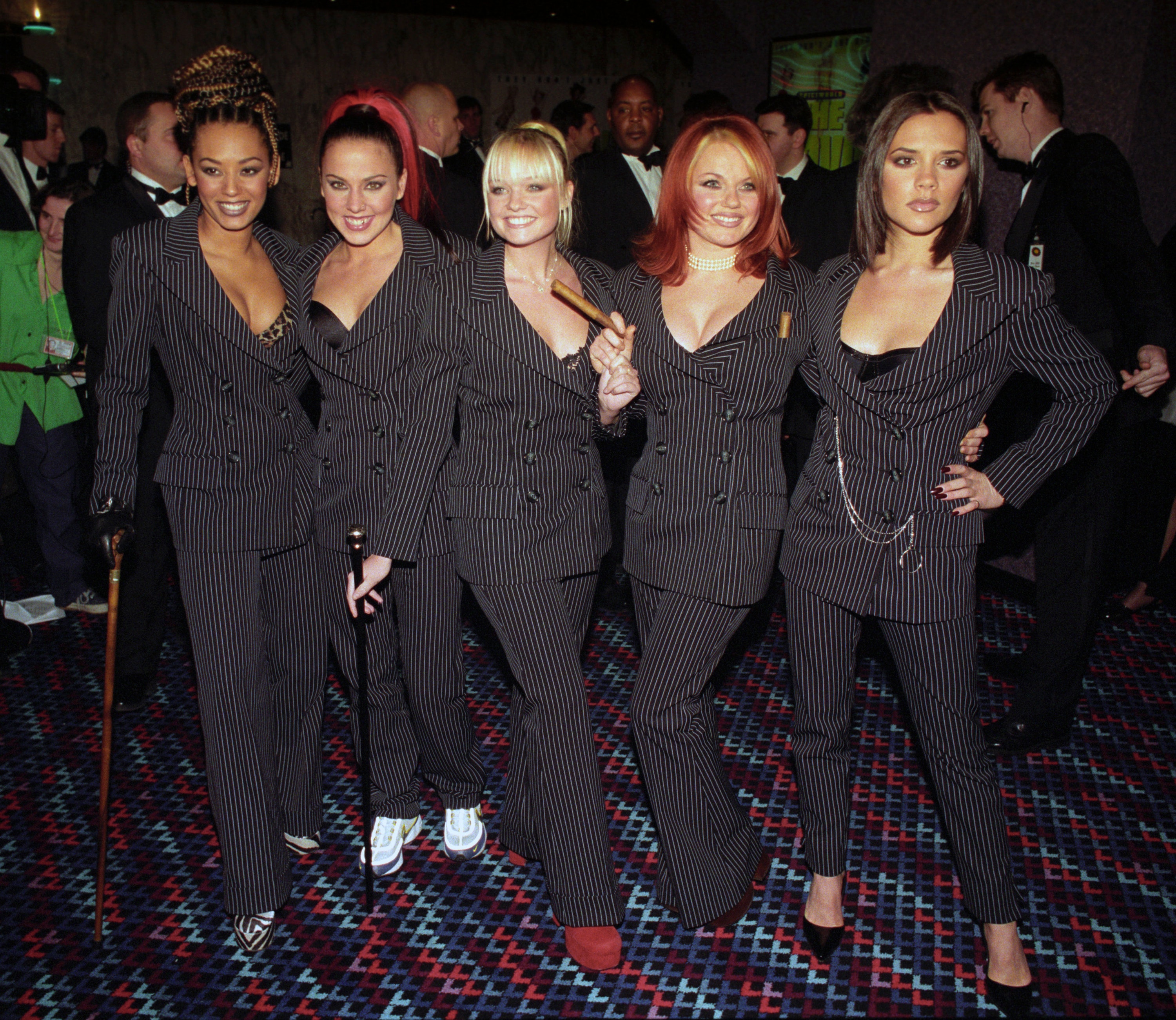 Who can forget the band’s tailoring phase, when they wore matching suits for every stop of the Spice World The Movie promo?

Each of the girls put their own spin on a classic two-piece suit, from Mel B’s leopard print bra to Mel C’s trainers. 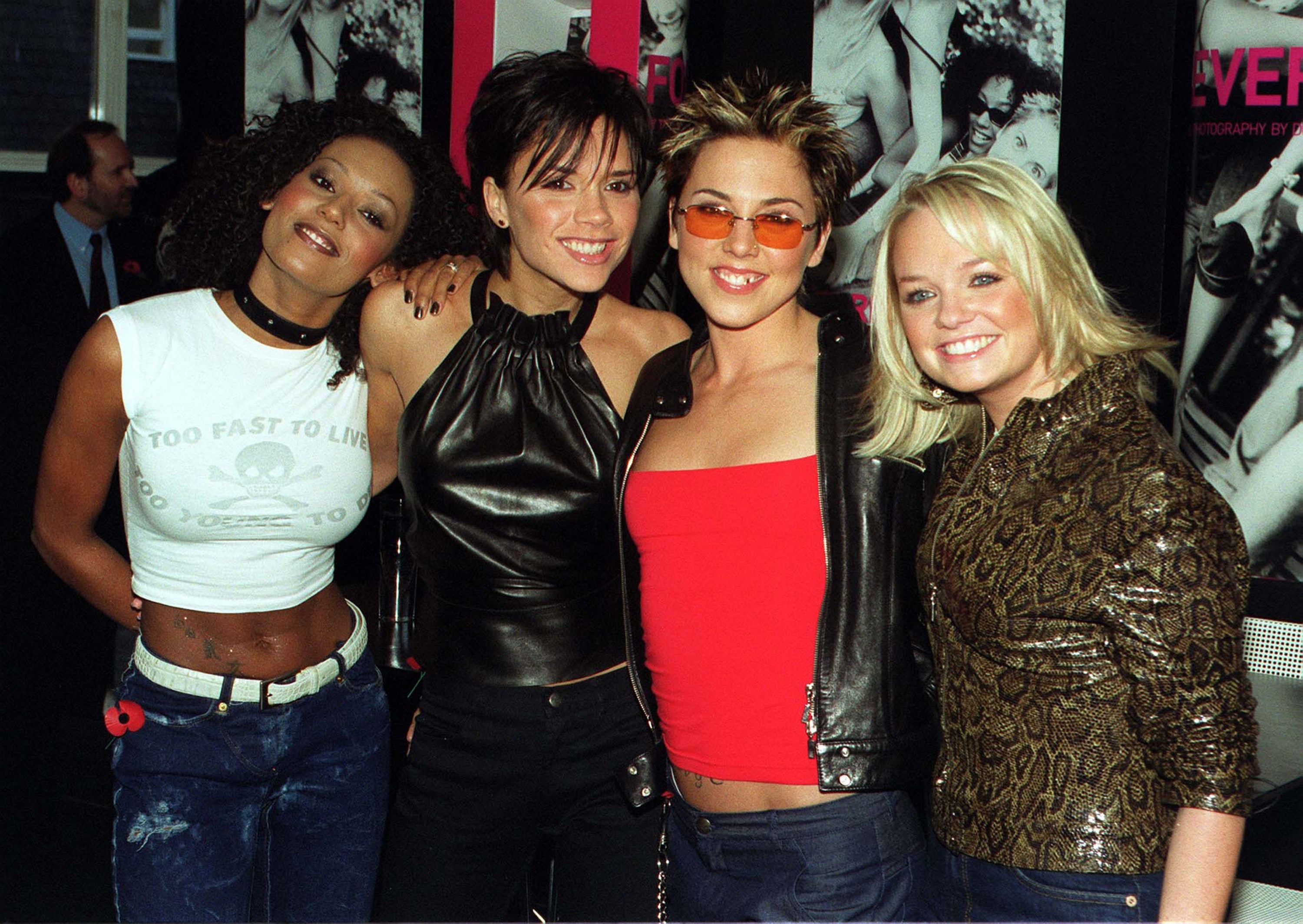 Geri Halliwell announced she was leaving the band in May 1998, and the four remaining singers vowed to continue without their Ginger pal.

This, unfortunately, is when the Spice Girls style started to go a bit pear-shaped.

It’s not their fault really – the late Nineties and early 2000s was a dark time for fashion, filled with low-rise bootcut trousers, dodgy shiny fabrics, chokers and asymmetric hemlines – and even the world’s biggest girl band couldn’t escape these trends. 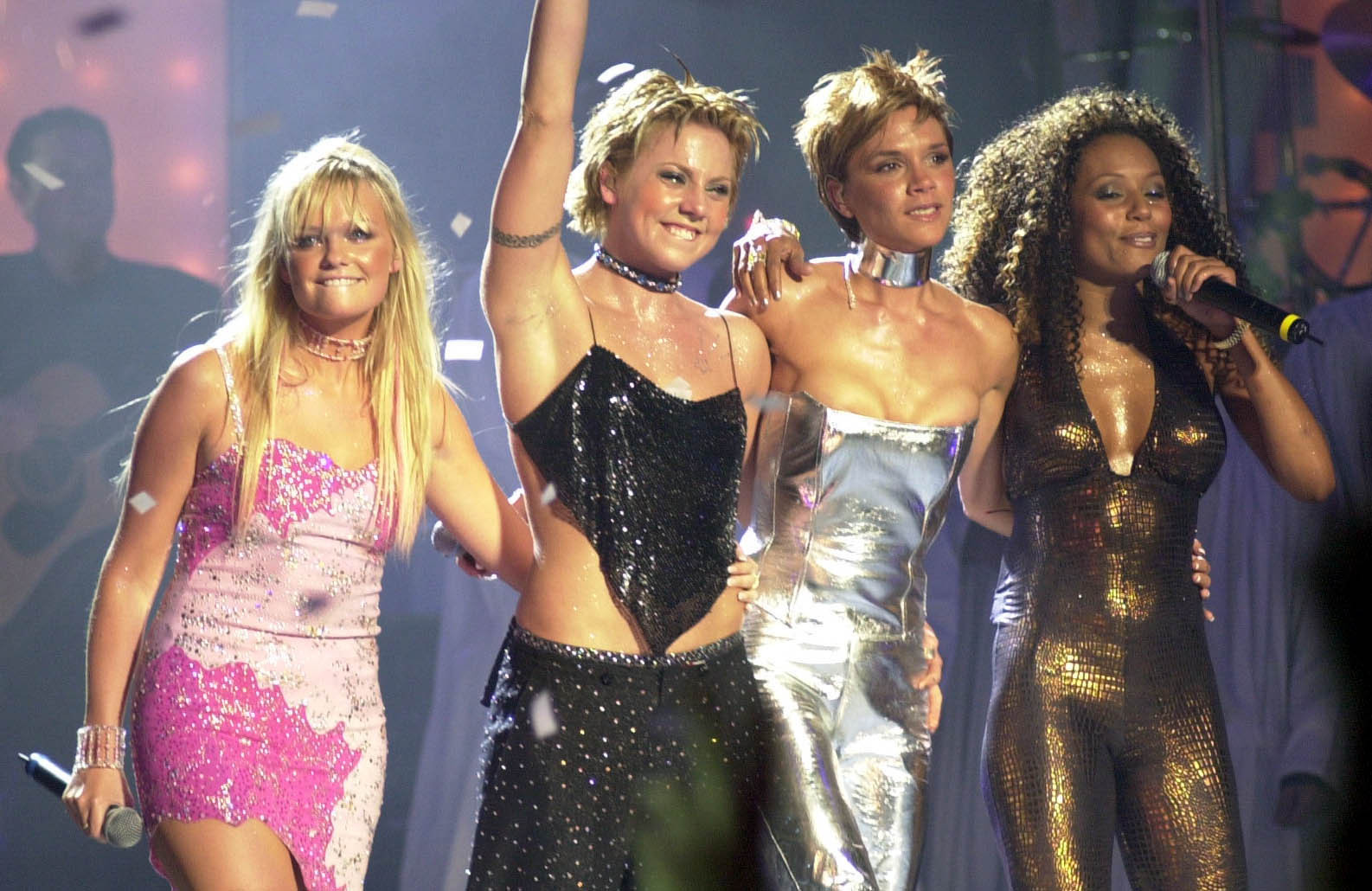 In fact, when they returned to the Brit Awards in 2000 to receive the Outstanding Contribution to British Music award, they were showcasing all of the above. 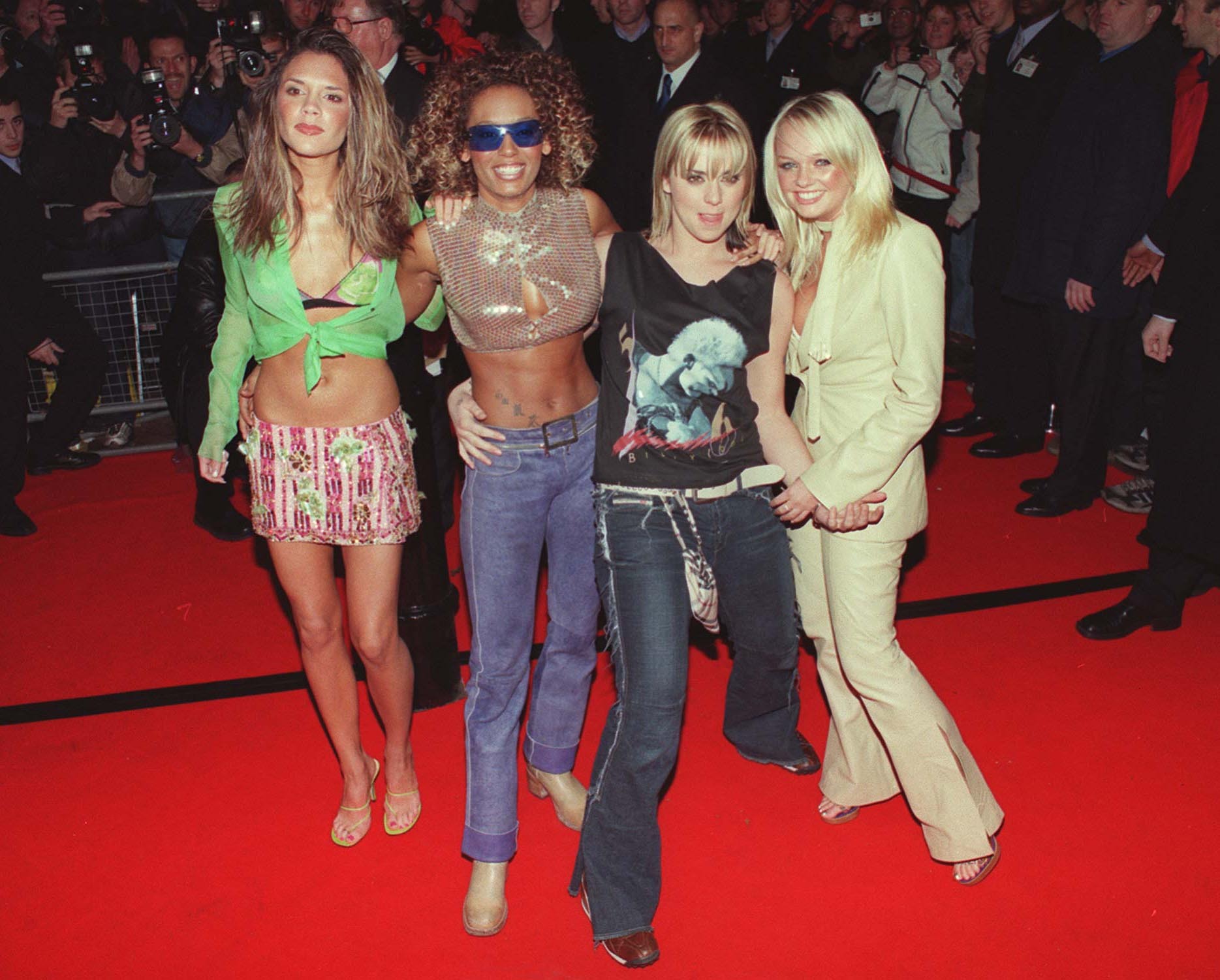 Third album Forever, released in 2000, was far less successful than its predecessors and the band’s style continued on a downward trajectory as well, with more Noughties nightmares on stage and off.

With Mel B, Mel C and Emma Bunton increasingly focusing on their solo careers, it looked like the heyday of the Spice Girls was over.

The reunion: Part one 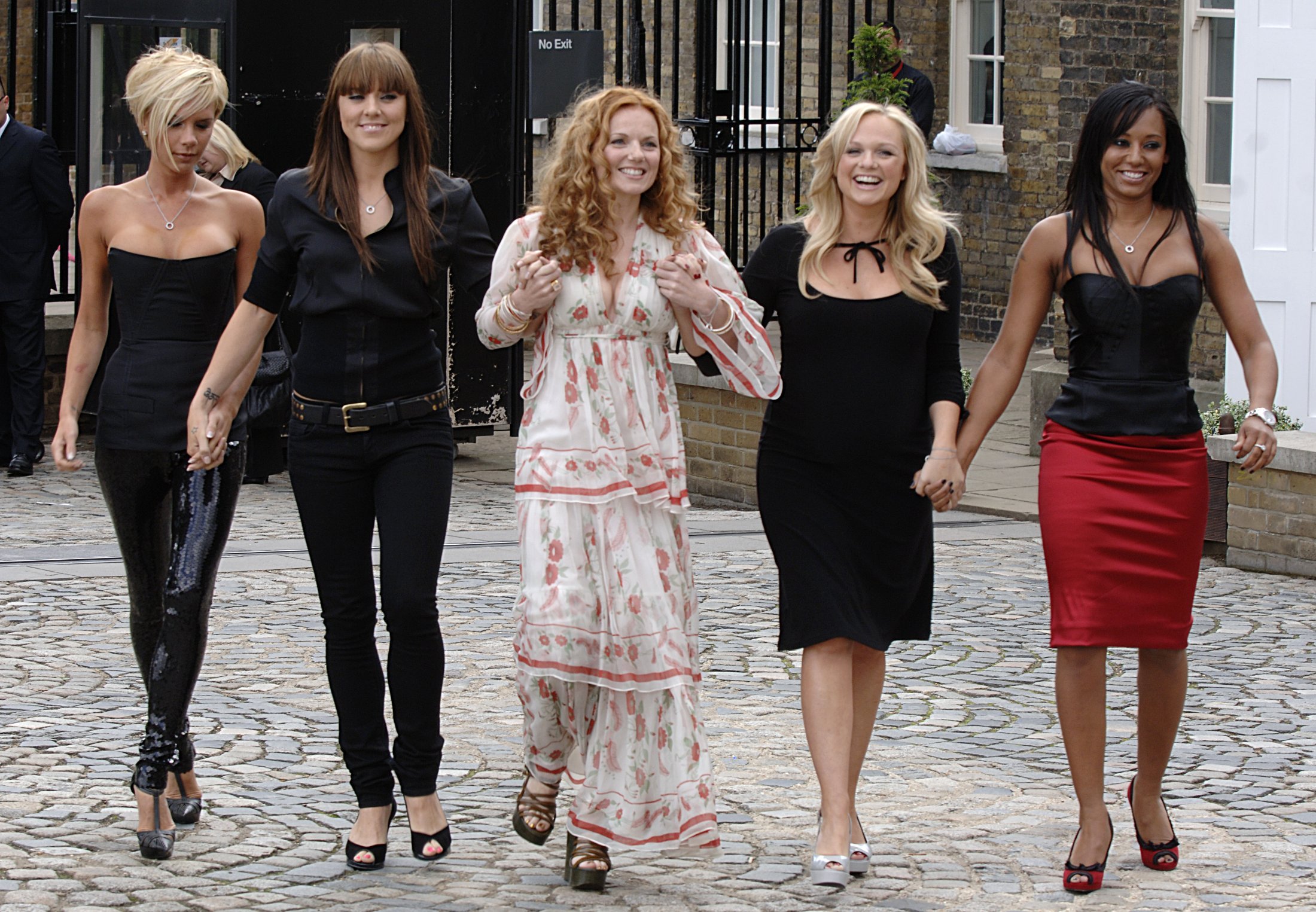 Fast forward to 2007 and four became five again when Halliwell reunited with her bandmates for the announcement of a world tour and documentary about the group.

While the four longest-serving members were matching in black and red ensembles, it looked like Ginger didn’t get the memo, looking out of place in a cream boho maxi dress – hence today’s comedy announcement video. 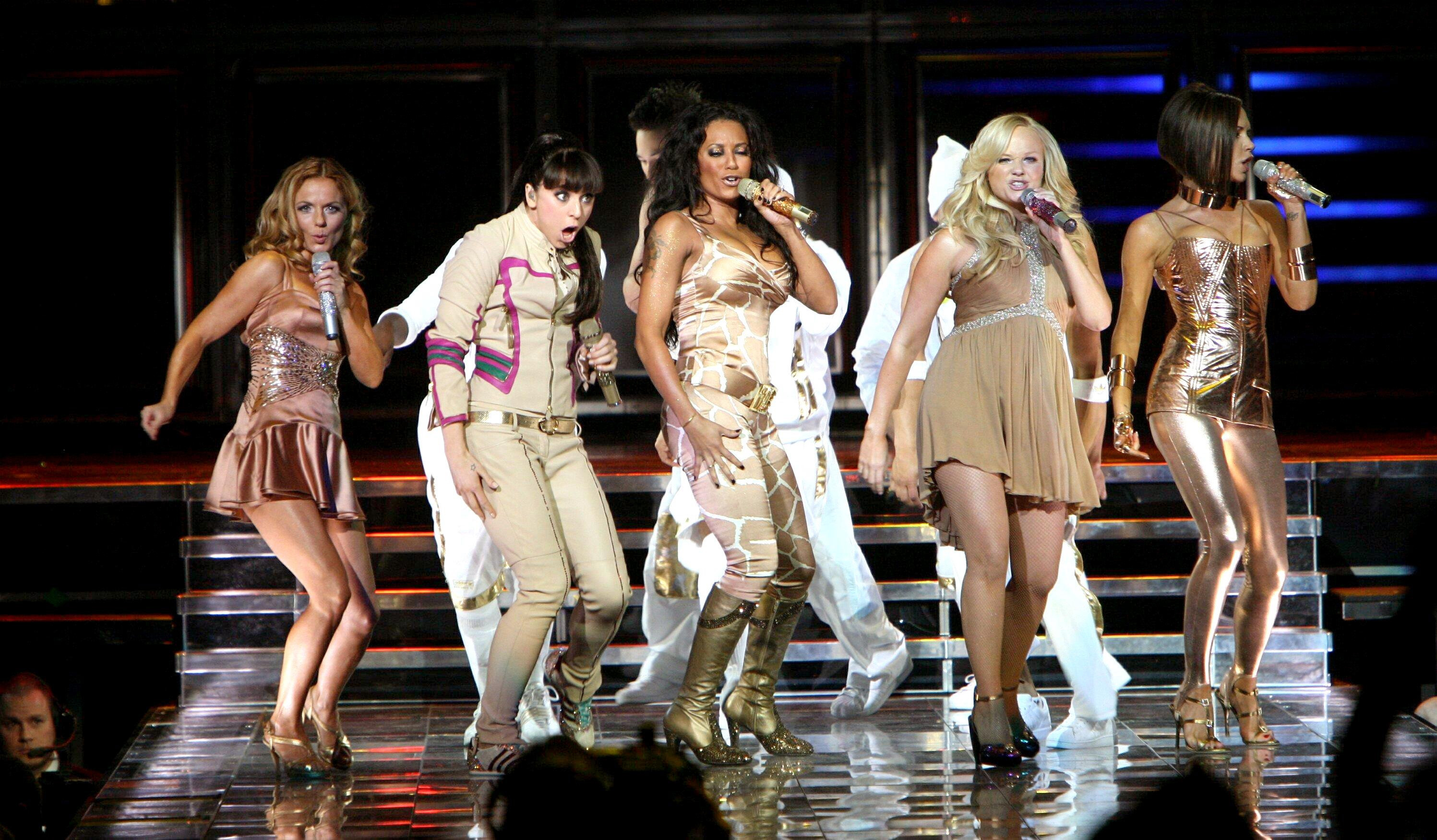 The Return Of The Spice Girls tour was fashion gold – literally – with the ladies kitted out in shining metallic numbers throughout. 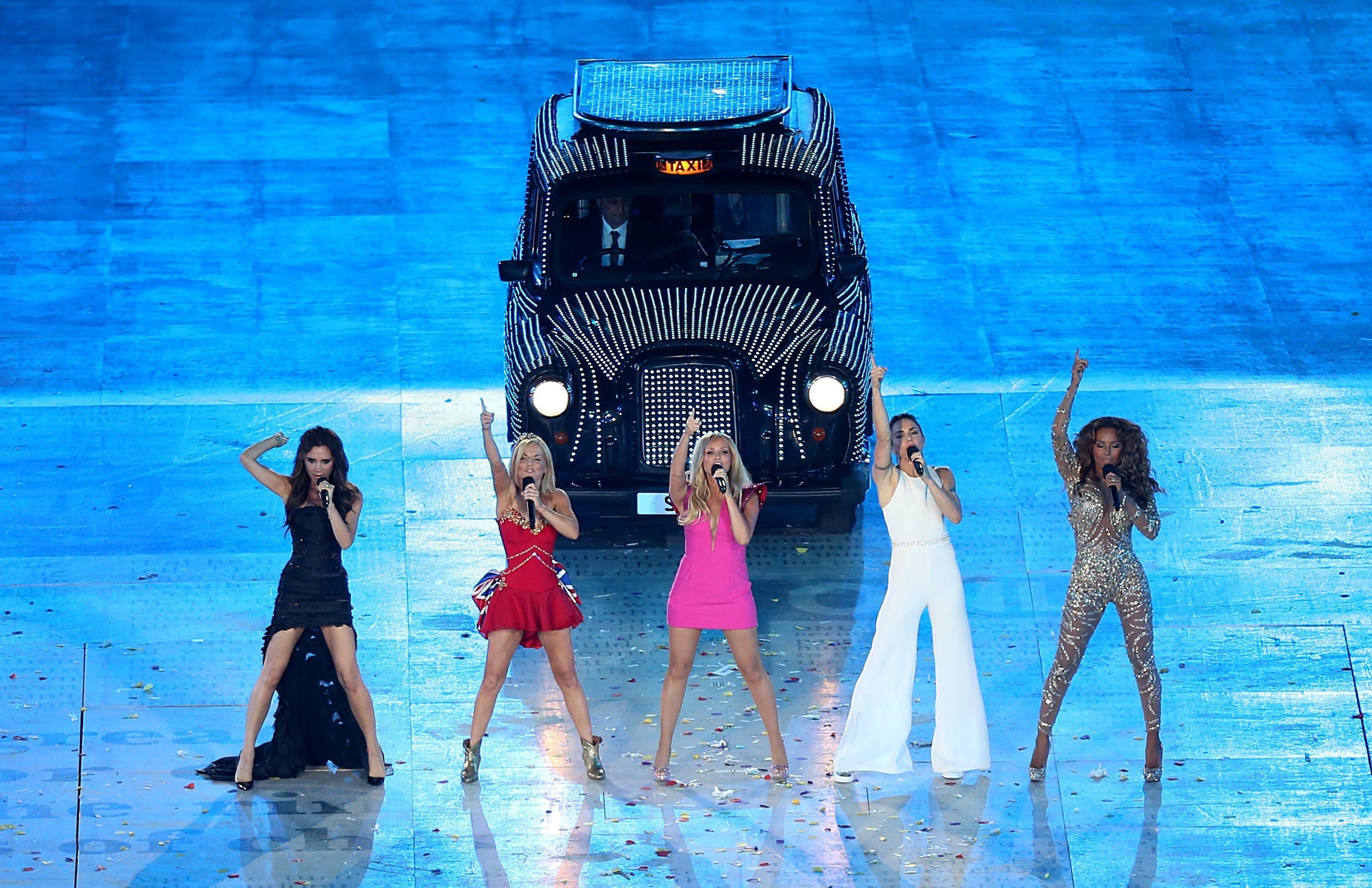 After a four-year hiatus, the group returned for a one-off performance at the London 2012 Olympics closing ceremony.

With Halliwell in a Union flag decorated dress, Victoria Beckham in a glamorous black gown and Bunton in a little pink dress, this was a return to fashion form, and became the most tweeted moment of the entire Olympics. Now that’s Girl Power.

They’ve certainly had their fashion ups and downs, but we can’t fault the Spice Girls’ outfits in the picture to announce this year’s reunion, shared on Instragram by singer Jess Glynne, who’ll be the tour support act.

Baby Spice is all grown up in a chic shirt and scalloped skirt combo (but is paying homage to the early years with pastel pink hair) and Mel C is wearing her favourite colour too, but it’s a red blouse and trousers, rather than a tracksuit.

Ginger Spice is practically brunette these days, and she looks classy in a blue strappy dress with matching heels, while Scary is anything but in a long-sleeved emerald green dress with on-trend neon heels.

Now in their 40s, the famous friends have definitely found their style groove – or maybe they just found a better stylist. Whatever the reason, we can’t wait to see what they wear on stage next year.

Tickets on sale Saturday 10th November at 10.30am – no pre-sales