The Christians will re-record their hit, Man Don’t Cry, in support of Nazanin Zaghari-Ratcliffe - The Guide Liverpool
Contact Us Advertise with The Guide Our Video Services Follow us:

The Christians will re-record their hit, Man Don’t Cry, in support of Nazanin Zaghari-Ratcliffe

Liverpool band The Christians are to re-record their hit song, Man Don’t Cry, in support of Nazanin Zaghari-Ratcliffe.

Lead singer Garry Christian will be joined by Nazanin Zaghari-Ratcliffe’s daughter Gabriella, and her husband Richard – who this month staged a 21-day hunger strike in a demonstration about his wife’s ongoing plight – on a new version of the track from their number one album, Colour.

Renamed Naz Don’t Cry, Garry says: “The song is to deliver a simple message that we are all still standing shoulder to shoulder with Nazanin, her devoted husband Richard, and her beautiful daughter Gabriella.

“It’s absolutely desperate after all these years that she still hasn’t been released back to her family.

“If only it can help in some tiny way.”

Nazanin Zaghari-Ratcliffe was taking Gabriella to see her family when she was arrested and jailed for five years in 2016 after being accused of plotting to overthrow the Iranian government.

She spent four years in Evin prison, and is now living under house-arrest in Tehran. The 43-year-old charity worker received yet another year’s sentence of confinement in April this year for allegedly ‘spreading propaganda’ – an accusation she denies.

There are now concerns that Mrs Zaghari-Ratcliffe, a British-Iranian dual national, may be sent back to prison, and her family is calling on the British government to do more to secure her release and help her get back to her family in Britain.

The Christians have been following Nazanin’s story for many years after chatting with fans about her after a gig.

Christians’ manager, and Garry’s wife, Emma Roberts thought then about how the band might help. 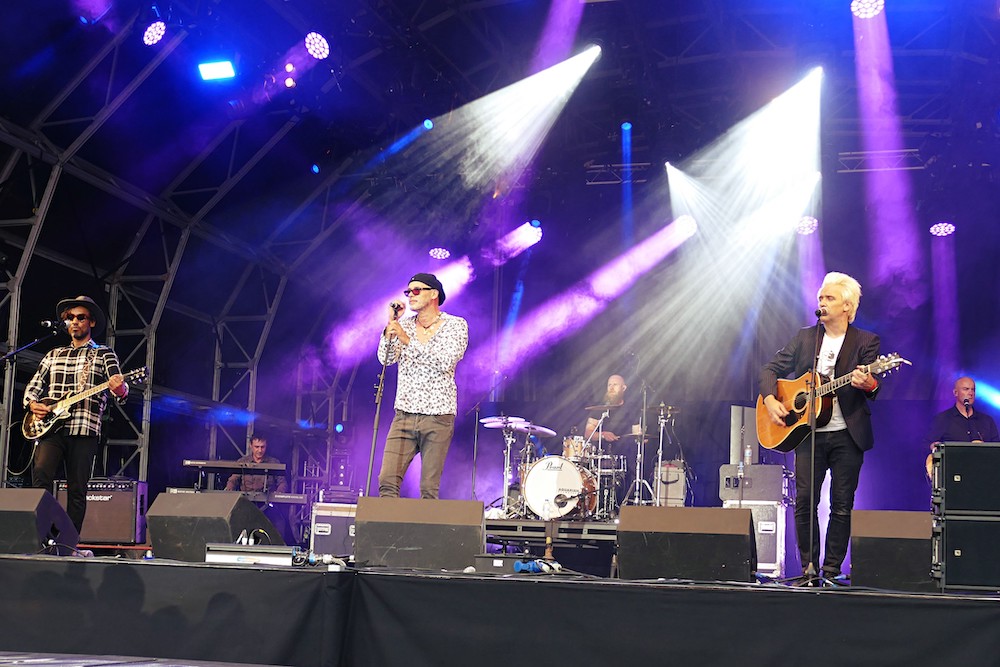 She says: “We talked about how the words from ‘Man Don’t Cry’, originally written about John McCarthy, the British journalist being held hostage in the Lebanon, and released in 1991, couldn’t be more appropriate in describing the Ratcliffes’ distressing predicament, although then it was John’s girlfriend, Jill Morrell, who was campaigning for his release.

“We talked ourselves out of it thinking the band’s profile wasn’t big enough to make a difference and the years rolled on, but after seeing Richard Ratcliffe recently on his hunger strike, we just couldn’t bear not to do anything.

“We decided to record ‘Naz Don’t Cry’ with all download proceeds going to REDRESS, an international human rights organisation which has helped get Richard out to Iran and raised awareness, and secured diplomatic protection in the UK for Nazanin.”

And Emma adds: “Our hope is that people like the track and download it and it raises awareness and puts pressure on the Government to do more.

“It’s a way of saying ‘we haven’t forgotten you’. There are words, now slightly changed to ‘she’ and ‘her’, which include ‘I hope she knows she’s still in our prayers, I only hope she knows that there are people here who care’.”

Garry will record the song with fellow band members including writer Henry Priestman, Richard Ratcliffe and Gabriella, at Coastal Sound studios in Liverpool.

Everyone involved, including studio owner Tim Speed, have agreed to waive all fees.

Naz Don’t Cry will be released via Island Records and available to download on iTunes and other music platforms after it’s recorded tomorrow.

Emma says: “Hopefully it will gather momentum and achieve something. Hopefully people will do something.

“The worst that can happen is that no-one buys it, no-one listens.

“The best that can happen is that people listen, loads of people love it, people get talking and someone gets Nazanin out.”

Find out more about Nazanin’s campaign for freedom with Amnesty International HERE.