The Fab landmarks that made Liverpool so special...Paul McCartney's step mum Angie remembers some of her favourites - The Guide Liverpool
Contact Us Advertise with The Guide Our Video Services Follow us:

There seems little that can’t be sorted in life over a catch up and a cuppa. Angie McCartney, widow of Sir Paul’s late dad Jim would certainly agree with that – especially in lockdown life today.

She may have swapped her Merseyside roots and the commercial world of Littlewoods for the glamour of the Hollywood Hills where she’s had a host of top media jobs, but Angie McCartney still starts each day with a ‘nice cup of tea’.

In the ‘70s Angie, now 90, even started her own organic tea business – Mrs McCartney’s Tea – which is still going strong.

An author – and a regular guest on Pete Price’s live talk show on Radio City – Angie has entertained millions with stories in her book, Your Mother Should Know: A Life with The Beatles. And her first book “My Long and Winding Road”.

And, like many of us coping in the current climate, she’s been reminiscing with the rest of us about the good old days… 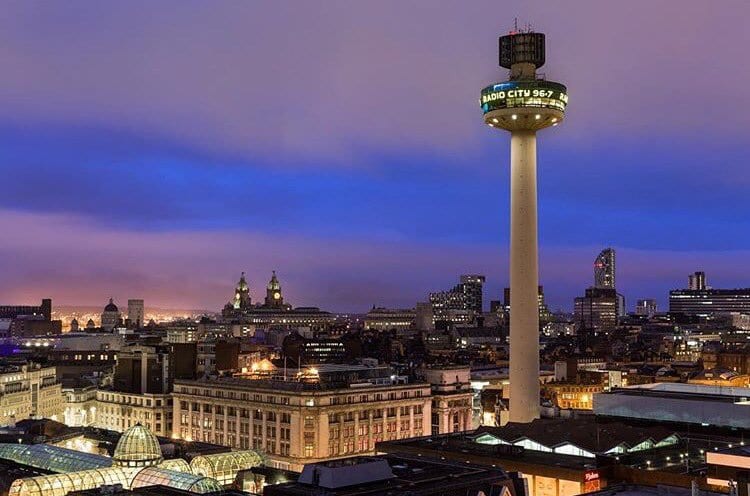 The Tower which eventually became Radio City was originally a restaurant. It was a stunning experience to go up there for a meal and have the restaurant slowly revolving. I remember going to the ladies room, and when I came out, my table had gone! I thought I’d had a little too much vino, then one of the waiters explained to me that the toilets were in the core of the tower, which did NOT move, but the outside section did. 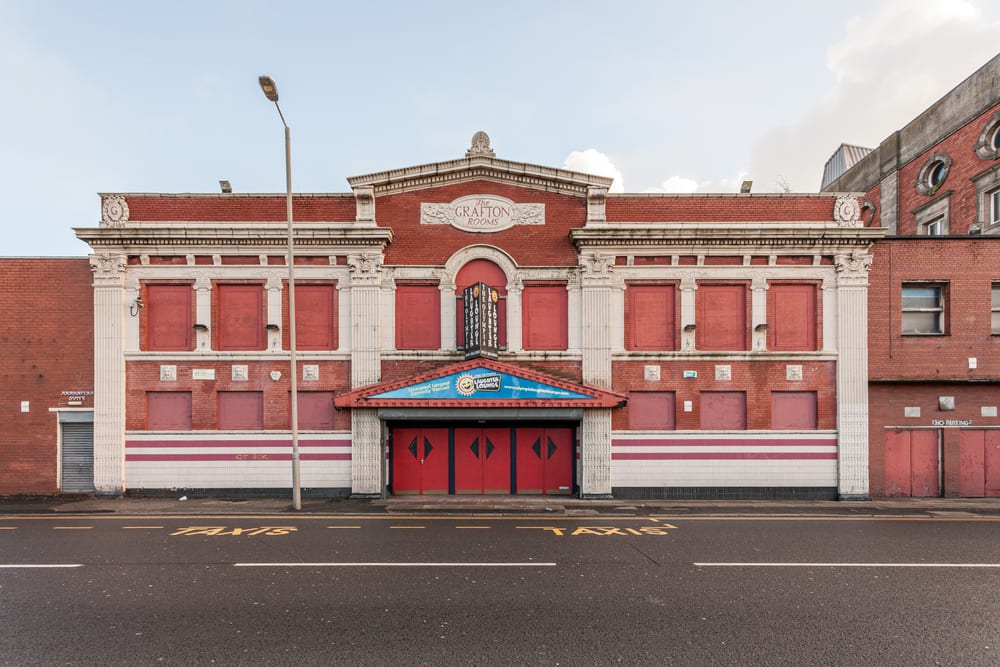 When I was young, The Grafton was the place to go for great ballroom dancing and big bands… the likes of Joe Loss played there. I remember the majestic marble steps when you entered, it all seemed very grand. It was originally opened in 1924 … The Jazz Age, and greats like Victor Sylvester, Henry Hall, and Duke Ellington who played there. In more recent times, a young up and coming bunch called The Beatles played to about 200 people!

I used to love going there in the afternoons. It’s where I met my first husband, Eddie Williams. In those days, people had “dancing shoes” separate from the ones you went outside in. The cloakrooms were always a hotspot with all the gals freshening up their make-up and changing their shoes before venturing out into the ballroom to sit, hoping someone would ask them to dance.

The last I heard it may be reopening as a Comedy Club. It would be great to see the old place restored to its former glory.

MORE - Do you recognise any of these 11 oldest known shops in Liverpool? 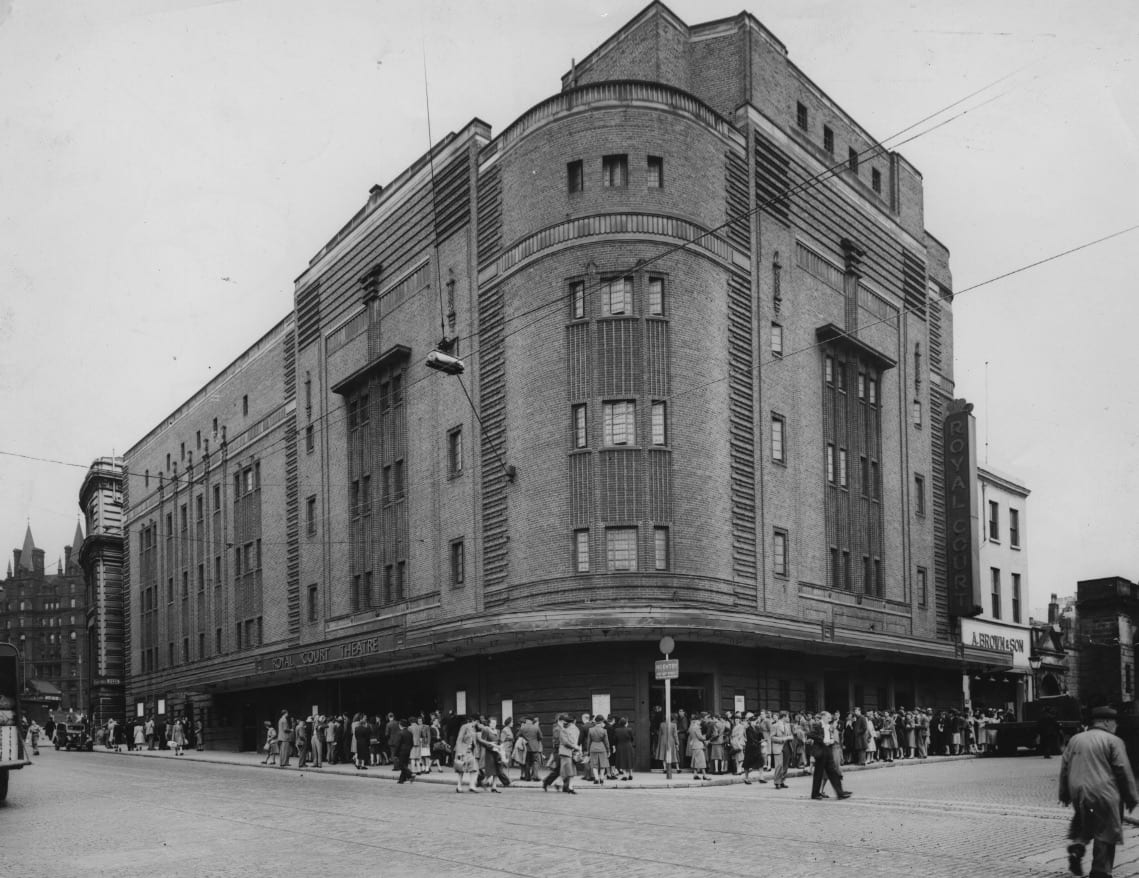 This was a real favourite of mine, and I got a job there as a junior box office clerk when I was just over 14. My greatest recollection was of May 8, 1945, when WWII ended. Noel Coward was starring there in his production of Sigh No More and decided he’d throw a party on the stage after the show. I happened to say there was no way I’d be allowed to stay out that late. One of our ladies told Mr. Mason, the Manager, of my plight, and he had a quick word with the Maestro, who summoned me to his dressing room. Boy, was I thrilled. He asked me what my mum’s name was, and proceeded to write a lovely letter to her, signed it with a flourish, carefully folded a big white five-pound note and put it in the envelope. He said: “There now child, go home, tell your mother I will make sure you are in good hands, and I’ll see you back here after the show. Get yourself some taxi rides, and put on your best dress.” 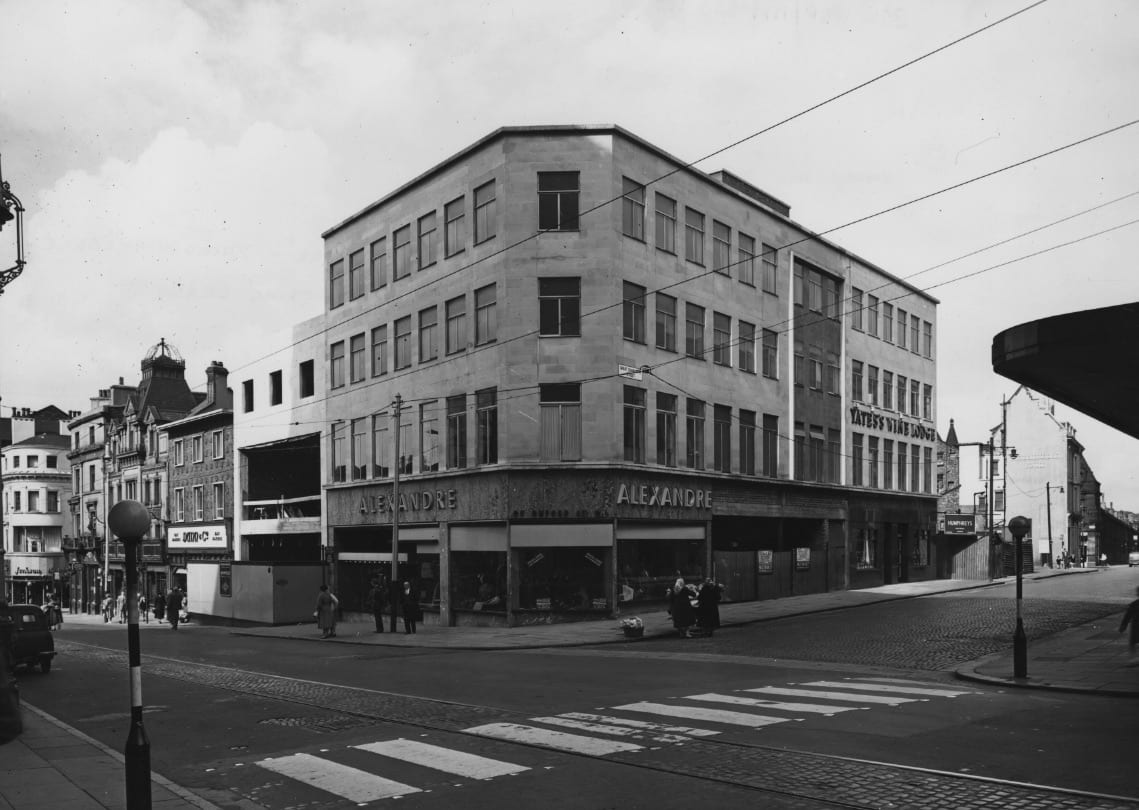 When I worked at Littlewoods we had the day off on Thursdays, so Mum and I would usually sally forth on the 14 tram and make our first stop at this great place. There was sawdust on the floor, and lots of lovey old biddies surreptitiously refilling their glasses from their secret stash of wine in brown paper bags, hidden under the table. They served a magnificent brew called Australian White Wine. (“Aussie White”). You could get absolutely out of your mind for about two shillings. A couple of those down your neck, and you were off to take on the world, well, Blackler’s and Lewis’s anyway.

Singing was always the order of the day and there was usually a bloke playing the spoons, someone with a harmonica or a squeeze box, and a general feeling it was New Year’s Eve – even in summertime. 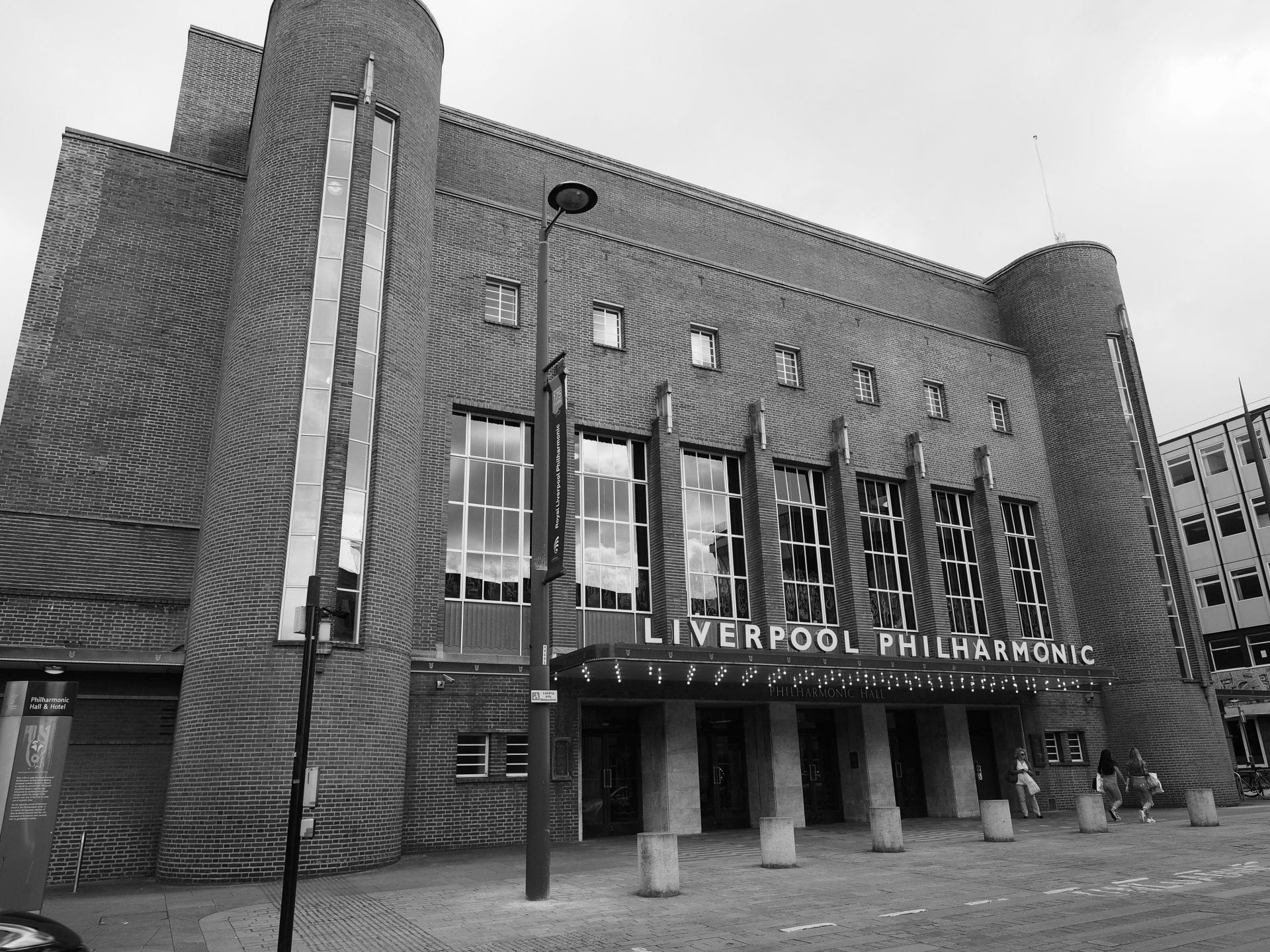 In my early teens, I developed a love for Classical Music, and I’d save up my pennies to go to see Sir Malcolm Sargent conducting the Philharmonic Orchestra. Little did I think I’d be on that stage in January 2013 for the launch of my first book: “Your Mother Should Know”, ably emceed by Pete Price, with several Beatles Tribute Bands flown in from all over the globe. I even had bodyguards who would talk into their wrist watches (like the CIA) and refer to me as “The Asset.” 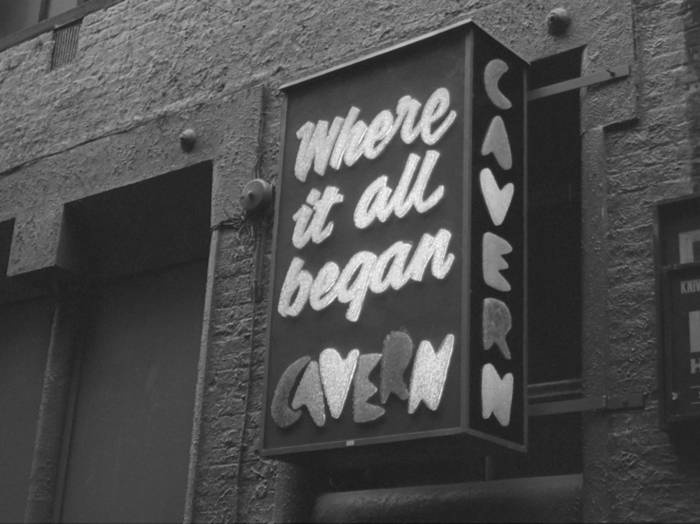 I used to sneak out of work across town on Cases Street to pop into the Cavern sometimes for their lunchtime sessions. My lasting memory is the pong that would drift up the nostrils as you made your way down those sloping steps into the steaming basement, that smelled of old fruit. They’d start out with rows of chairs across the room, but in no time, the kids would move them to the side so they could do their “Cavern Stomp” and get their groove on to the group that was giving it the bells that day.

Cilla Black was the cloakroom gal. There was no alcohol, just cokes and coffees, dreadful brown watery stuff, but who cared? I’d stay as long as I dared, and slink back to my office job at the local Littlewoods Personnel Office near Clayton Square.

Clayton Square and The News Theatre 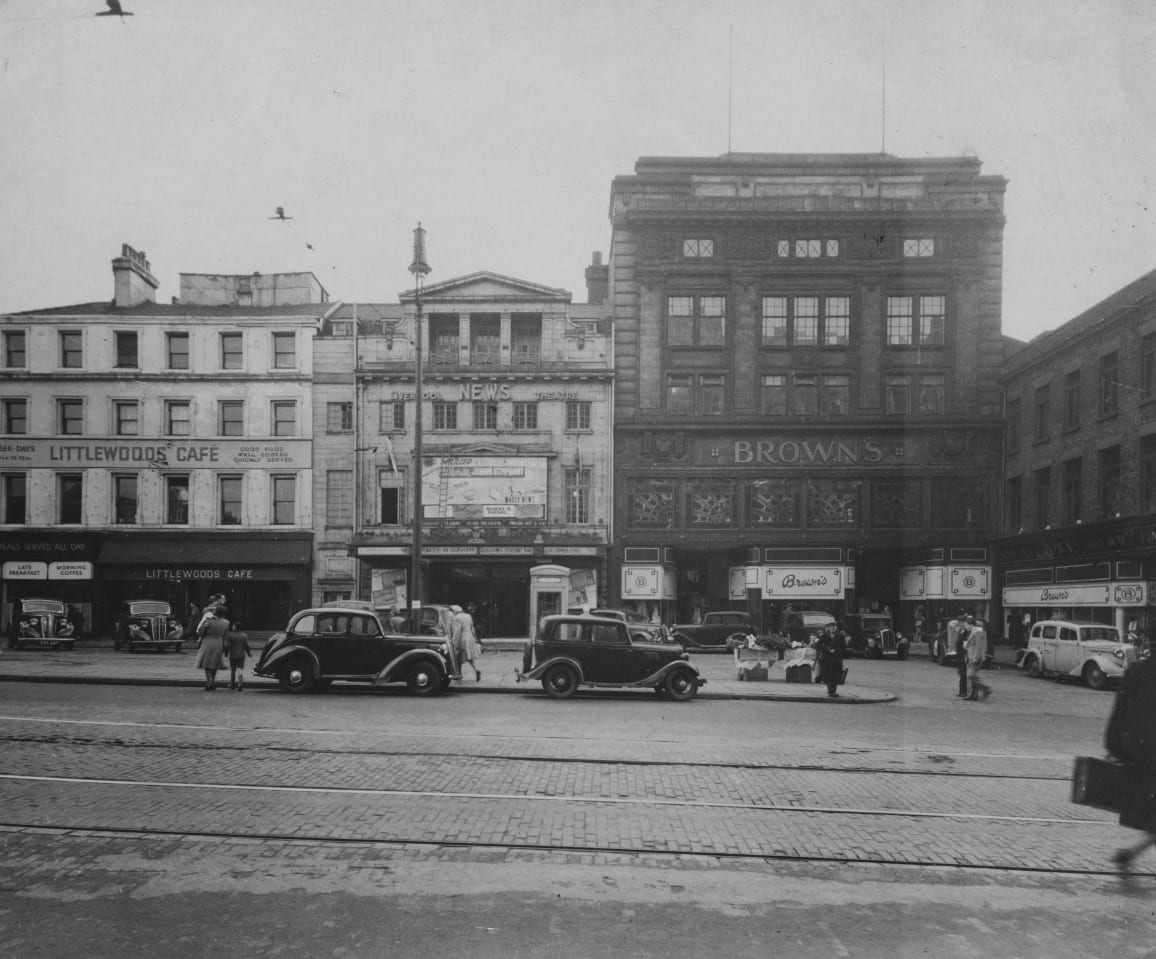 In Clayton Square shawlies would hawk their fruit, veggies and flowers. They were mostly very large ladies, dressed in black, with bad feet, warts, hairy chins (who am I to talk) and massive floral pinnies with big pockets full of change. They would out yell: “Ee-are, lemons, luvly lemons, tuppence each. Buy me last 3 and I’ll give yer 4. Ask for 5 and I’ll blind yer.” They’d start their days at the markets in the small hours, buy whatever they could, and drag it along to Clayton Square, and get set up when people began to get off the trams to go to work.

Then came the excitement of the News Theatre which opened up behind them – all they ran was newsreels, and people would go there for various pastimes (not all of them watching the screen). I was pretty naive in those days and didn’t realise the profession of many of the “ladies” who hung around outside. 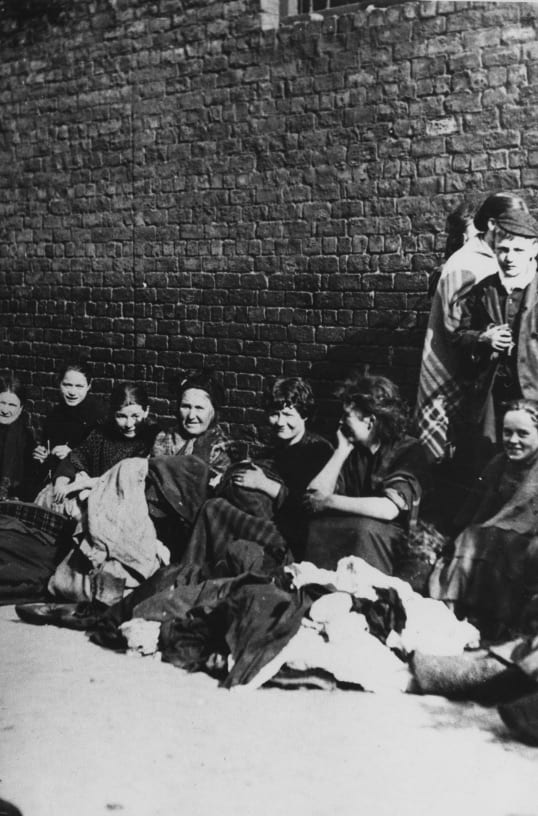 My daughter Ruth and I used to love sneaking off to Paddy’s Market on Scotland Road. We’d buy all sorts of stuff we didn’t need – we once bought an astrakhan coat with a fake fur collar from Cilla’s mam, who had a stall there. Another time, I bought a chenille table cloth and put it in the Bendix washing machine, only to find out after that the lint drawer underneath was crammed tight with little shreds of maroon coloured wool, and the only thing remaining in the drum was a well washed but threadbare piece of canvas.

Aintree Racecourse and the Grand National 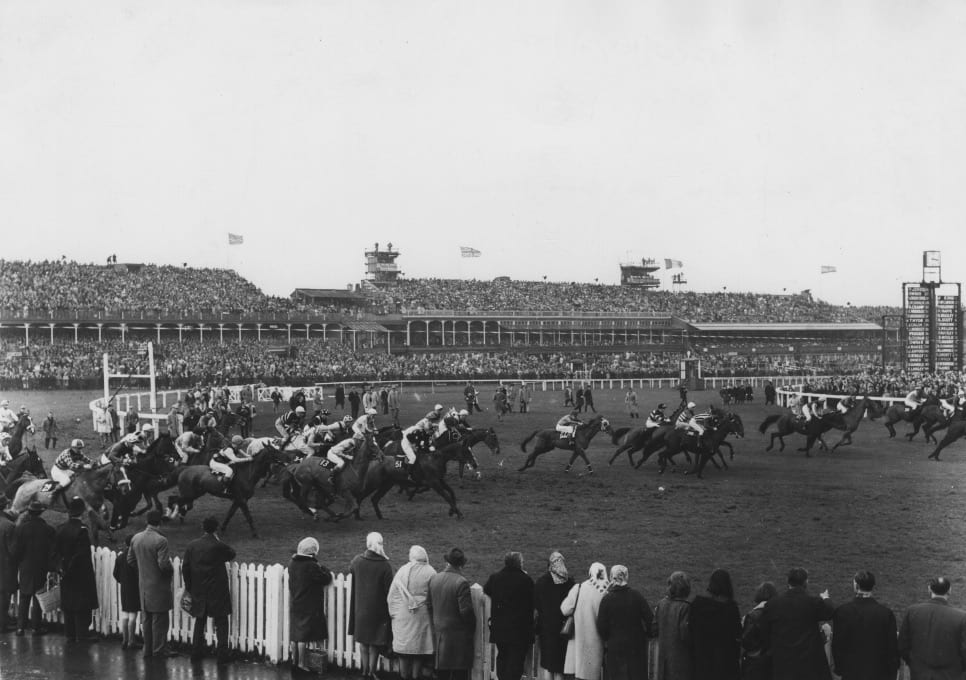 When Jim was given Drake’s Drum, the beautiful gelding Paul bought for him for his 62nd birthday, he had him stabled with Colonel Lyde up in Yorkshire. Then, as Jim’s health became an issue, we had Drakey moved to Crossley’s Farm close to us in Heswall. The big day came when he was entered in the Hylton Plate, the race which ran immediately before the Grand National. What a thrill it was to watch him running over the finish line, and a dream come true for Jim who’d always loved the gee-gees, never dreaming one day he’d be an owner. Paul and Michael were with us and we had a small family party that night, with Jim’s brother Joe and his wife Joan, his beloved sisters, Milly and Ginny, plus some of the Crossley family. This beautiful animal retired to Paul’s farm when his racing days were done.

Visit Mrs McCartney’s Organic Teas to browse the product and find out more about Angie here.