The Responder: Martin Freeman says cracking the Scouse accent for new police drama was like passing a test - The Guide Liverpool
Contact Us Advertise with The Guide Our Video Services Follow us:

The Responder: Martin Freeman says cracking the Scouse accent for new police drama was like passing a test

He’s appeared in blockbuster films like The Hobbit, and TV series from Sherlock to The Office, but there was one challenge Martin Freeman faced in his latest drama, The Responder, that he’s never had to tackle until now – a scouse accent!

“I haven’t played a character with a Scouse accent before and I was incredibly mindful of that when I was reading the script,” says Martin.  “It read pure Liverpudlian to me and I knew Tony (writer Tony Schumacher) was from Liverpool.

“He always said to me that the character didn’t have to be from Liverpool, but I really felt Chris – Martin plays police responder Chris Carson – had to be from the city. I also knew that if I couldn’t do it properly then I wouldn’t do the accent, I would just have done my own voice.”

Martin spent 18 months before he filmed the new BBC One series talking to himself in a Liverpool accent and it’s a process that seems to have paid off.

“I was really pleased when I heard that some of the Scouse actors asked if I was from Merseyside – it was like I’d passed some sort of test,” he smiles. “I worked really hard at it because there was no way I was prepared to go on telly doing a terrible Scouse accent in Liverpool with a load of Liverpudlian actors. There’s just no way. I’d get taken to the cleaners and rightly so.

“You just can’t be doing a bad Liverpool accent.”

The Responder is a five-part drama series which starts on Monday, January 24.

Martin’s character is a first responder working on the front-line of Liverpool policing, and it’s his job to act when emergency calls come in throughout the night.

Life is tough for Chris. He’s been demoted from detective inspector to PC for perceived corruption, and the job has pushed him to the edge. Desperately trying to hide his mental health issues from his wife and daughter, he sees a work-mandated therapist but the job, plus his relationship with Carl, a childhood friend and local drug dealer, is sending him to a place where he thinks the best thing for everyone is if he leaves. 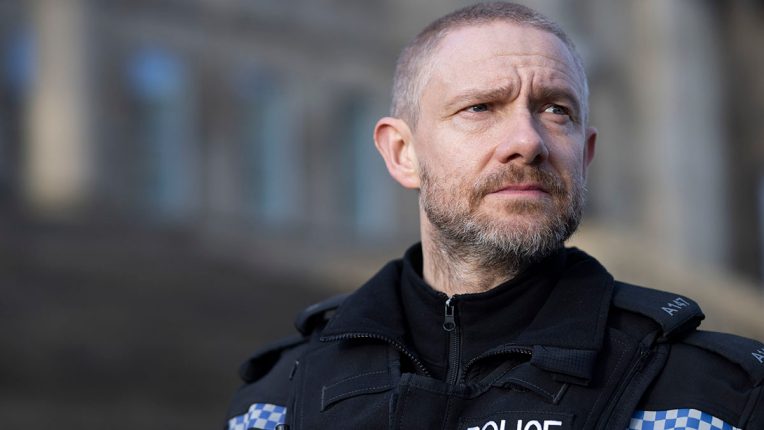 It’s a part which excited Martin: “The reason I wanted to play Chris is that he is a great mixture of vulnerability and strength. There is something about a man of few words that is attractive; there’s a reason why people like characters that don’t have to over-explain themselves.

“Chris is very intelligent, he’s emotionally smart, but he’s a copper. He finds it hard to be open at home and with his counsellor, and in his job it’s probably wise not to be open so he picks his moments when he can let off steam and talk to people. But those are few and far between, and the amount of plates he is spinning is frightening.

“If he drops even one of those plates, he could wind up dead.”

The story takes place across five nights, with one night per episode, so there’s a lot packed into each.

“Chris has got himself mixed up in activity that he shouldn’t be involved in, and he’s been partnered with a new trainee police officer who doesn’t like him and suspects him of being bent,” says Martin. “He’s got very little time for some trainee who judges him, plus, his marriage is falling apart. He wants to be a good dad and I like his dynamic with the family – he’s such a loving person but he just can’t seem to make it work.”

It’s a familiar occurrence for Martin, who says he rarely plays characters without problems.

“I never seem to play the guy getting off the yacht with a mojito in his hand,” he grins. “It would be nice to wear linen and sunglasses but, no, I always seem to put myself in situations where I’m trying to stay alive.”

And he adds about Chris: “I shouldn’t love him, but I do. Who among us hasn’t messed up at some point?”

Filming The Responder in and around the city has been a joy for the actor who admits he’s lucky to now be in a position to work when and if he wants to, and that he’s still offered great parts.

Martin says The Responder is like nothing he’s ever read before – ‘and I love being excited by scripts because every time you get a script you want it to be The Godfather’.

But even he was worried it was an ask too far for him: “I have a reasonably healthy ego but there were several times in the run up to filming that I asked Tony, and producers Chris and Laurence, if they were sure they had the right man for the job, and couldn’t they get someone better than me.

“Then Tony said that he’d had me in mind when he wrote it and kept seeing me in scenes, so that really relaxed me.”

The Responder, he says, is unique: “It’s a drama that doesn’t offer answers but asks a lot of questions. There’s nothing neat about it, it’s chaotic and unsettling.” And that, Martin adds, makes it authentic.