The 'Scouse Flowerhouse' adds colour to main roads and major routes - The Guide Liverpool
Contact Us Advertise with The Guide Our Video Services Follow us:

Liverpool’s main roads and major routes have been given a touch of colour, all part of the Liverpool Wildflower Gateways Project.

The Liverpool Wildflower Gateways Project is a partnership between Liverpool City Council and the National Wildflower Centre at the Eden Project.

Now in its second year, the project, affectionately known as the ‘Scouse Flowerhouse’, takes in locations across Liverpool including Croxteth Park, Longmoor Lane, Ullet Road and Everton Park.

A small band of intrepid flower advocates and sowers led by Richard Scott, Director of the National Wildflower Centre and based here in Liverpool, have been taking to the grass verges, public green spaces and central reservations to plant millions of tiny seeds.

The sites have been prepared by Liverpool-based arable and urban farmer Dave Roughley, before being sown by Dave, Richard and fellow volunteer Bradley Hampson.

Last year the planting became a real community event in certain parts of the city, with residents taking part in mass sowings.

MORE - “Be Patient, Be Kind, Be Responsible” is the message from Liverpool ONE ahead of reopening

This year the group have been encouraging residents to get involved in a socially-distanced way by leaving packets of seeds on people’s doorsteps.

The choice of flowers has been specially chosen to reflect the country’s wild heritage, with many varieties such as Cornflower, Corn Poppy, Corn Chamomile, Daisies and Red Campion and Meadow Buttercup – originating in cornfields.

In addition to these wildflower areas the city has many wild areas within parks where grass is left to grow longer to encourage wildlife. 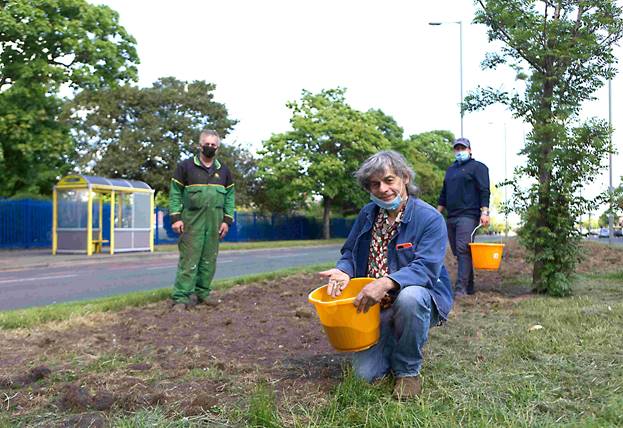 The council’s grass cutting service has begun again on verges which are close to public highways, this is to ensure the right level of visibility for vehicles, cyclists and pedestrians. However, there are some verges where it is suitable to allow grass to grow longer and encourage more diverse planting. The council is continue to identify suitable sites across the city.

Some of the sites are already beginning to spring into life but in the fullness of time, they will all bring a suffusion of reds, blues, oranges…every colour of the rainbow in fact for everyone to enjoy.

It is a real and practical response by the city in response to the Climate Emergency and Extinction crisis.

“The city council has been brilliant in making this project happen for a second year and Liverpool really is leading the way in terms of the number of wildflowers being planted this year.

“The idea is to create a network of flowers that radiates out from the city centre and all adds up to something very special.
“It’s also important to know how rare some of the flowers actually are – varieties such as cornflowers are practically extinct in the wild so this is one way of introducing them.

“The aim is also to really cheer people up during these times by bringing nature and colour into the city.”

“The Wildflower Gateways Project has transformed some areas of our city , as well as many residents’ perception of some of our greenspaces. These meadows contribute fantastically to biodiversity, supporting pollinators and other wildlife. And they have brought communities together at some sites to sow and celebrate the flower, in a distanced way this year of course.

I’m proud that so many sites have now been sown across the city and thank the dedicated staff and partners working on this. I’m aware from my own local area that creating a wildflower meadow has led to people valuing the space more, for example, there has been less litter dropped at St Agnes Fields on Ullet Road since the flowers grew last summer.

We look forward to expanding the project, creating more meadows over the next few years.”