The Wirral actor starring one of this year's most groundbreaking LGBT films - The Guide Liverpool
Contact Us Advertise with The Guide Our Video Services Follow us:

Wirral actor Carl Loughlin is about to star on the big screen in a ground-breaking LGBT film, set against the backdrop of a gay rugby club.

Carl plays the bully of the team in In From The Side, with former Emmerdale actor Alexander Lincoln (for fans of the Dales soap, he played Jamie Tate).

And the 40-year-old believes the film, which premieres in September, is going to pave the way for LGBT films in the future.

“A lot of gay films are either about coming out or homophobia or AIDS, and I think those stories needed to be told, but you can only do so many films like that,” he says. “In 2022, I think we’re ready for something else and this film is totally different because it’s a love story that just happens to be set in a gay rugby team.

“I think this is the first film I’ve ever seen where it is set in that world and it’s not really about being gay, it’s not waving a banner.  It’s about a love affair between two people, and about friendship and teamwork, so everyone can relate to it no matter what sexuality you are.”

Carl, who works for Wirral Council alongside his acting, first got involved in the film before Covid when he was actually planning a similar project of his own.

“I was making short films and I wanted to do one about a gay football team,” he explains. “I contacted someone who I knew had great camera skills, Matt Carter. He’s also an amazing writer and editor, and he told me he was thinking about doing a rugby film.

“I was in a gay rugby team myself, the Liverpool Tritons, but I know there are lots of people who want to get involved in sport but feel like they can’t.

“So it was like life imitating art, that was one of the things that really attracted me to the film, and why I was determined to get the part.” 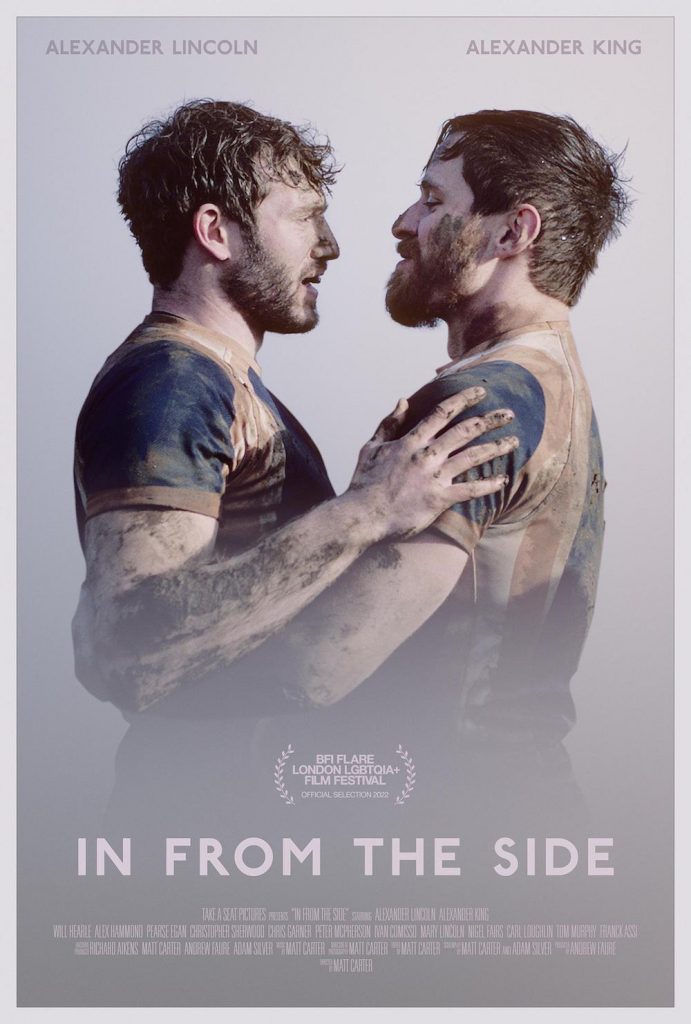 In From The Side was shot over three months in London four years ago, with Carl travelling down to film scenes in between his day job.

He plays Gareth, the bad guy of the story who discovers the affair between his two teammates.

“It took all through the pandemic to edit so that’s why it’s been delayed. I’ve spent the past four years saying to people ‘I’ve done this rugby film, it’s going to be amazing’ so I think they’re sick of me going on about it!

“Now it’s finally going to be released nationally and I can’t wait to see it again. I’ve seen it four times already and every time I cried. I’m not a big crier, but it sucks you in because it’s funny, and I honestly think it’s just a really really good film.”

Audiences will get to judge for themselves when In From The Side is out in cinemas, with a British Film Institute preview in almost 100 cinemas across the country on September 14 and a general release on September 16.

After sold-out screenings at the BFI Flare Film Festival earlier this year, it’s already been bought by a distribution company for American cinemas and is heading to international film festivals, and once it comes off the big screen it’s lined up for a major streaming showcase.

Carl, who started his acting career with the Port Sunlight Players, hopes the film will not just break new ground for the LGBT community, but it will open doors for his own career too.

“My dream role would be on Hollyoaks or Emmerdale,” he says. “I did some extra work at Hollyoaks when I was at uni, so that’s the ideal.”

In the meantime, he’s looking forward to the celebrity premiere in Leicester Square on September 6 and he’ll be keeping his fingers crossed for one name in particular on the guest list.

“Rylan has already given a shout out to say he’s going, and I’m hoping for Emma Bunton because she’s the only Spice Girl I haven’t met. If she goes, that’s my life made!”