This Angel wings NHS painting by mural artist Paul Curtis is being auctioned for Alder Hey - The Guide Liverpool
Contact Us Advertise with The Guide Our Video Services Follow us:

A poignant painting by Liverpool mural artist Paul Curtis depicting the phenomenal work of the NHS during the pandemic is being auctioned to raise money for Alder Hey.

The piece, entitled Strength, Hope and Recovery, shows a nurse kneeling in front of Paul’s best known street artwork – the Liverpool Wings on Jamaica Street in the Baltic Triangle.

Originally commissioned by Liverpool University, it is now part of an exhibition and online auction which aims to raise £100,000 for Alder Hey Children’s Charity 7in10 Mental Health Appeal.

The Brighter Futures event, including a free-to-visit exhibition at the Maritime Museum this weekend, will display over 120 pieces of art. 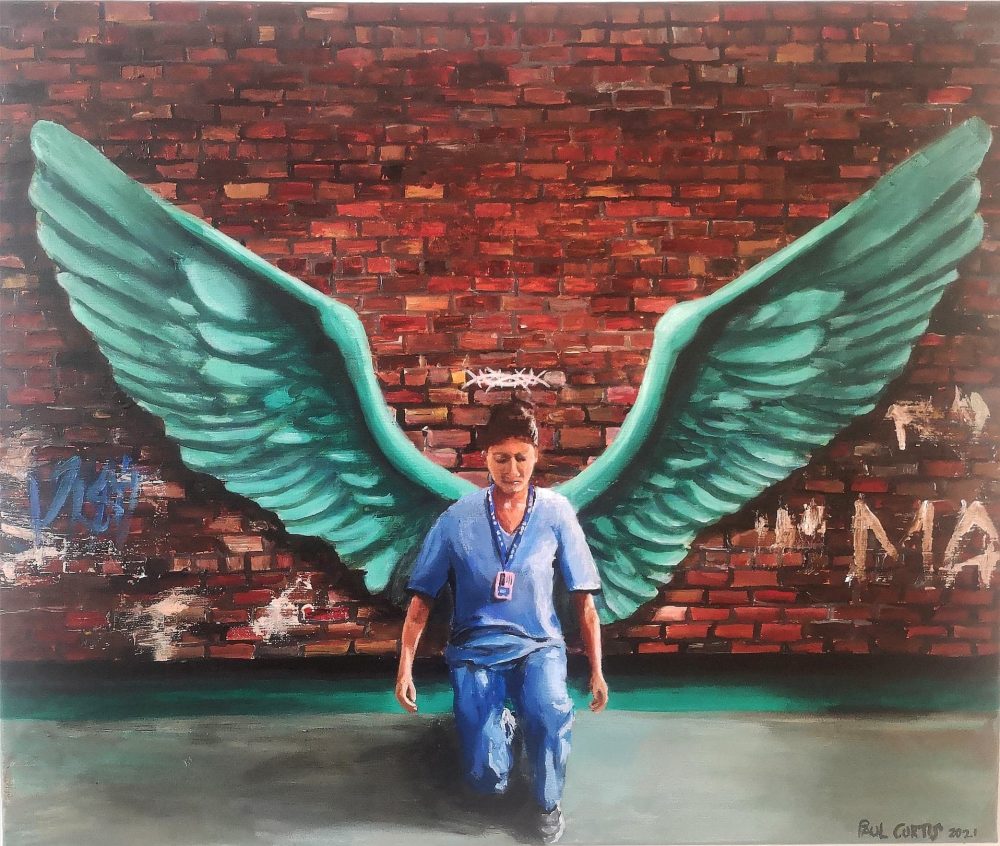 Big names such as Yoko Ono and Willy Russell have donated works which are available to bid on online and Paul says he’s pleased to have his work alongside them supporting such a good cause.

“It’s all about raising as much money as we can for the children, to support mental health services at Alder Hey, so that’s something I’m obviously really happy to be involved in,” he says.

“Alder Hey is always at the cutting edge of children’s health across the board and it’s great that we have somewhere like that on our doorstep.”

Paul did the painting in 2020 when the Covid pandemic was at its peak and NHS staff were under enormous strain, putting their own health and lives at risk in the battle against the virus.

He was asked to create the 20 x 16-inch acrylic on canvas by Liverpool Uni which wanted a striking image for the front of its annual alumni magazine.

“They wanted a cover design for the 2020 edition so they commissioned me to do a painting which summed up the year but with a link to Liverpool,” explains Paul.

“Once it was finished they just used a digital image, which meant I still had the original canvas, so I said, ‘if it’s just going to sit in a cupboard and you haven’t got a plan for it, why don’t you donate it to a charity?’

“They were fine with that suggestion so I asked if we could give it to Alder Hey because there’s an obvious link there with the nurse. 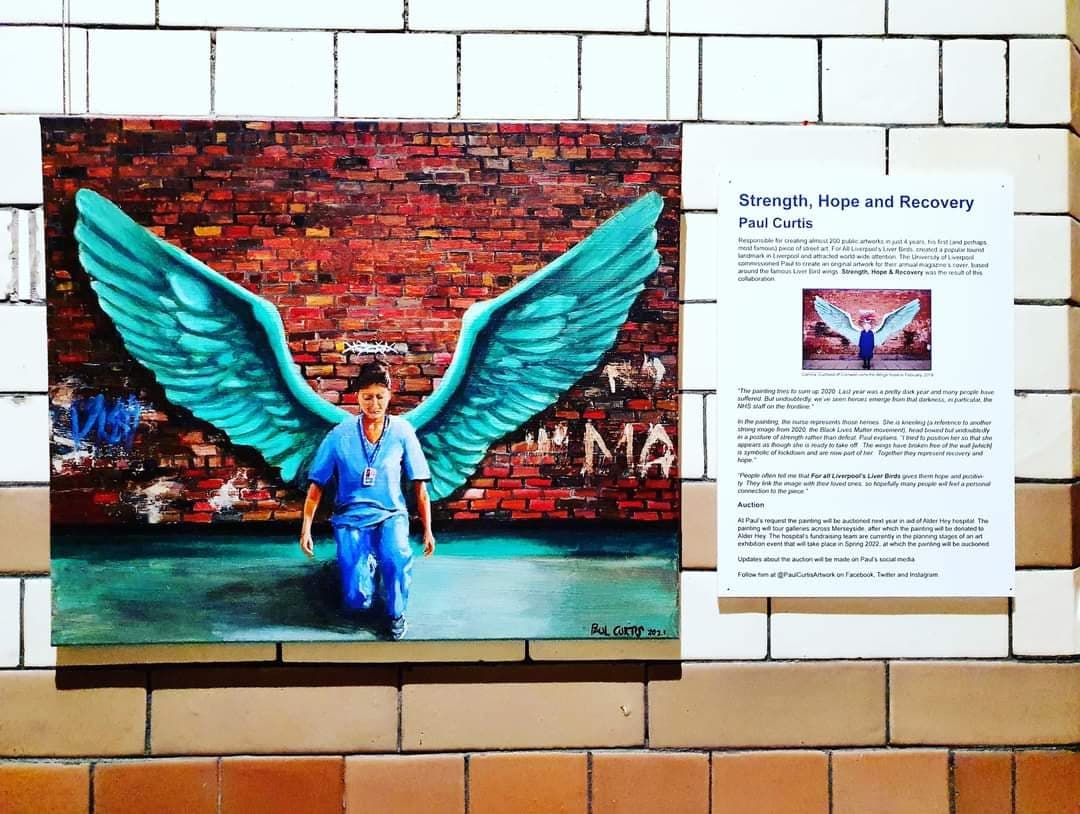 “At the time I didn’t know about this auction, I’d just intended to auction my painting off individually and give them the proceeds, but then they told me they were planning this big event and they wanted to use it as part of that.”

Paul says having his work up for bidding with the likes of Yoko has been a nice surprise.

“I honestly thought it would just be hobbyists donating pieces so I was really surprised when I saw the brochure and all those big names were involved although I suppose it’s to be expected with Alder Hey because it’s such a respected institution in Liverpool and right across the country.”

The auction is a chance for fans of Paul’s street artworks, which have become a landmark across the city, to own a piece for themselves.

Strength, Hope and Recovery was a challenge to paint, he says, not least because the scale is so different to his usual day-to-day work.

“The skills in painting a mural and painting a canvas are totally different – I actually find canvases harder because of the precision needed. For example, if I was painting somebody’s face and it was 20ft x 20ft, if you’re a few centimetres out with a brushstroke then nobody’s really going to notice but if you’re doing it on a much smaller scale then you haven’t got that space to work with. Each fine line has to be precise.” 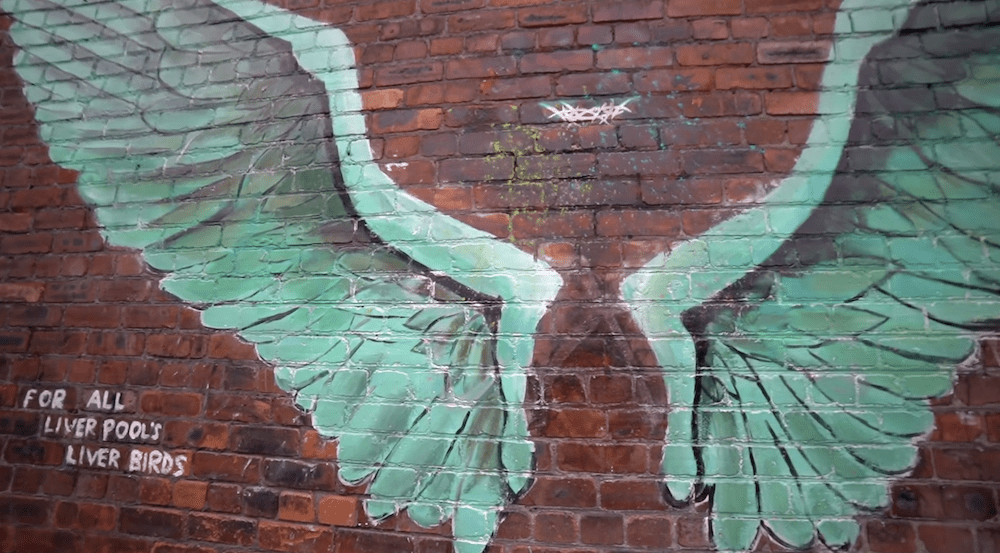 Paul will be among the artists getting together at the Maritime Museum on Friday for the launch of the Brighter Futures event. The online auction is open until the end of the exhibition on Sunday evening.

All proceeds will go towards Alder Hey’s 7in10 mental health appeal, which aims to raise £3m to transform the way mental health services are delivered to children and young people. The Appeal will also help fund a new 12-bed inpatient mental health unit, Sunflower House – currently set to be completed in April 2022 – which will be part of a new Mental Health Campus at Alder Hey.

To view auction items, including the angel wings, and register to bid, click here.