This group of volunteers have restored the Great Homer Street buoy in memory of the city’s Merchant Navy seamen - The Guide Liverpool
Contact Us Advertise with The Guide Our Video Services Follow us:

One of Liverpool’s best-known landmarks has been restored to its former glory.

The buoy on the junction of Great Homer Street and Scotland Road has been cleaned and repainted in tribute to former Merchant Navy Association chairman Bill Anderson, who died from Covid last year, and in memory of the city’s Merchant Navy seamen, past and present.

“Primarily we wanted to remember Bill and the work was done in homage to him,” says Jeff Rawlinson, a former chief petty officer. “But it’s also in memory of the men, the fathers, grandfathers and great grandfathers, in the city who served.

“The buoy has great historical significance to Liverpool, and so many people who come into and who leave the city driver past it. It deserved some TLC.” 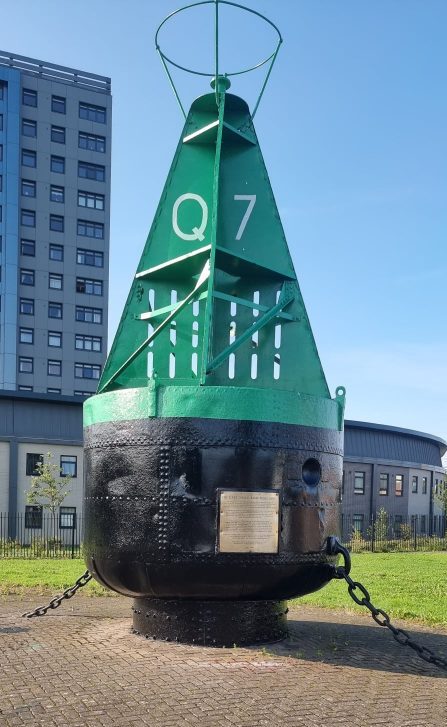 Jeff, 66, who lives near to the buoy, was one of four people who volunteered to restore it on behalf of the Liverpool Merchant Navy Association. Mersey pilot Kevin Walsh, MNA current chairman Alfie Hincks and Lee Patten, a chief officer for Svitzer Tug Company joined him.

Mersey Docks and Harbour Company maintains buoys in the river, and they mark the position of the deep-water channels used by ships entering the docks and local shipping hazards. Each buoy has number which appears on both it and charts of the river.

Commissioned in 1950, the one on Great Homer Street was stationed in a variety of locations, from Garston Docks to the entrance of the Mersey. It has marked hazards including the dismantled WWII gunnery platform Fort Maunsell and Pluckington Bank, south of the Pier Head, when it was called Duke’s Buoy.

Bearing the number of its last station, Q7, it sank and was lost off the coast of Formby before being rediscovered when a new buoy was being stationed. Q7 was raised and salvaged in 1979 and placed in its current position in June 1981.

Jeff, who is disabled following an industrial accident in Australia where he worked as a rigger, says: “It was a labour of love for us all.

“The buoy was in a real state. It was dirty and rusted – and the plaque which tells its history had been covered with anti-vandal paint. It was a disgrace.

“This buoy has such historical significance to the city, and it is something seen by thousands of people who drive or walk past each year. It’s a real landmark and a meeting place for people, including football supporters!

“Before Bill Anderson died, we had meetings about the lack of recognition to those who served in the Merchant Navy in the city, and so it seemed fitting that this should be restored in memory of a man who was a leading figure in the seafaring world, and a former National Union of Seaman and ITF Seafarers Trust official. 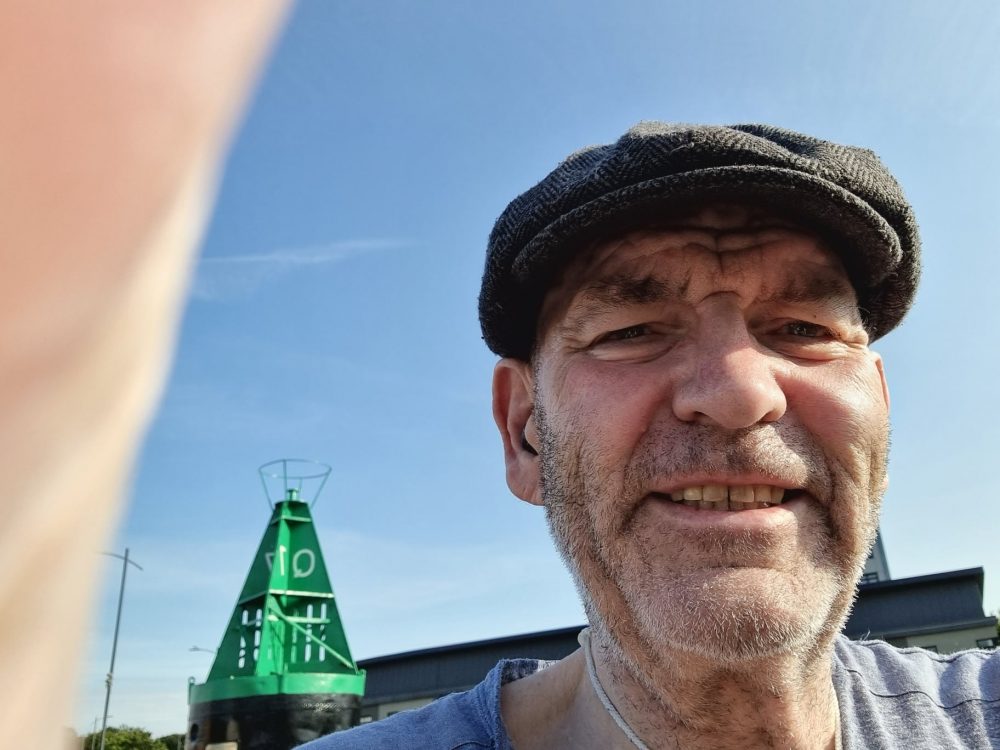 “We hope eventually to place a bench by it with a plaque bearing his name.”

It took three days to clean up the buoy, removing years of rust and dirt, and three days to paint it in its original colours using 25 litres of special polyurethane marine paint which had been donated.

“It was hard work,” says Jeff, who did ‘most of the donkey work’ leaving much of the painting and climbing to the others because of his injuries after a fall when a building collapsed on him. “I lost of the use of my left arm after breaking it in eight places. I fractured my hip, my skull, and more – I was a mess and I have suffered from depression. So this was a real release for me, and an outlet.

“Kevin and Lee, who both still work, had to fit it in around their working day. It took great effort.

“But it was worth it, and the response has been fantastic. I’ve been overwhelmed by the comments from people who say how great it looks.

“Eventually we’d like to erect signposts with the points of the compass.

“Seeing it now looking as it should, gives me a great sense of pride, not just because of what we’ve done but because it is the perfect memorial to Bill, and to the many Merchant Navy seamen, especially those who lost their lives, who came from that area.”

He added that it would also be a tribute to another seaman, Tony Santamera – better known as “Starry” and a former national secretary of the NUS – who, along with Bill Anderson was ‘a great fighter for all in the Merchant Navy’, and was born and bred not far from the buoy.

Alfie Hincks, who is also councillor for Everton, added:

“It has been great to revitalise the buoy and bring it back up to standard.

“It stands proudly in the gateway to our city and is a reminder of our history, and what it meant to us.

“Eventually, we would like to create a small Maritime Heritage Quarter there in memory of those who lost their lives serving for the Merchant Navy.”