Watch as Pete Price meets the cast of Masquerade at Royal Court Liverpool - The Guide Liverpool
Contact Us Advertise with The Guide Our Video Services Follow us: 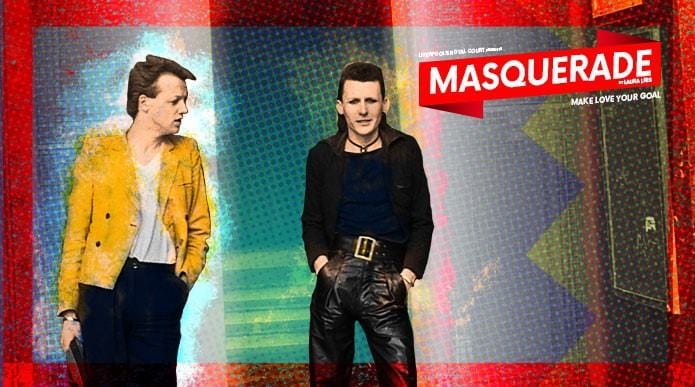 This summer’s big show at Liverpool’s Royal Court Studio starts next week and it will take you right back to the 80’s.

Masquerade is the story of two lads in 1980s’ Liverpool who are finding out who they really are. Set in one of Liverpool’s most famous gay clubs it is a beautiful story about one man’s search for a place to be accepted.

The Court didn’t have to look far for this play as it was written by Laura Lees who works in the Box Office there. Based on the experiences of her uncle, the script was developed through the theatre’s programme to promote new writing – Stage Write.

Royal Court regulars Roy Brandon and Eithne Browne are joined by Julie Glover, Adam McCoy, Jamie Peacock and Daniel Waterhouse in a strong cast. The play is directed by Paul Goetzee and designed by Christine Hatton.

Mike loves Tony (but not like that). He’s his best mate. To be confident, outgoing and not afraid of showing people who you really are is a big deal in 1986 in Liverpool.

When they discover The Masquerade, Mike gets a taste of the life he could be living.  He is welcomed in with open arms, soon becoming the resident DJ in a club that is the centre of his universe.

Outside of those walls he needs to find the courage to tell his parents that he is not the son that they want him to be. Will he find the strength to stand up for himself when tragedy strikes?

The Masquerade bar is now on Cumberland Street and the owners have thrown their support behind the show. They are offering ticketholders a free drink either before or after the play if they show that night’s ticket at the bar. Liverpool Pride are also supporting the play by including it in their programme this year.

Masquerade runs from Wednesday 24 July to Saturday 10 August in the Studio space at Liverpool’s Royal Court. Tickets and information are available from www.liverpoolsroyalcourt.com or on 0151 709 4321