WATCH: Liverpool turns into a sea of red for the LFC Victory Parade - The Guide Liverpool
Contact Us Advertise with The Guide Our Video Services Follow us:

WATCH: Liverpool turns into a sea of red for the LFC Victory Parade

Liverpool might not have got the result they wanted in the Champions League Final in Paris last night – but they did get the homecoming they have earned.

And the city, as predicted it would be, was painted the brightest red when the LFC team arrived back to celebrate a fantastic year and the double, after winning both the Carabao Cup and the FA Cup. 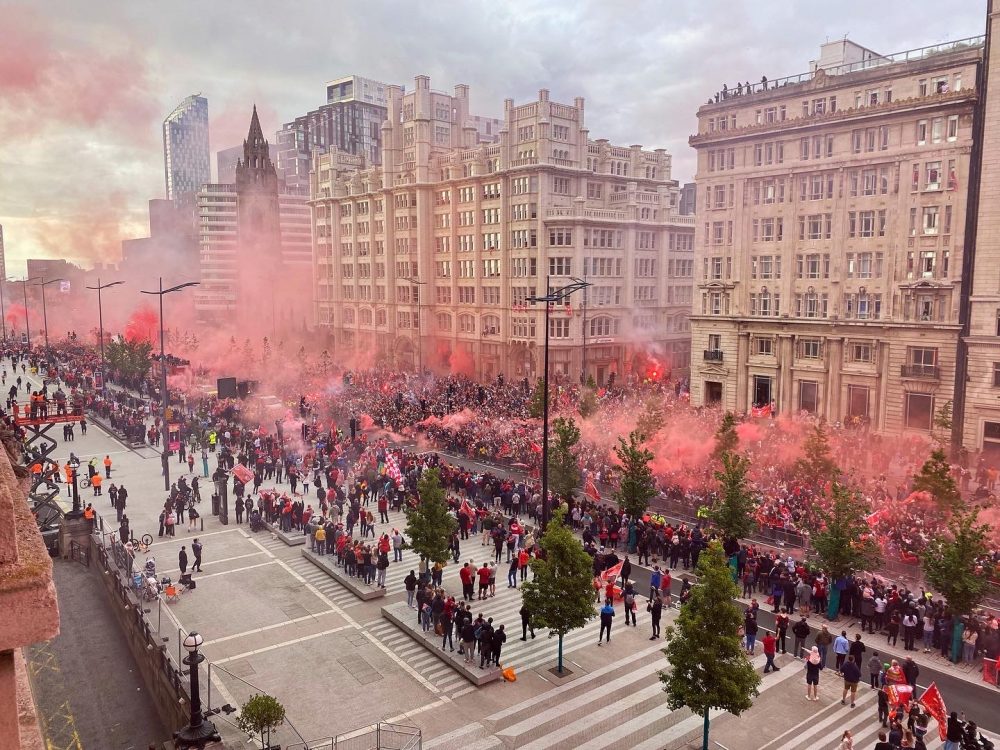 Despite being pipped to the Premier League by Manchester City and narrowly losing out in the Champions League Final to Madrid – in a game overshadowed by events outside the stadium – Liverpool fans once again demonstrated remarkable support for their team.

There were tears, there were cheers – and there were plenty of beers! – as hundreds of thousands of fans filled the streets to welcome home Manager of the Year Jurgen Klopp and his smiling players… along with a rogue team member in the for of Calvin Harris!

From early doors on Sunday, supporters lined the eight-mile route of the LFC Victory Parade which started at Allerton Maze  at 4pm, before travelling north along Queens Drive, Mill Bank, West Derby Road, Islington, Leeds Street and the Strand, and ending up at Blundell Street.

And the atmosphere was phenomenal.

As the open top buses went slowly by, fans – 20-and-more deep – applauded the Reds team, and the silverware they carried high, as they waved and signalled to an appreciative and ecstatic crowd.

Liverpool what a city!
What a show 😍
Well done @LFC & @LiverpoolFCW 👏

There were flags flying in the air, along with scarves and banners – ‘we’ve booked the hotel for 2023!’ – and there were balloons, horns, whistles, and flares which, along with an explosion of ticker-tape, turned the air red.

The turnout made for spectacular scenes throughout the city as fans lined the entire 13-kilometre parade route from Allerton Maze to The Strand. 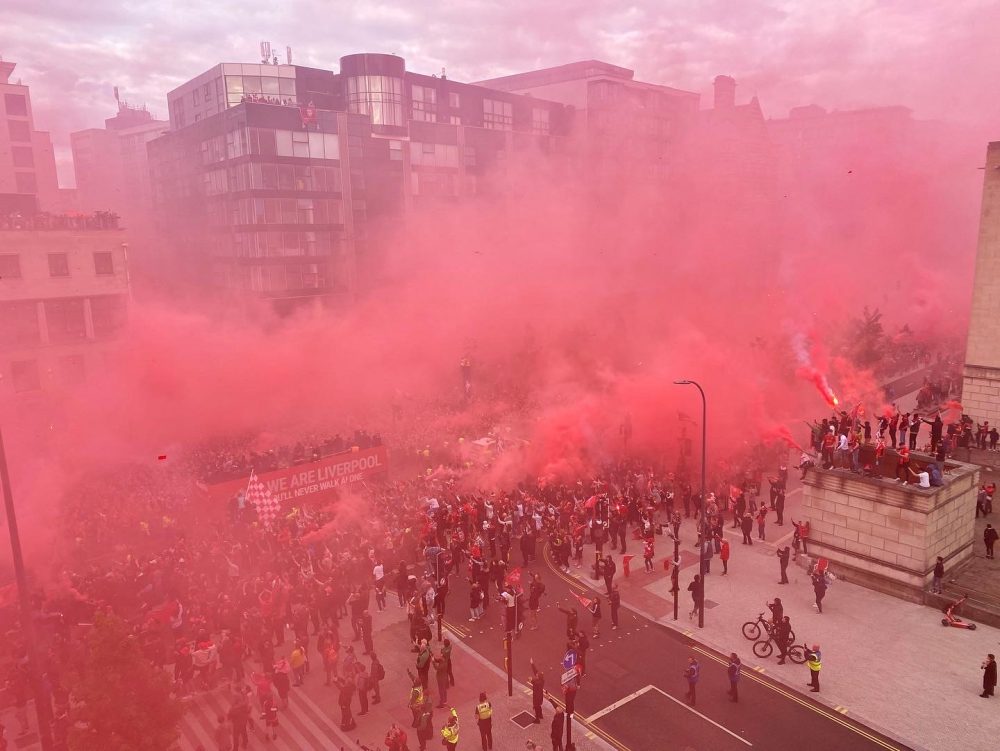 From Childwall Fiveways roundabout, The Jolly Miller, Islington and then the big finale on The Strand, fans lined the streets to get a glimpse of their heroes and show their appreciation for an outstanding football team.

There were frequent bursts of Allez, Allez, Allez, and You’ll Never Walk Alone, which stopped only when supporters joined in the thumping songs being played from the bus, tunes like Clavin Harris and Dua Lipa’s ‘One Kiss’.

There were huge smiles from all the players, and even wider ones from the fans because, while it might not have been quite the victory parade that was wanted, they were no less happy to see them. They’d have loved to have been celebrating a Champions League victory too, but they made it absolutely clear, Liverpool are still their heroes. 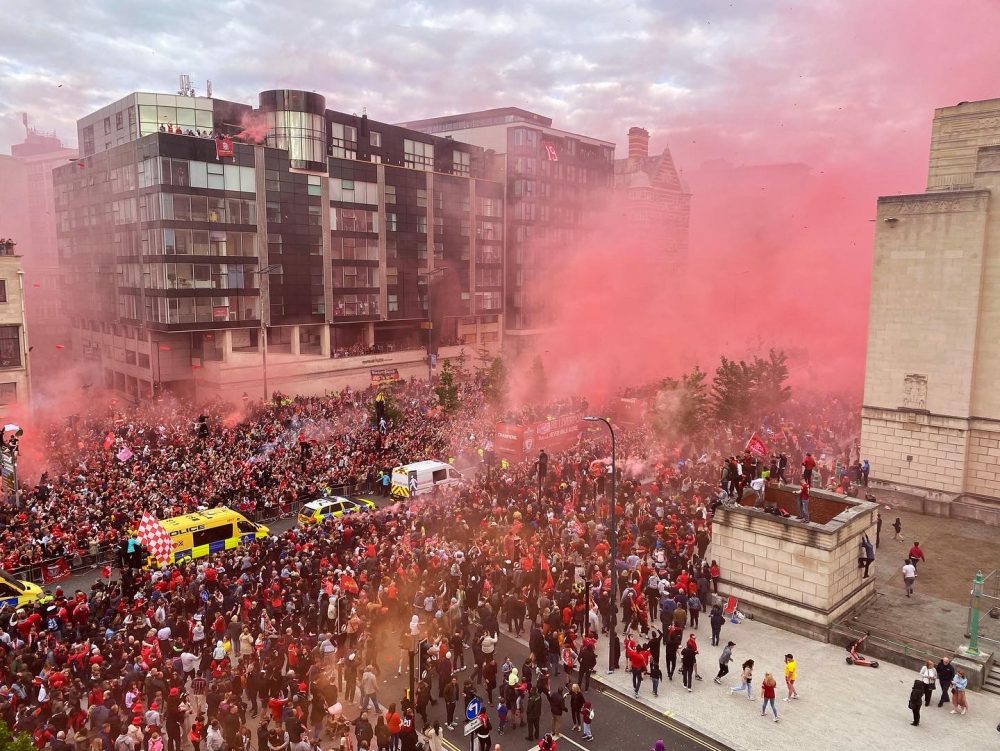 The parade finished with stunning displays of pyrotechnics, flares and confetti coming from the Radio City tower, Cathedral, Cunard Building and other iconic city locations.

People were in good spirits all along the route and in the bars, pubs, restaurants and public spaces – making for an afternoon that will live long in the memory. Liverpool Football Club and the city of Liverpool itself, have done us all proud once again.

We want to say a huge congratulations to everyone at LFC, Liverpool City Council, all the stewards, clean up teams and volunteers who have worked incredibly hard to show our city in the best possible way. United in celebration.