WATCH: The Dixie Dean Hotel is now open seven days a week continuing to celebrate the legacy of the Everton legend - The Guide Liverpool
Contact Us Advertise with The Guide Our Video Services Follow us:

WATCH: The Dixie Dean Hotel is now open seven days a week continuing to celebrate the legacy of the Everton legend

The Dixie Dean Hotel is based on Victoria Street and now open seven days a week offering the perfect place to stay in the city.

The Blues record-breaking goalscorer Dixie Dean is legendary to Evertonians and to football fans around the world.

Now the city centre hotel named after him is helping to share his legacy, applying the same high standards as the great man himself.

“He always wanted to be the best and he achieved that in his career with records that will never be beaten, so we want this hotel to be the best in his name,” says guest relations director Melanie Prentice, Dixie’s granddaughter. The 44-room Dixie Dean Hotel, on Victoria Street, opened its restaurant and bar in 2019, and its first rooms just four weeks before the first lockdown.

Under new management since March 1 this year and reopen again seven days a week, it’s welcoming not just football supporters paying homage to a Blue idol but all guests in search of a unique stay in a beautifully restored building.

“From Sunday to Thursday we see couples, families, and small groups celebrating birthdays or a special occasion,” says Melanie, “then on Friday and Saturday the whole of the city centre is about going out, whether it’s to the theatre, to the football, or the restaurants and bars. 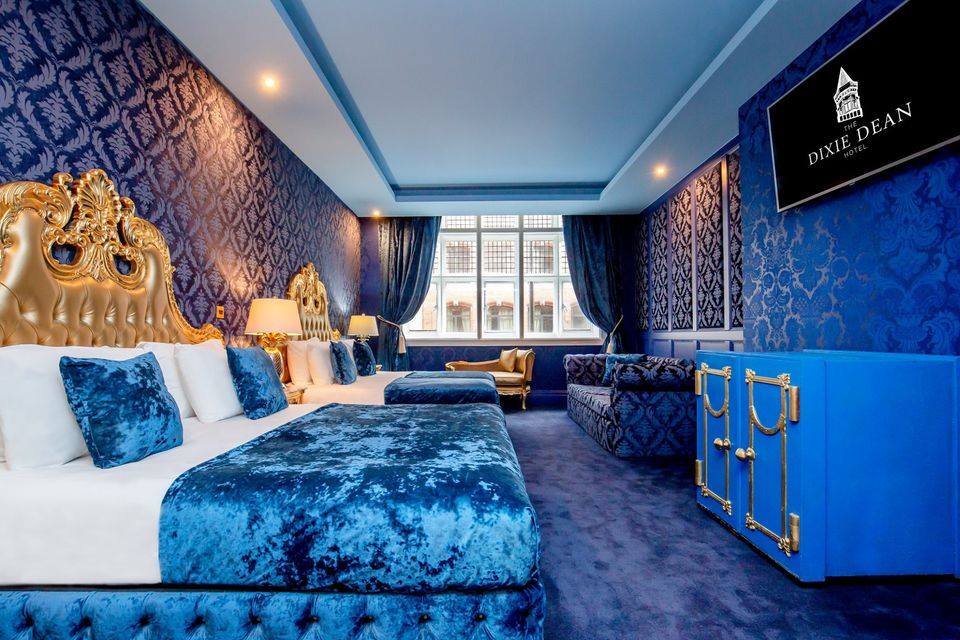 One of the stunning rooms available at the Dixie Dean Hotel

“Obviously we’re a football destination because the hotel celebrates Dixie’s career, and we do get a lot of sports people and fans staying with us, but the theatres are only a short walk away, and we have really easy access to Lime Street which people love too.”

To keep the theming quite subtle, memorabilia is mostly in the reception area where three life-size statues of Everton legends – Dixie, Howard Kendall and Alan Ball – are a must-do photo opportunity.

There are screens as guests check in and out, showing photographs, archive documentary footage and newspaper cuttings highlighting his amazing life on and off the pitch. And Melanie and her family have loaned precious personal photos and items never seen publicly before, including Dixie’s gold and diamond signet ring, to a regularly-changing display.

Bedrooms are more team neutral – some are blue, others are gold and there are even three which are decorated in red, although that’s not inspired by the rivals across Stanley Park. “It’s actually a nod to his days playing for Sligo Rovers whose nickname is the Bit O’Reds,” explains Melanie. The hotel’s No.9 restaurant, named after Dixie’s famous shirt number, is currently serving breakfasts, with lunch, dinner and afternoon tea menus due to return this month. There’ll also be specially created cocktails in the bar, dedicated to milestones like his record-breaking 60 goals in just 39 games in the 1927-28 season.

Melanie says she’s proud to share her grandad’s exceptional legacy and give guests a stay to remember.

“I often sit with them and chat about him – I want people to arrive as guests and leave as friends. “My grandad was very unassuming, he would never have expected to have a hotel named after him, or for people to even still talk about what he did, but he deserves to be remembered.”

Find out more about the Dixie Dean Hotel and book your stay HERE.