WATCH: We got a message from Jürgen Klopp after our coverage of LFC's Champions League Final win - The Guide Liverpool
Contact Us Advertise with The Guide Our Video Services Follow us:

WATCH: We got a message from Jürgen Klopp after our coverage of LFC’s Champions League Final win 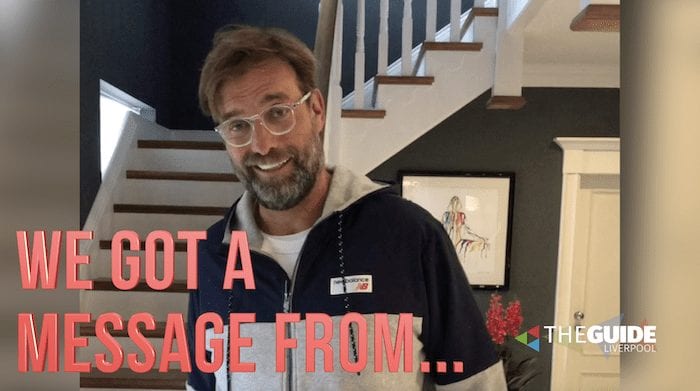 Home › Culture › WATCH: We got a message from Jürgen Klopp after our coverage of LFC’s Champions League Final win

We are buzzing at Guide Liverpool HQ today as we received a video message from LFC Manager, Jürgen Klopp thanking us for our coverage of the teams incredible win in the Champions League Final.

It comes on the same day that LFC has announced that you can see the Champions League Cup in all its glory at the Kop Bar at the stadium everyday Monday 10 June – Sunday 16 June. More info here.

The road to Madrid began with a mass surge for flights, trains, ferry crossings and in some cases, visa applications as fans flocked to secure any mode of transport and accommodation for the Champions League Final 2019.

The all-English final had the city on tenterhooks a good fortnight before the match.

As the day drew near, send off parties, good luck messages and the ceremonial hanging of banners across every conceivable house, bar and car window began. Joining the majority of reds soaking up the Spanish rays in Madrid Liverpool City Centre became one huge viewing party.

Our cameras and social media captured the pre-match build up from around the city as thousands flooded the streets, bars and venues. Gathering around even the tiniest of screens, an early penalty from the one and only Mo Salah put Spurs on the back-foot and saw the city to erupt in celebration.

Thousands descended on Liverpool to support, and to celebrate as @LFC became the #ChampionsOfEurope again.
Watch our highlights from one incredible day in our city and we will see you for the parade #6TIMES #ChampionsLeageFinal2019 #LFC #YNWA https://t.co/U5i1eyT1m7 pic.twitter.com/vZO8dTiqlL

From Concert Square to Mathew Street to the M&S Bank Arena to Aintree Racecourse and everywhere in between, they say the shouts and cheers could be heard across the Mersey.

It took a late second half goal from Divock Origi to seal the deal and across Liverpool, ‘You’ll Never Walk Alone’ rang out long and loud. 14 years since the last Champions League silverware was brought to Anfield, it was coming home again. The first Champion’s League win for LFC Manager Jurgen Klopp has meant more than ever before. He deserved it.

No one was prepared for the scene of absolute joy and emotion as Jordan Henderson hugged his dad after winning the Champions League Final. Not least the thousands upon thousands of fans who cried their own tears at the victory, one said: “This is the greatest night of my life, short of my kids being born. If you can’t be in Madrid then there’s nowhere else on Earth to be tonight than in Liverpool.”

Job done ❤️ Victory belongs to those who believe in it the most, and believe in the longest. #LFC @aintreeraces #UCLFinal19 #Liverpool pic.twitter.com/5DCl7HNyIJ

Waking up on Sunday felt like a trip to wonderland for many LFC fans. Having caught a few hours of sleep (or not in some cases) it was time to welcome the team home.

The LFC Victory Parade drew three quarters of a million people on to the city streets from early doors on Sunday 2nd June. The 14 mile long root turned Liverpool in to the red sea as fans, families, flags and flares lined the roads and roundabouts from Allerton to West Derby, Tuebrook to town. The scenes on The Strand were like nothing we’ve ever seen before. Even Mrs Klopp positioned herself on top of a bin to wave at her triumphant hubby and his team as the open top bus passed by.

#Liverpool this was you yesterday.

Along the parade root we spoke to fans who had moved heaven and earth to get home in time to see the team show off their win. Recalling the moment Jordan Henderson rallied the team and lifted the cup, many held back tears of pride and exhaustion.

Mayor of Liverpool Joe Anderson took to twitter to reveal the impact of the victory had on the city. He said: “From start of parade at Mather Avenue to the end at Brunswick St approx 750,000 people cheered LFC, winners of the Champions League. Thank you to all my team at LCC in particular Sue Lee and her events team our St Cleansing teams, Police and everyone who made it happen.”

We cant recount a monumental weekend in the city and not give the utmost respect to the Street Teams, hospitality staff and volunteers who worked their fingers to the bone cleaning up after the game and celebrations on Sunday. Certain parts of the city were so littered you could barely see the ground, however, it was business as usual come Monday as we, wearily returned to work.

To each and everyone one of you, thank you. Your effort did not go unnoticed not unappreciated. You’re an integral part of what makes this city so damn beautiful and what keeps visitors from near and far, coming back.

Head this way to re-live all our Champions League Final coverage and send us your stories, pictures and videos from Madrid, town, the victory parade and everywhere in between on Twitter, Facebook or Instagram and we’ll share the best on our socials.