We meet Joey the horse from War Horse at Liverpool Empire - The Guide Liverpool
Contact Us Advertise with The Guide Our Video Services Follow us:

We meet Joey the horse from War Horse at Liverpool Empire 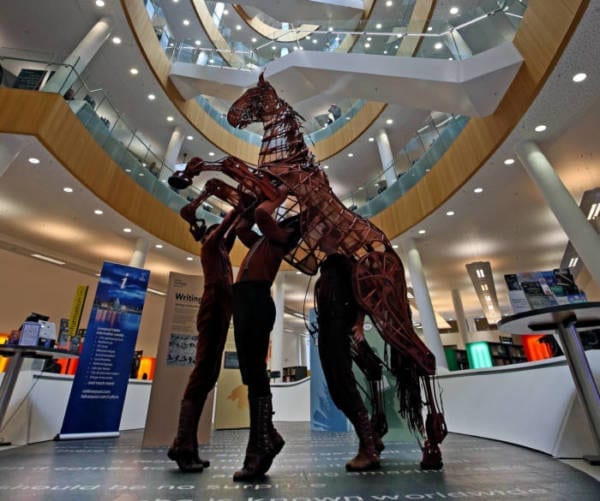 War Horse has returned to Liverpool Empire and we can’t rate it enough. Watch above as our Rach meets the puppeteers behind the incredible life size horse, Joey.

This week, Joey the life-sized horse puppet from National Theatre’s acclaimed production of War Horse arrived in Liverpool for a two week run at Liverpool Empire, finishing on 17 August.

Book your tickets for War Horse at Liverpool Empire here

It is certainly one of the most beautiful and captivating show we have ever seen in our city, bringing the film and the novel to life on stage, like you have never seen before.

Could be the best show I’ve seen @LiverpoolEmpire Might have even shed a tiny, little tear. @WarHorseOnStage – MUST SEE! It’s on until 17 August. Jay pic.twitter.com/0jQHubp7yu

War Horse tells the story of young Albert and his beloved horse, Joey. It’s the outbreak of World War One and Joey is sold to the Cavalry and shipped to France. He’s soon caught up in enemy fire, and fate takes him on an extraordinary journey, serving on both sides before finding himself alone in no man’s land. Albert, who remained on his parents’ Devon farm, cannot forget Joey. Though still not old enough to enlist he embarks on a treacherous mission to find him and bring him home.

Pupils get to meet Joey

Joey also made an appearance at Liverpool Central Library last week to say hello to fans from schools across the city before heading out in the afternoon to visit some of the city’s most iconic sights.

Pupils from St Nicholas, St Vincent De Paul, Pleasant Street and Ranworth Square Primary Schools were let in on some behind-the-scenes secrets from Resident Puppetry Director, Gareth Aled before Joey trotted in to the library’s Discover room to meet them all. 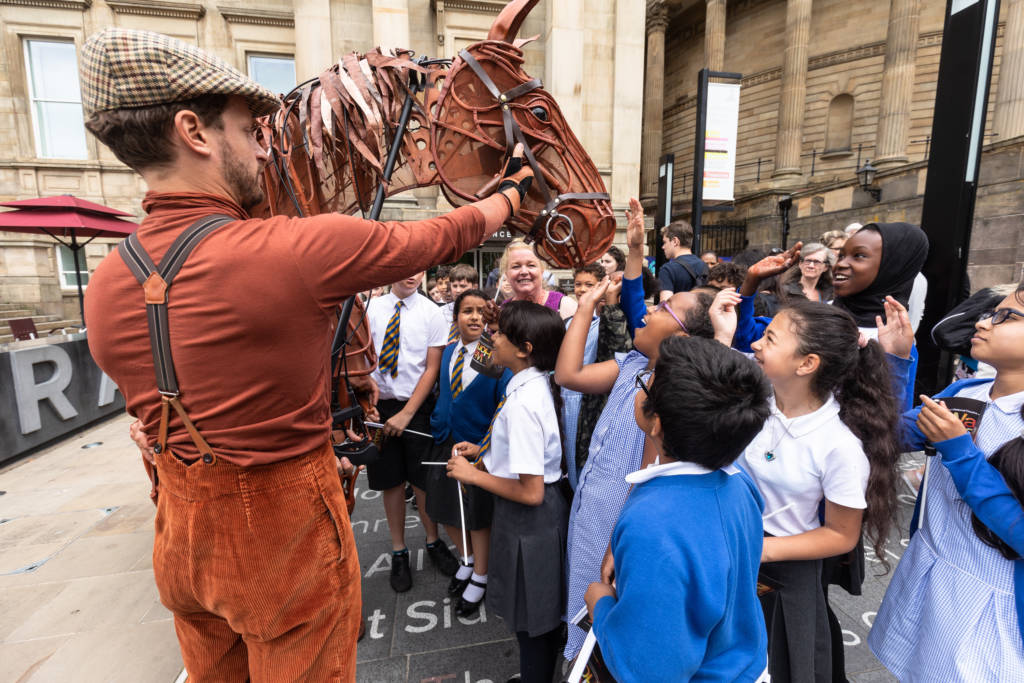 On his travels, Joey even lent a hand to some friends from Merseyside Police’s Mounted Section and joined them on patrol in St George’s Quarter. Police Horses Silver and Jake welcomed Joey and posed happily for photographs to celebrate the show’s return to the city and to raise awareness for the Stand Tall Foundation, which raises money to support the fantastic work of the Mounted Section. 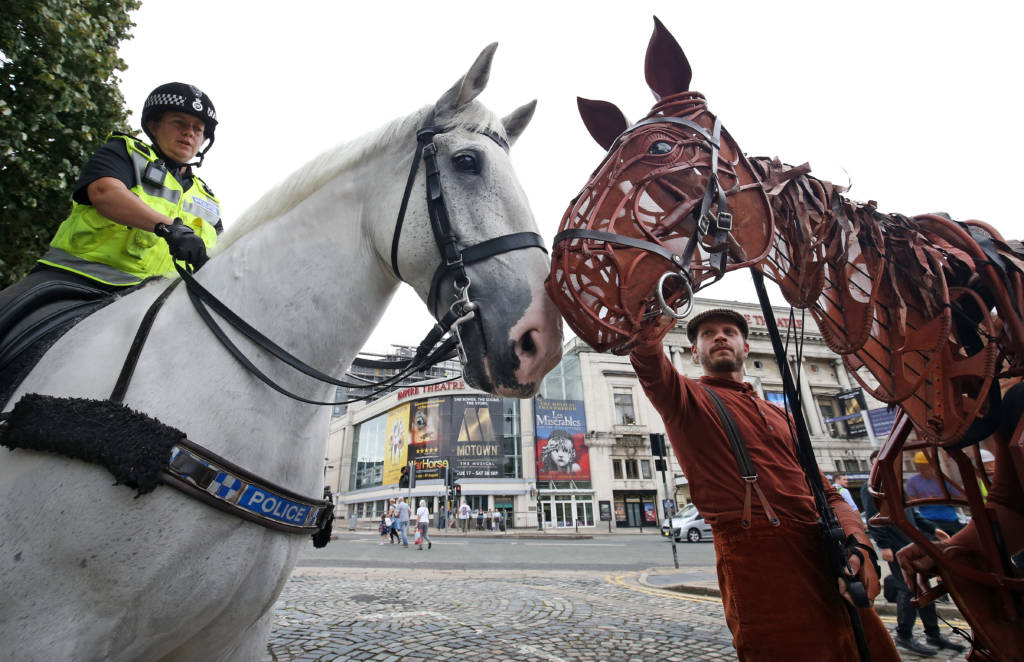 War Horse, the unforgettable theatrical event based on his beloved novel last played at the Liverpool Empire in November 2017 to record number of audiences. 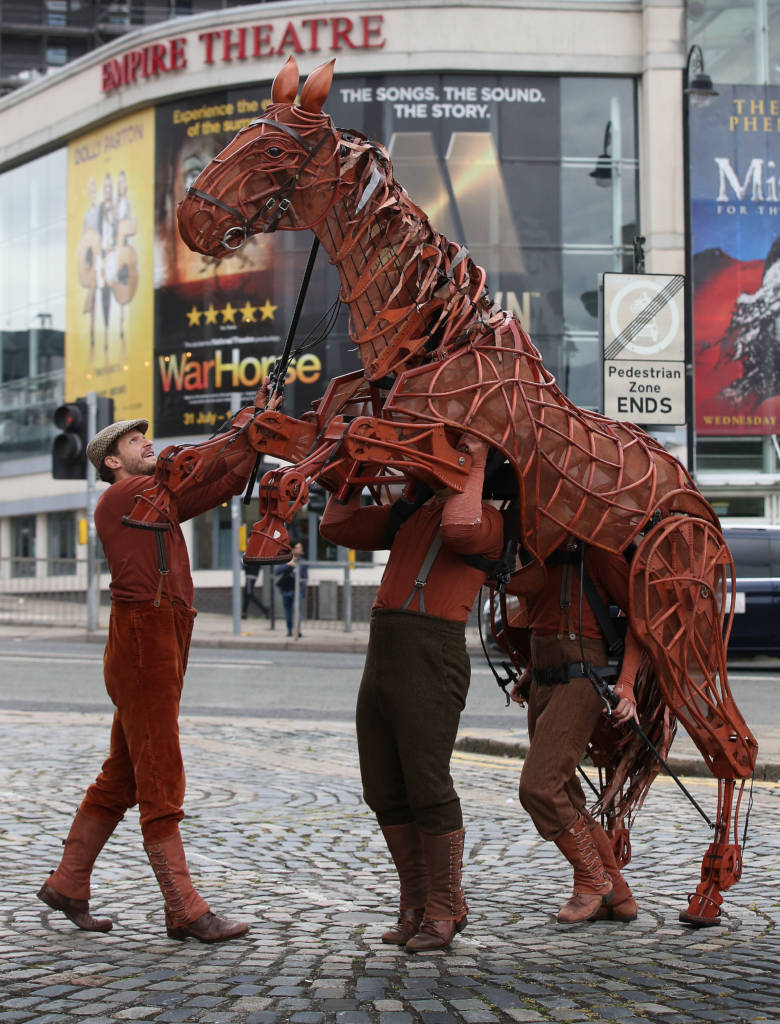 Directed by Marianne Elliott and Tom Morris, Nick Stafford’s adaptation of Michael Morpurgo’s remarkable story of courage, loyalty and friendship, about a young boy called Albert and his horse Joey, set against the backdrop of the First World War is the most successful play in the National Theatre’s history. It features ground-breaking puppetry work by South Africa’s Handspring Puppet Company, which brings breathing, galloping horses to life on stage.