We speak to Jordan Henderson's dad about how the LFC captain is helping him raise £85,000 for the NHS team which saved his life - The Guide Liverpool
Contact Us Advertise with The Guide Our Video Services Follow us:

We speak to Jordan Henderson’s dad about how the LFC captain is helping him raise £85,000 for the NHS team which saved his life

Watching his son, Jordan Henderson, lifting the Champions League Trophy for Liverpool or walk out onto the pitch for the first time for England are incredible moments which have made him burst with pride.

But it was meeting Jordan’s first daughter, Elexa, which was one of the most memorable for Brian Henderson, and which gave him the strongest will to live following his diagnosis with cancer.

After a 13-hour operation to remove tumours from his tongue and throat, the 66-year-old retired policeman was lying in a hospital bed, and he says: “I remember Jordan’s first daughter had just been born. 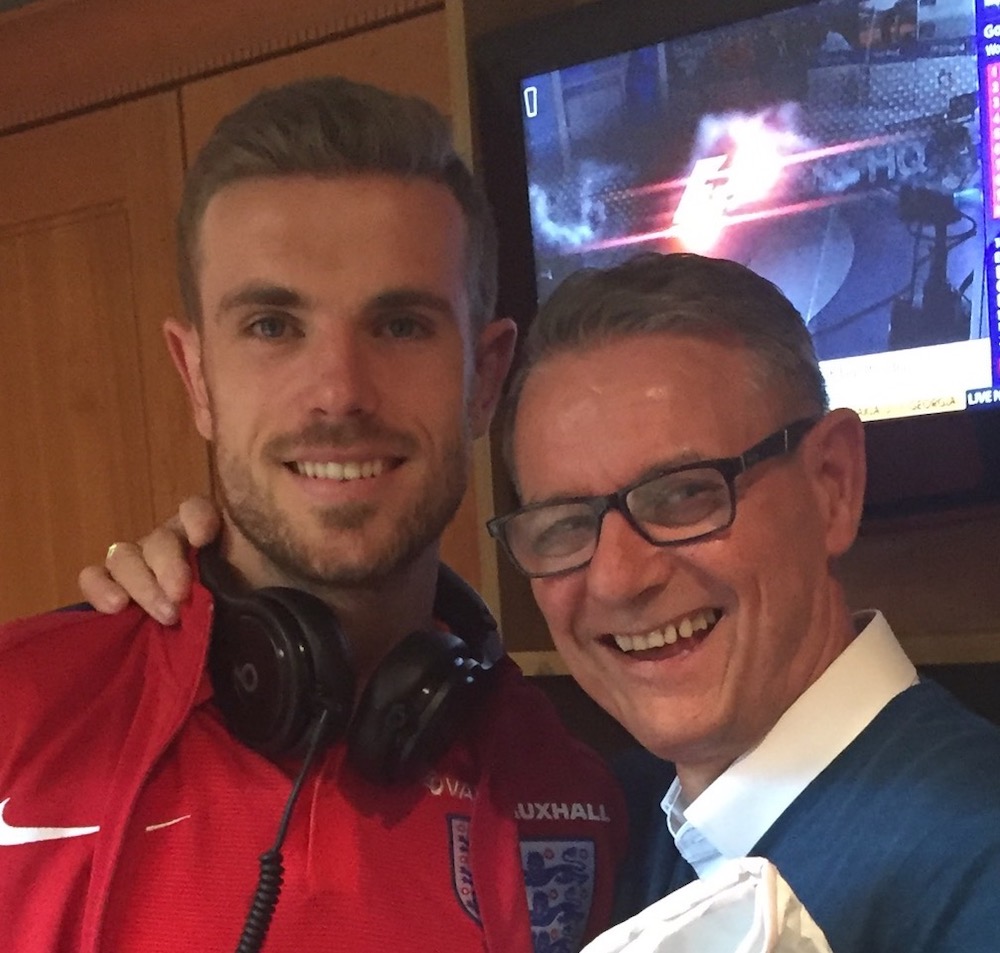 “She was only little, she was a tiny baby, and there’s a photograph of her lying on my chest. I think that was the moment when I thought, it’s not my time to go.

“That was the moment when I realised I had a lot to live for.”

Now seven years on and a grandfather to five – Jordan has three children and his wife Donna’s son has two – Brian has launched an appeal to help repay the NHS team which saved his life.

He is hoping to raise £85,000 to buy state-of-art equipment for his local South Tyneside and Sunderland NHS Foundation Trust because, he says: “I know 100% that I wouldn’t be here if it wasn’t for them.”

The high-end Spectar EndoFlex endoscopy system will help the Ear, Nose and Throat team record footage during assessments which can be reviewed frame by frame to check for abnormalities.

It will help diagnose cancer, and enable consultants to more clearly evaluate a patient’s voice, tongue and swallow function, to provide better outcomes and quality of life.

Brian, who still goes for regular checks, was at the hospital only five weeks ago, when he made the decision to raise the money, with the help of his family and, especially, Donna who cared for him throughout his ordeal. 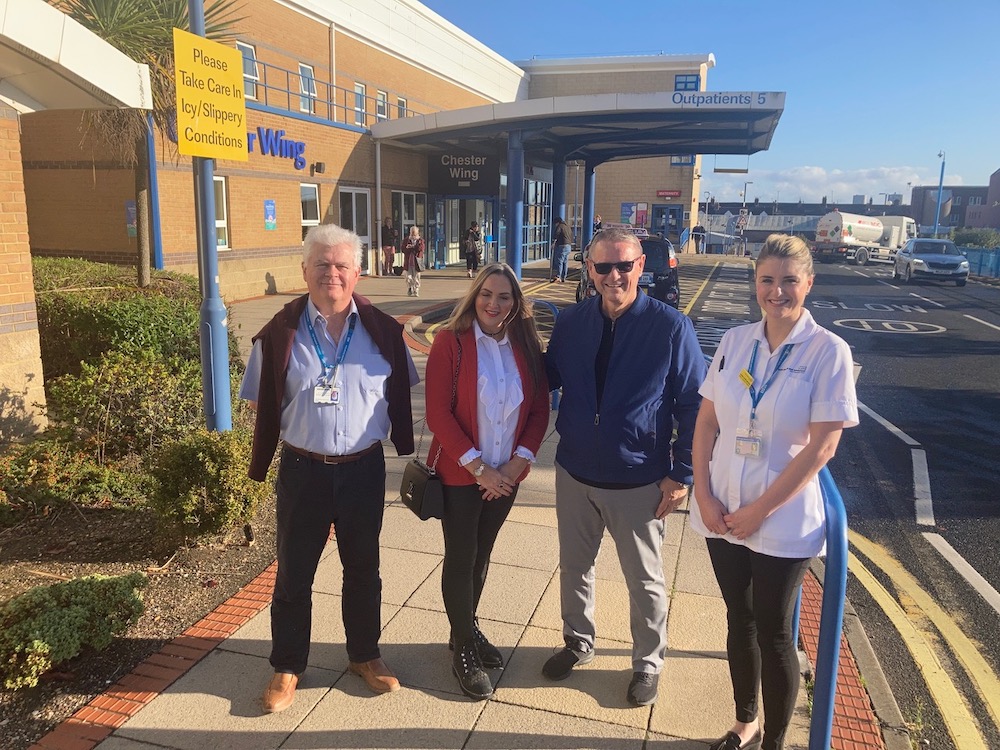 He says: “I saw the consultant Mr Frank Stafford and while we were talking I said, ‘I don’t know what I’d do without you, I wish there was something I could do’.

“I’ve done previous dinners with him to raise money and donated stuff Jordan had signed, but I asked him ‘what do you need’?

“He told me about this machine, I asked how much it would cost and he said £85,000; so I said I’d see what I could do.  It will make a massive difference to patients like me.”

It was at the end of 2013 that Brian was diagnosed with cancer. Always susceptible to cysts, he had arranged to have one removed from his back – ‘Donna told me she wouldn’t go on holiday with me the following year unless I got it removed,’ he smiles – but then he noticed another lump in his neck. 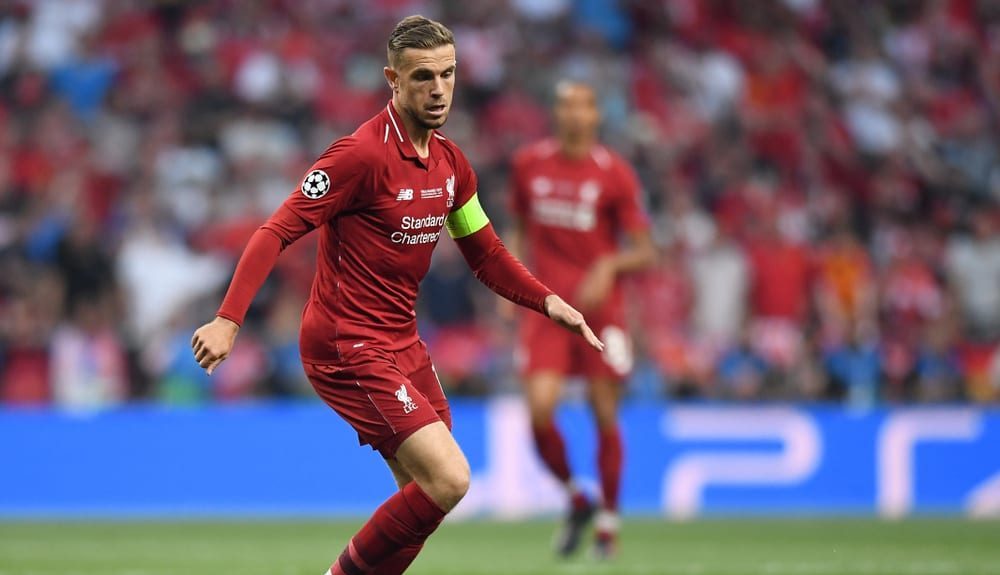 Jordan on the pitch

His GP referred him to ENT at Sunderland and, although Brian didn’t think anything of it, a camera investigation revealed cancer of the tongue which had spread to his lymph glands: “He said there was no easy way to tell me. My first thought was how I would tell the family, especially my mam, who we’ve since lost, because she was 87 and in ill health herself.

“I told Donna, and I told Jordan about it about a week after being diagnosed. We were in his kitchen – just me, him and Donna. He said it was the hardest thing he’s ever had to deal with.

“When I saw the surgeon a few weeks after diagnosis he said he’d give me Christmas with my family to spend time with them. Then he’d operate in the January.

“Jordan came to see me the day before the operation. I didn’t want to see him while I went through months of radiotherapy. I didn’t see anyone for that first year because I looked like a leper. Everybody has a different reaction but my face looked like someone had taken a blow torch to it. All over my head was red and it bled – and my wife had to change those dressings daily. Only Donna, one of my brothers and my best friend saw me.” 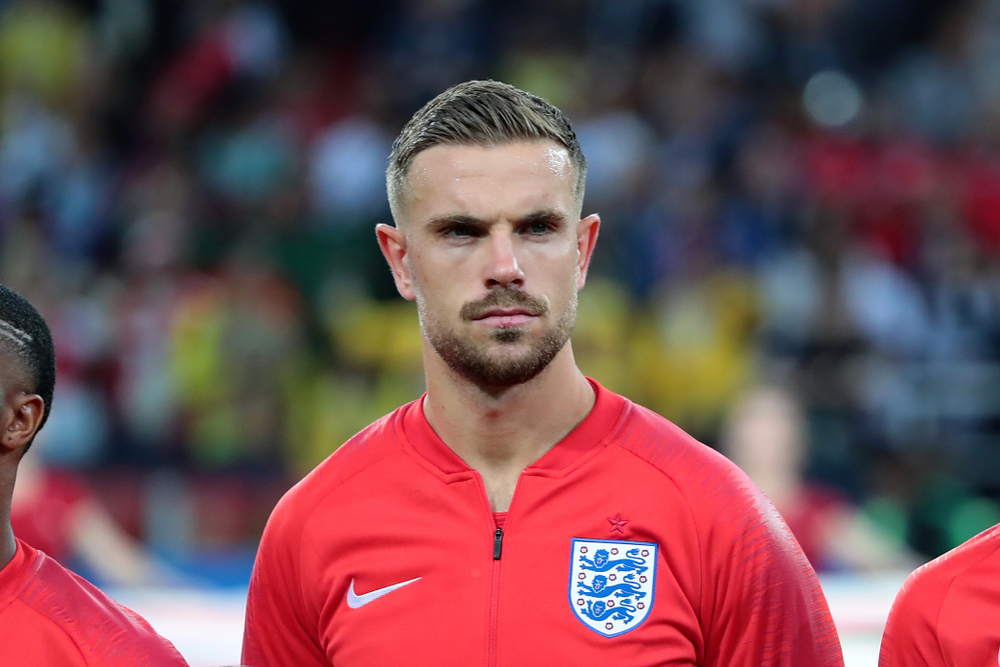 Brian had, though, asked his son to do something for him: “I was diagnosed at the end of November and when I told Jordan I said he could do one thing for me, and that was to cheer me up as I went through it, winning as many Man of the Matches as he could.

“About a week after I’d told him Liverpool played away to Spurs. They won 5-0 – and Jordan was awarded Man of the Match.”

Brian says he has always been proud of his son, and watching him play and succeed is ‘the best thing ever’. “It’s one of the best feelings in terms of loving the sport and your son being successful in that sport.

“Seeing him play for Sunderland was Heaven on earth for me, but when he played for Liverpool…

“Mind, I have always said, as proud as I am of watching him play, I am more proud of the man he has become, seeing him marry, and become a father himself. He grew into the person he is, a leader and a decision maker. I am so proud of him.

Needless to say the number 14 player and LFC captain – an NHS Charities Together Champion and an ambassador raising money for 240 funds – is helping his dad with the appeal to raise the £85,000. 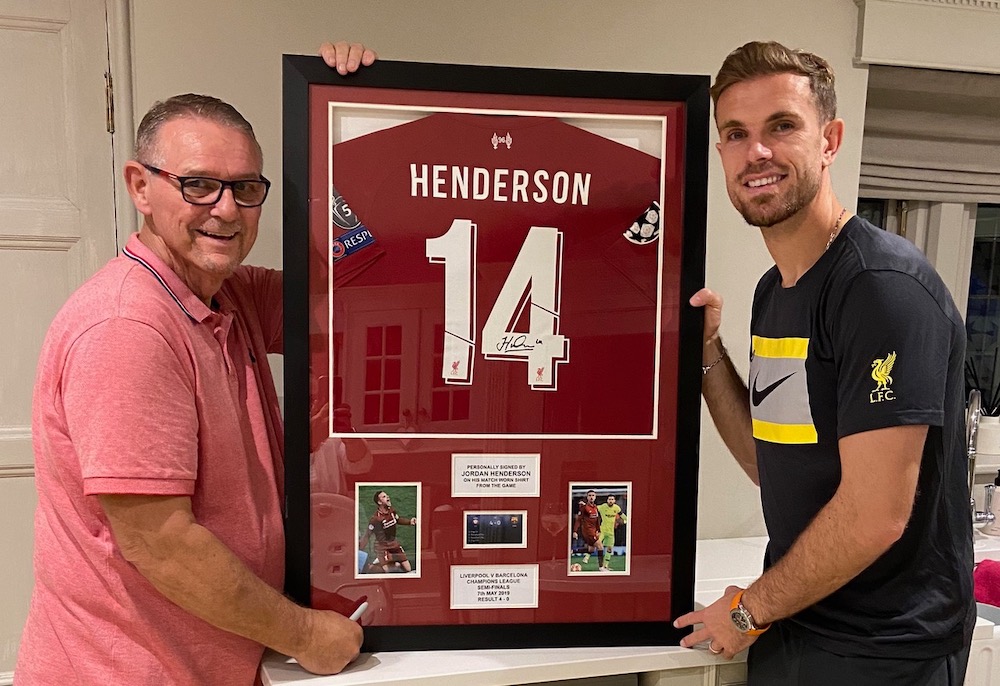 The shirt that Jordan auctioned off

Brian has already raised £6,500 auctioning off a shirt Jordan had worn during the Champions League game against Barcelona in May 2019, and more than £1,000 for one he wore against Spurs, with another being put up for grabs from a Merseyside derby.

Donna herself has been raising thousands, bravely bringing in around £15,000 with a skydive on Sunday, October 24: “She said it has always been on her bucket list.” 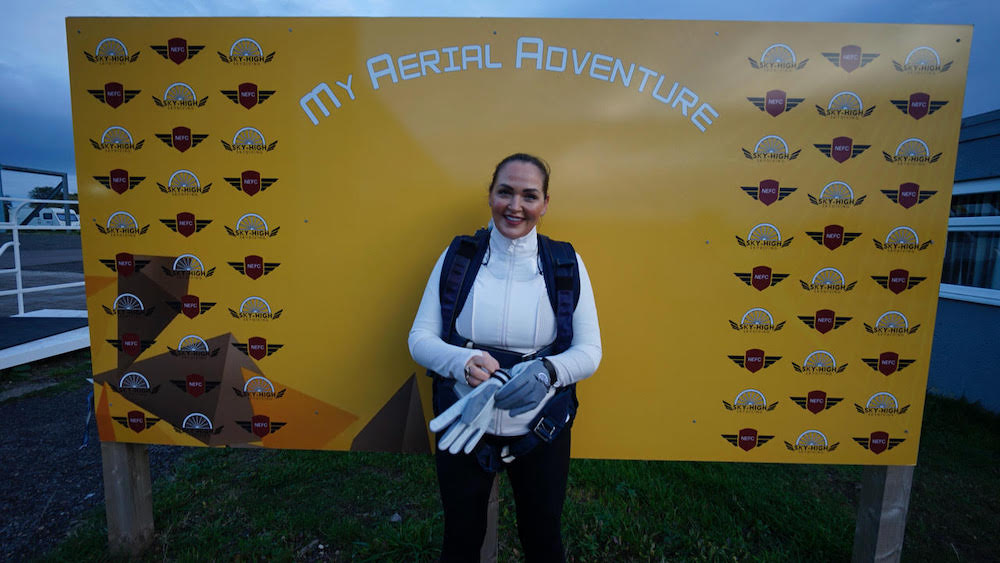 The Jamie Carragher Foundation has also boosted the fund with a donation to take it towards £30,000.

The family, as always, is pulling together: “There are dark times, and you get each other through.

“I wouldn’t be here if it wasn’t for the medical team, my wife, and my family. Knowing Jordan was there for me has always helped.

“Now we want to get in as much as we can to thank the ENT department for what they have done for me and to really help other people coming in with what I had.”

The JustGiving page for the appeal can be found via the website HERE.