Wirral runners take on three days of events and attempt a Guinness World Record - The Guide Liverpool
Contact Us Advertise with The Guide Our Video Services Follow us: 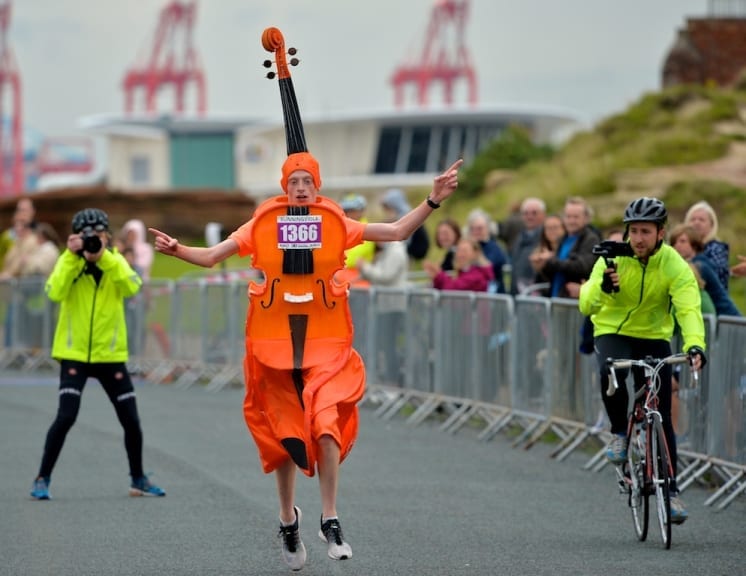 Wirral hosted a weekend hat-trick of races which brought almost 1,700 runners and hundreds of spectators to the destination – including a successful Guinness World Record attempt. Organised by BTR Liverpool, the races covered the distances of 10K, half marathon and a 26-mile challenge consisting of three races completed over three days. 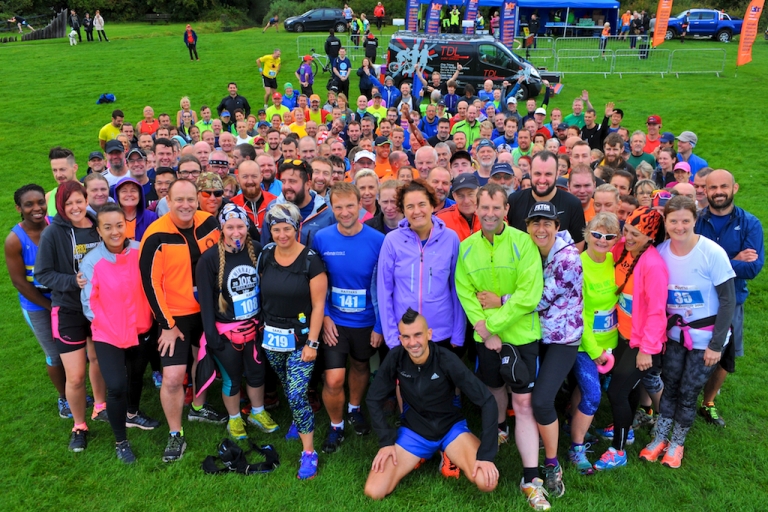 Runners descended on New Brighton on Sunday (9 September) to take part in the dual race of the BTR Wirral Half Marathon and BTR Wirral 10K. This was the fifth consecutive year for the race, which was named as Event Of The Year 2015 at the Wirral Tourism Awards. This year, the 10K and half marathon returned with a slight change to the route due to the extensive ongoing works near the Four Bridges in Birkenhead. The races, which have previously started in Birkenhead Park, this year had a combined start and finish area on The Dips in New Brighton. 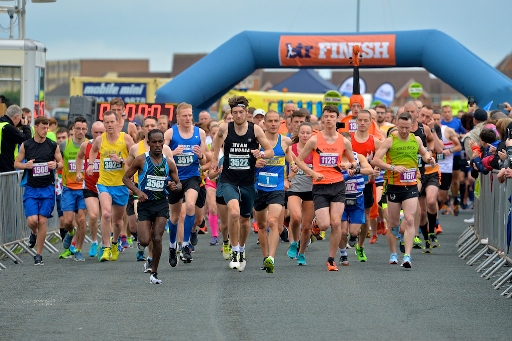 Prior to Sunday’s dual race, almost 250 enthusiastic runners embarked on a 26-mile three-day triple race event – the third annual Whistle Stop Tour Of Wirral. The Wirral Tourists began their challenge on the Friday (8 September) with a 5-mile off-road race at Arrowe Park, followed the next morning with eight challenging multi-terrain miles covering Thurstaston Country Park, Thurstaston beach and the Wirral Way. They then joined the half marathon runners on the Sunday to complete the third race in the series. 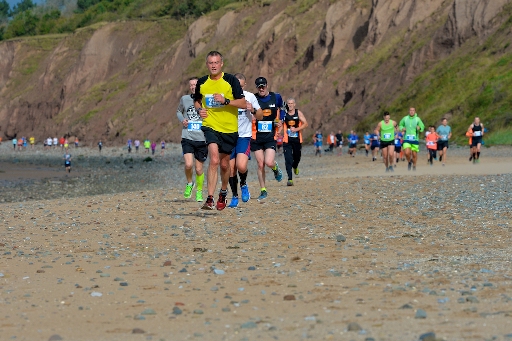 The revised course meant a change to the first three miles of the 10K and half marathon race routes. After setting off from Coastal Drive at New Brighton, the runners headed along the promenade to Seacombe Ferry, before heading back to New Brighton. They then followed the established route passing Fort Perch Rock; along Ian Fraser Walk to the Clown Roundabout.

The 10K runners finished at Coastal Drive, while the half marathon runners continued towards the Leasowe Lighthouse before also returning to Coastal Drive. There were strong finishes all round with some very strong times recorded across the three race events, which attracted participants from Scotland, Norway and the United States of America. 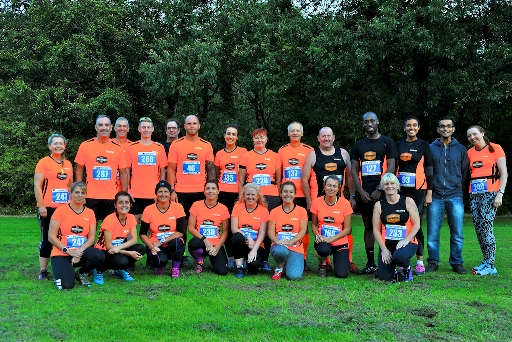 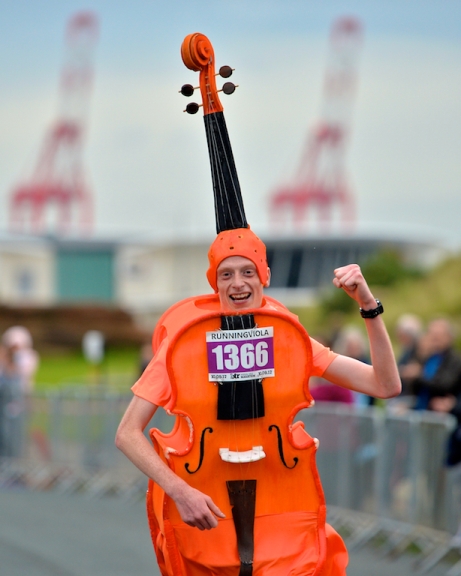 Liverpool’s Alistair Rutherford got some of the biggest cheers on the day as he reattempted his Guinness World Record attempt to become the world’s fastest half marathon runner dressed as a musical instrument – a voila was his chosen costume.

The 22-year-old from Allerton, who runs for Birchfield Harriers, originally attempted the record at BTR’s Liverpool Half Marathon in April. But the record was turned down and music student Alistair had to modify his costume. This time round he recorded a time of 1:24:29 – so has set a new record, subject to official verification.

Alistair Rutherford commented: “After having my first record attempt rejected, I instantly thought that I had to try it again – and why not just on the other side of the River Mersey.”

“I’m relieved to have re-broken the record in a time of 1 hour 24 minutes 29 seconds, breaking the previous record of 1:26:56. I’m now preparing to attempt the Marathon World Record in Birmingham next month. Thank you to everyone for their support and encouragement – I’m delighted to have broken the record at home.” 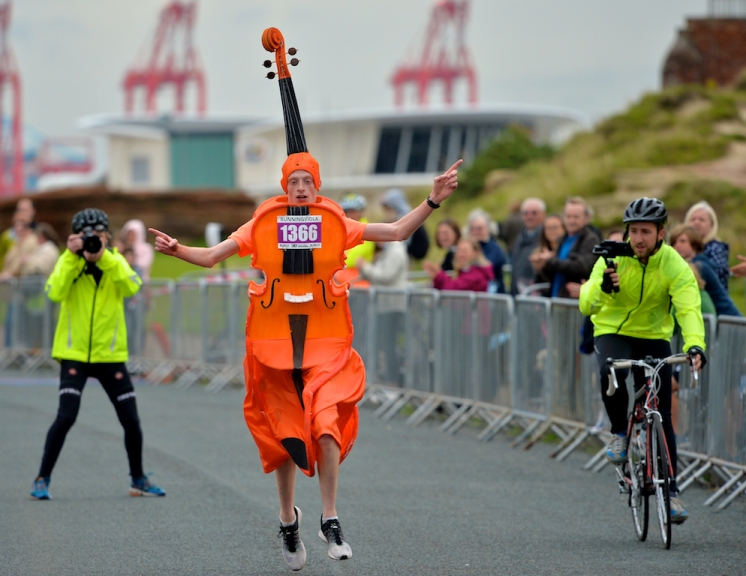 BTR Race Director Alan Rothwell commented: “What a fantastic three days of running. Everyone gave their all across the distances and terrains, and we saw some excellent times recorded despite the challenging weather conditions. We’ve received great feedback about the revised race route for the 10K and half marathon route, and the spectators really did spur everyone on to the finish lines. Thank you to all our volunteers who helped across the weekend, including teams from Everton in the Community, Merseyside Fire & Rescue Service Cadets, and from our event charity Claire House Children’s Hospice.”

Next up in the BTR portfolio is the BTR Mersey Tunnel 10K on Sunday 1 October. Entries are open, visit www.btrliverpool.com for more details.

Show us your medals! Did you take part in the Wirral run series last weekend? We’d love to see your pics, tweet us @TheGuideLpool or email us [email protected] and we’ll share the best on our socials.