Artist who created the world’s biggest Captain Sir Tom Moore mural here on Merseyside pays tribute to inspirational hero - The Guide Liverpool
Contact Us Advertise with The Guide Our Video Services Follow us:

The artist who created the world’s biggest mural of Captain Sir Tom Moore in Southport has paid tribute to him.

Inspirational charity fundraiser Captain Sir Tom Moore, who raised nearly £40million for the NHS, sadly died in hospital at the age of 100 after testing positive for Covid-19.

The veteran, who captured the hearts of the nation with his fundraising efforts during the first Coronavirus lockdown, died in Bedford Hospital on Tuesday (February 2).

He was celebrated with a huge three-storey mural painted by artist Robert Newbiggin on the side of the Anthony James Estate Agents building on Hoghton Street in Southport town centre.

MORE - 8 Merseyside Military Greats that should never be forgotten

“I feel very humble and lucky to have produced what is now recognised as the largest Sir Tom Moore Portrait in the world, larger than life, as he was up in public view.

“I was sad to hear of Sir Tom’s sad passing.

“I hope the painting will be a fitting tribute.

“I have personally given my condolences to the family through his grandson Benjie.” 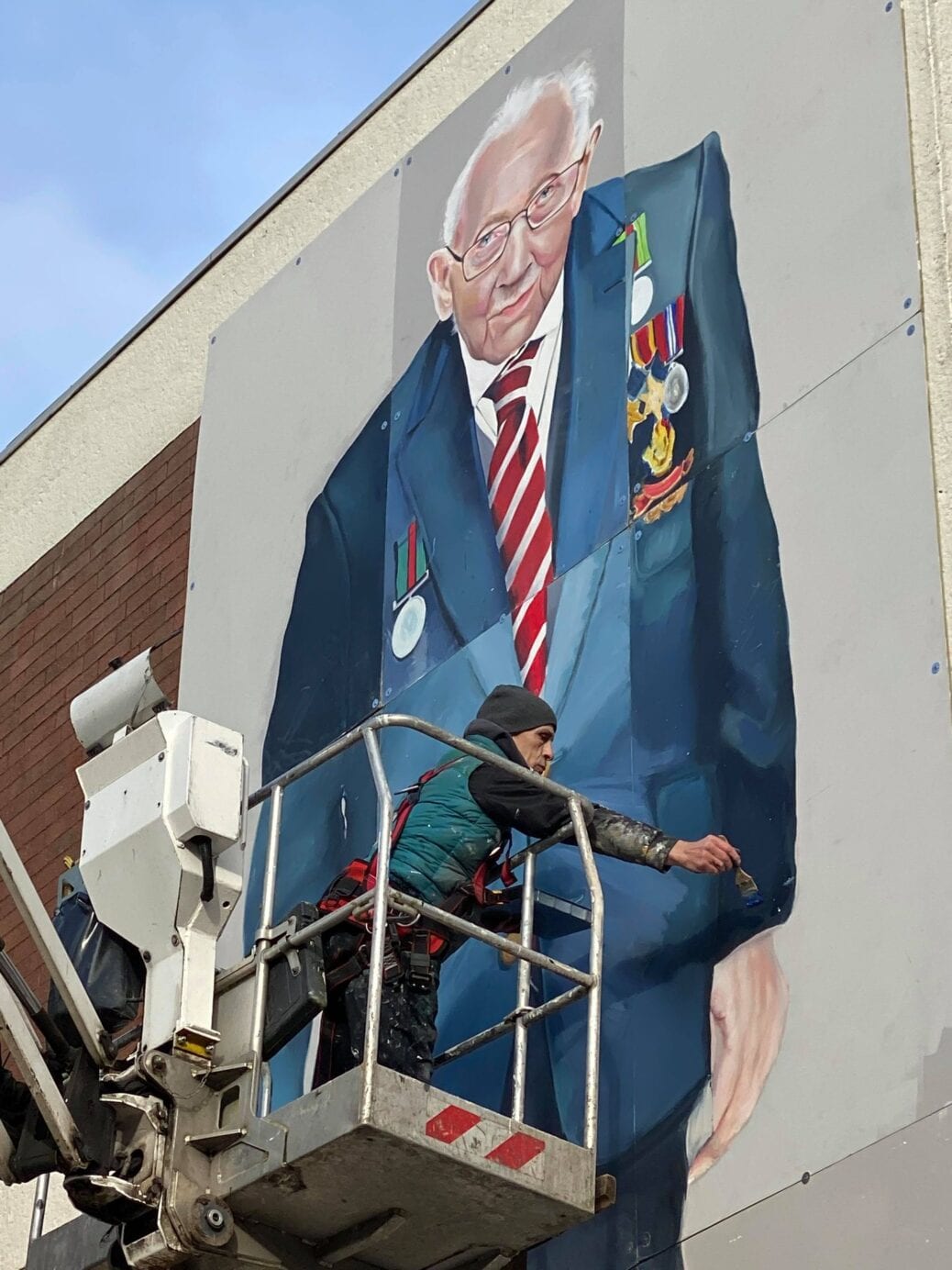 The incredible 24ft high artwork, named ‘Hope’, was commissioned by Mark Cunningham, Lyn Cunningham and Jacqui Holt, Directors of Anthony James Estate Agents, and painted by Robert Newbiggin. It was installed on 6 December 2020.

A second huge mural, featuring some of the NHS heroes who cared for patients during the Covid-19 pandemic, was painted by Robert and was installed on the other side of the building.

Later this year they are due to be auctioned off to raise money for the NHS.

Mark Cunningham said: “We wanted to create something that was a really visual way of thanking everyone on the frontline of our health service and Captain Sir Tom Moore.

“I had the idea early on in the pandemic. Every Thursday night, we would stand on our doorsteps and clap for the NHS, but then the clapping ended.

“So I wanted to create something else that showed our huge appreciation of the NHS and for Captain Sir Tom Moore, after he inspired the whole nation.” 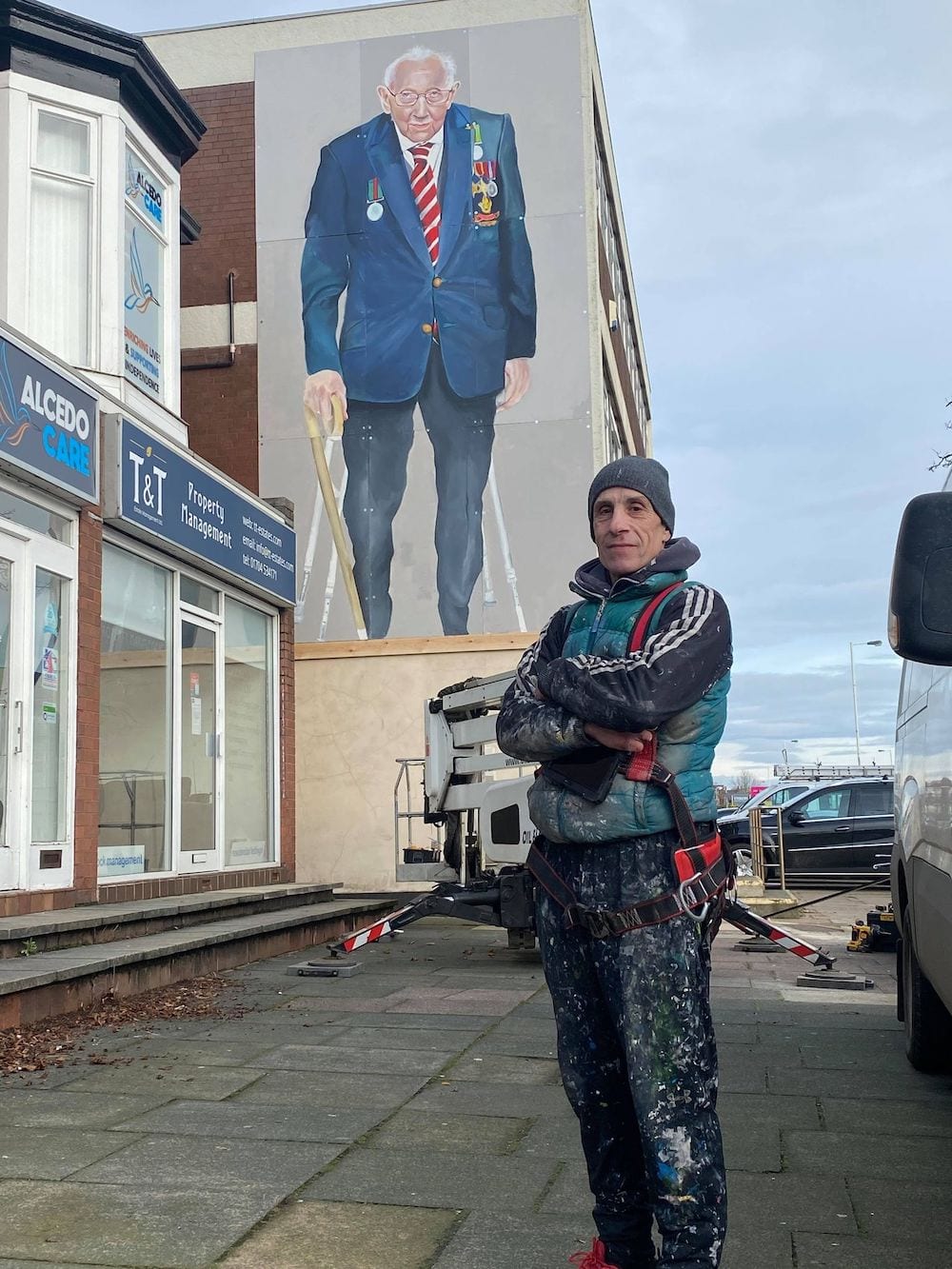 After the war hero’s tragic death, Captain Sir Tom Moore’s daughters Hannah Ingram-Moore and Lucy Teixeira hailed the last year of his life as “nothing short of remarkable”.

They said: “He was rejuvenated and experienced things he’d only ever dreamed of.”

Sir Tom had been taken to hospital on Sunday after being treated for pneumonia for some time and testing positive for Coronavirus last week.

His family praised the care he had received from the NHS and said they had been able to spend time with him in his final hours.