Your Ultimate Guide to January in Liverpool - The Guide Liverpool
Contact Us Advertise with The Guide Our Video Services Follow us:

Your Ultimate Guide to January in Liverpool 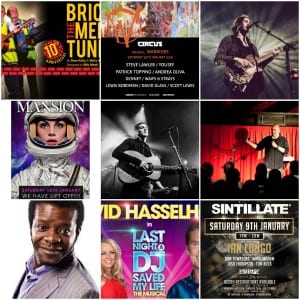 Home › Culture › Your Ultimate Guide to January in Liverpool

So the tree has come down and the turkey has well and truly been demolished. With a wait of 353 days until Santa returns and at least a fortnight of back to work blues upon us, we think we could all do with a little something to look forward to.

January is definitely the Monday of months, however there is still plenty going on in Liverpool to keep us entertained and to keep them Christmas blues banished.

This is your ultimate guide to what is going on in Liverpool during January, dry or not. Theatre, comedy, nightlife & music – we have covered it all for your Liverpool January. 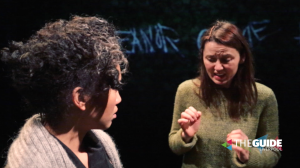 With panto’s and Christmas comedies galore taking over our theater’s at Christmas, the team at The Playhouse have decided to do something different. They have put on a terrifying psychological thriller, the stage version of Shirley Jackson’s novel ‘The Haunting of Hill House’ – a place where no one ever visits, especially after dark.

Watch our video with the cast of Haunting of Hill House. It runs until Saturday 16th January. 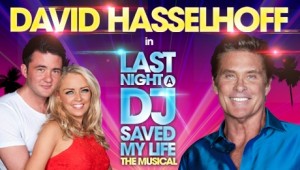 Yes it is true, Baywatch star and Knight Rider himself is coming to Liverpool to star in ‘Last Night a DJ Saved My Life’ at the Empire. A DJ Dad, a wild child daughter, and a trip to the party island of Ibiza with hits from the 80’s and 90’s.  It’s going to be Hofftastic! The Hoff, plays Ross, a hilarious hedonist. He’s Ibiza’s top 80’s DJ who doesn’t realise a new decade has dawned, disco is out, a new club scene is in. It kicks off on the 19th Jan and runs until 23rd.

Cinderella starring Chrissy Rock & Corrie bad boy Marc Bayliss is still on at Theatre Royal, St Helens. And the panto with a difference ‘Repunzel’s Rock n’ Roll Panto’ is on at The Everyman until Saturday 23rd Jan. 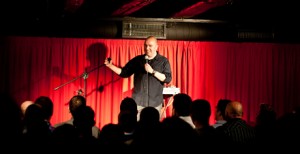 Now one of the cities best loved comedy venues & nights Laughter house has now expanded and as well as its Slaughterhouse Venue it has also taken over the old Eric’s on Mathew Street to bring even more giggles to Liverpool. This month MC’s Neil Fitzmaurice & Chris Cairns bring the biggest names of comedy on stage including Christian Schulte-Loh, Mick Ferry, Keith Carter as Nige and Daliso Chaponda.

We caught up with Chris Cairns last month to talk all things comedy, watch it here 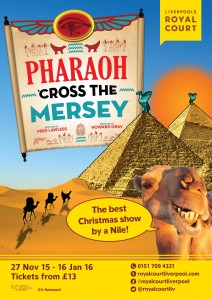 What better way to keep the Christmas vibe going than with the Royal Court’s now famous Winter show written by Fred Lawless. This year it’s Egyptians, Mummy’s and Pyramids that take centre stage with another hilarious Royal Court cast including Michael Starke, Danny O’Brien & Lindzi Germaine. The show runs until the 16th and you’ll also be one of the first to visit the newly refurbished theatre and it’s new striking entrance & box office. 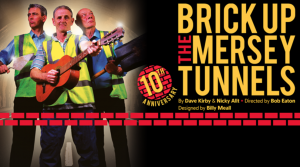 One of the city’s best loved comedies make  a welcome return to the Royal Court this month – ‘Brick Up the Mersey Tunnels’ is back. Whether you have seen it before or you are a ‘brick up virgin’ this is a must see show and will definitely start your 2016 off with one almighty smile. It opens on the 29th January and runs right through until 5th March. Seriously, do not miss this one! 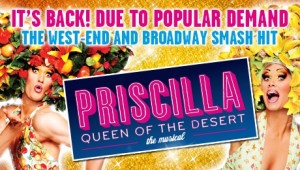 Get ready for the ride of your life as the ultimate party, Priscilla Queen of the Desert the Musical returns due to overwhelming popular demand – starring Jason Donovan as Tick!

Based on the smash-hit movie, the feel-good international hit sensation Priscilla is back at The Liverpool Empire from 25th-30th January. 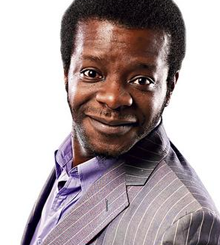 The maestro of feel-good comedy is back on tour with his new show. Fresh from sell-out tours of Australia and New Zealand, as heard on BBC Radio 4 Life: An Idiot’s Guide and What Does the K Stand For?. Stephen is in town on Tuesday 26th January. 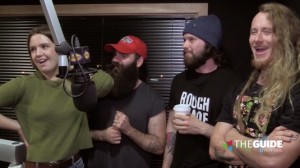 Clean Cut Kid have had a huge 2015, and 2016 is set to be even bigger. Following on from the success of singles ‘Vitamin C’ and ‘Runaway’, tours with Circa Waves, a headline show in L.A and national BBC Introducing exposure, they are now back in Liverpool headlining LEAF this Friday supported by The Bad Habits, The Vryll Society, LUMEN & Polar States. Definitely a gig not to miss and the perfect way to start your 2016 music calendar. We met the guys in Juice earlier this year watch our interview with Clean Cut Kid here. 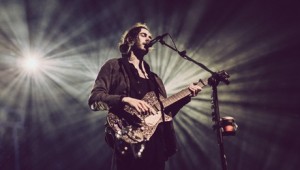 Ivor Novello & Billboard Awards, a multi-platinum debut album, Grammy & Brit nominations and a number one single all over the world – it’s safe to say Irish singer-songwriter Hozier is doing pretty well. He is bringing his only 2015 UK tour to the Liverpool Empire on Tuesday 12th January. 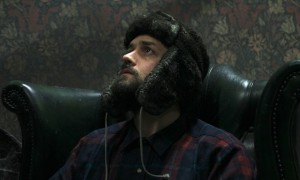 Local musician Chris Macintosh will be performing his beautiful collection of music in the stunning surroundings of Oh Me Oh My in this special intimate solo show, we will certainly be there and if you check out his music below, we are sure we will see you too. 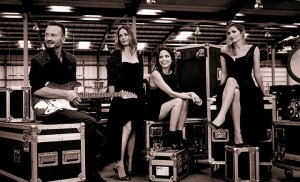 Our favourite Irish siblings are back, and no we aren’t talking about B’Witced.  Having sold an incredible 30 million albums since their career kicked off in 1995, The Coors are one of the most successful groups to ever come from the Emerald Isle. The 4 piece play The Echo Arena on Friday 22nd January. 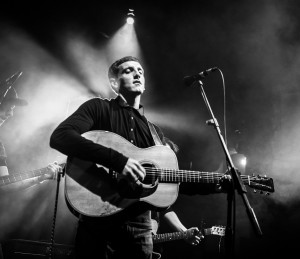 If you listen to our Juice FM show or watch us on Bay TV Liverpool then Louis Berry will be a name you have heard many times. If it is raw talent with plenty of attitude you are after then this is the gig for you. Louis had an incredible 2015 winning the coveted ‘One to Watch’ Award at the GIT’s, touring across the country, releasing his first single and of course smashing the Its Liverpool stage at LIMF 2015. This year kicks off with his own headline tour and a date at East Village Arts Club on Saturday 23rd. Bad news is, tickets have now sold out so if you were lucky enough to get one we will see you on the front row. 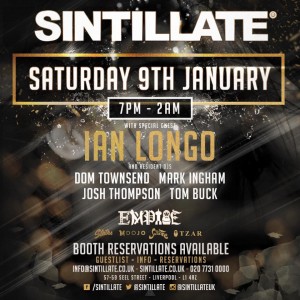 The city’s glam get together every Saturday for the glitzy, bubbly and exclusive Sintillate parties at one of Liverpool’s hottest venues, Empire on Seel Street. Even though it’s January the night continues to sparkle and kicks off on the 9th with DJ’s Ian Longo, Josh Thompson, Dom Townsend, Mark Ingham & Tom Buck.

We met Empire bosses John & Christian to find out what 2016 has in store and to see the new ‘Grande’ floors, watch the video here. 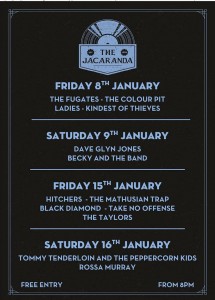 With it’s sparkly new jukebox, fantastic open-mic nights, vinyl record players & the incredible 1948 Voice-o-graph recording machine that records a track directly to vinyl, The Jacaranda is now certainly re-established itself once again as a music lovers place to be. January doesn’t disappoint with a great line up of live grass roots music. The atmosphere in the Jac is second to none, a warm welcome and quality music to get your night started. 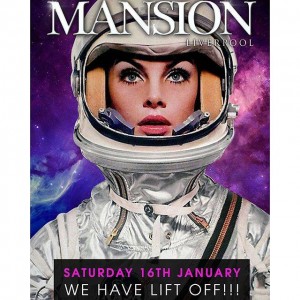 Having just been crowned the ‘Liverpool Echo Nightclub of the Year’ Mansion has a huge 2016 ahead. With the biggest DJ’s in the city and one of the coolest and most glitzy venues, you are always guaranteed a great night at Mansion. They kick off the new year in style on Saturday 16th January with DJ’s Mike Di Scala, Ian Longo, Dom Townsend, Mark Ingham & Rob Mcpartland. 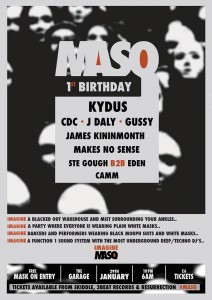 Imagine a party where everyone is wearing plain white masks, spooky or spectacular – we are going to go with the latter. How cool would that be? MASQ turns one on 19th January and you are invited to the party at The Garage Liverpool. Local house & techno DJ, KYDUS will headline. Certainly a night out with a difference and one in our opinion not to be missed. 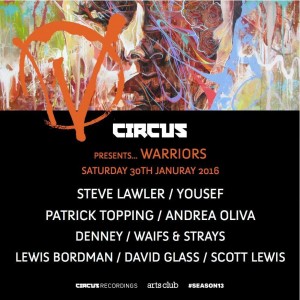 It’s payday weekend after a long Christmas slog feeling a bit skint, so what better way to celebrate than at one of the city’s best loved parties. Circus returns to East Village Arts Club on Saturday 30th January for it’s first shindig of the year bringing it with it Yousef, DJ Steve Lawler, Patrick Topping and more.

So there you go, January might be the Monday of months, but not all Monday’s are miserbale. Get yourself up, out and enjoying what our city has to offer and keep it here for more news on Liverpool’s 2016 event, gig, theatre & nightlife calendar.