Afghan vet and amputee Andy Reid plans Kilimanjaro climb to inspire others and raise £1million for his charity - The Guide Liverpool
Contact Us Advertise with The Guide Our Video Services Follow us:

Afghanistan veteran and amputee Andy Reid is set to climb Kilimanjaro on the 13th anniversary of the explosion which caused his life-changing injuries.

It will be the second time the father-of two has taken on the epic challenge to conquer the highest mountain in Africa – and if he succeeds it will make him the first triple amputee from the UK to make it to the summit.

Andy says: “When I first climbed Kilimanjaro in 1999, I was a soldier, young, fit, and healthy. Me and my mate who I was serving with in Northern Ireland did it in five days, carrying our own food and tent.

“This time it’s physically going to be a very different challenge.”

But Andy adds: “I’m doing it to prove to myself that I can still do these things in spite of my disabilities and my injuries, and to show other people with disabilities or other issues that, with the right mindset, you can achieve anything.”

Andy, 45, from Rainford, St Helens, is under no illusions it will be one of the hardest tests he has faced since losing both legs and his right arm when he stood on a booby trap bomb in Helmond Province in October 2009 while serving for the 3rd Battalion Yorkshire Regiment.

He’ll set off on October 2 to scale the 19,341ft mountain in Tanzania, and will aim to reach its peak on October 13, the anniversary of the explosion. 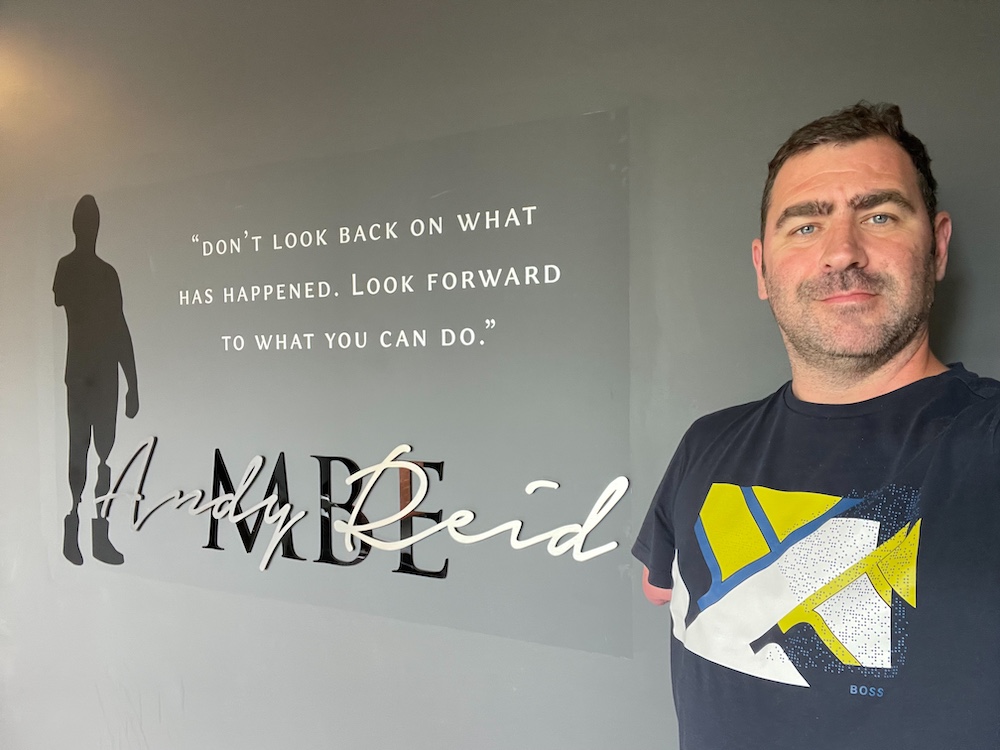 Andy is being accompanied by a support team including his prosthetist Vicki, who has helped Andy in his recovery since 2014 and provided him with artificial limbs; a physio, and his consultant surgeon, Fergus Jepson, a specialist in rehabilitation medicine.

“I have done it before, so in many ways I know what’s coming,” he says. “I know I’m going to get headaches from the altitude; I know that it’s cold at the top, wet at the bottom and hot in the middle,” he smiles.

“But this time things have changed.

“I’m going to have to take charging packs to charge my prosthetic leg; my silicone liner sweats a lot and that can break the skin down…there are lots of other factors to take into account, and it’s not just putting on a backpack and climbing up a mountain.

“So if I am going to climb it I want to put myself in the best position possible. 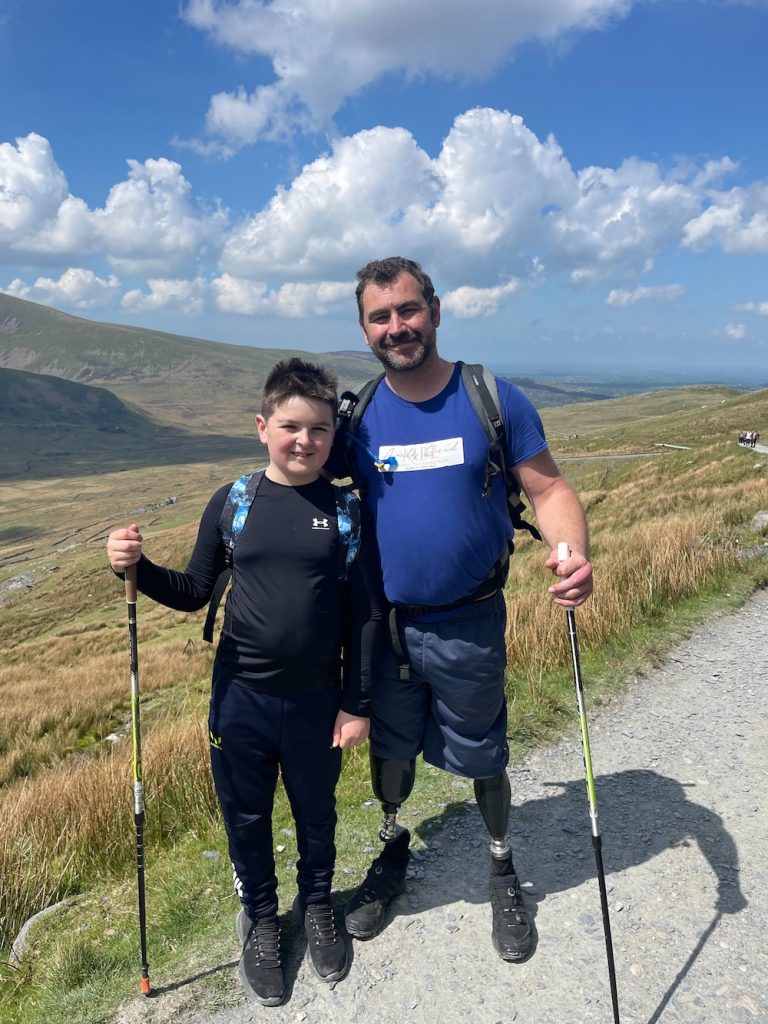 Andy with son William on Snowdon

“I have people round me who are experts in their field, so if I fall over or anything goes wrong, they are there with me. They will make sure I am as safe as I can be, and in the best condition.

“But I’m also pleased they’ll be with me because for the last 10 years or so they have been on the journey with me, making sure I’m as mobile as I can possibly be; it’s thanks to them I am where I am today. So it’s good that they are coming with me and supporting me on this once in a lifetime trip.”

Andy admits there are risks.

“But there are also rewards.  If I complete a challenge like this I will the first triple amputee from the UK to do it, and it will be a massive achievement. It will motivate me to keep moving forward, and it will cause my mental well-being to go through the roof.”

With under four months to go Andy is putting himself through his training paces, handcycling nearly every day covering between 20 to 30km, and going to the local park with his children, William, nine, and Scarlet, four, doing lots of walking.

“I’m going to the gym and doing lots of strengthening and conditioning exercises, and just really trying to build up the strength in my legs so I can hopefully get to the top in one piece.

Having fought back from countless operations and from feeling ‘useless and unwanted’ after suffering his injuries, Andy has raised more than £200,000 for armed forces charities with a host of daredevil exploits from skydiving or kayaking to London, or doing a 400-mile bike ride, or abseiling down The Big One in Blackpool. 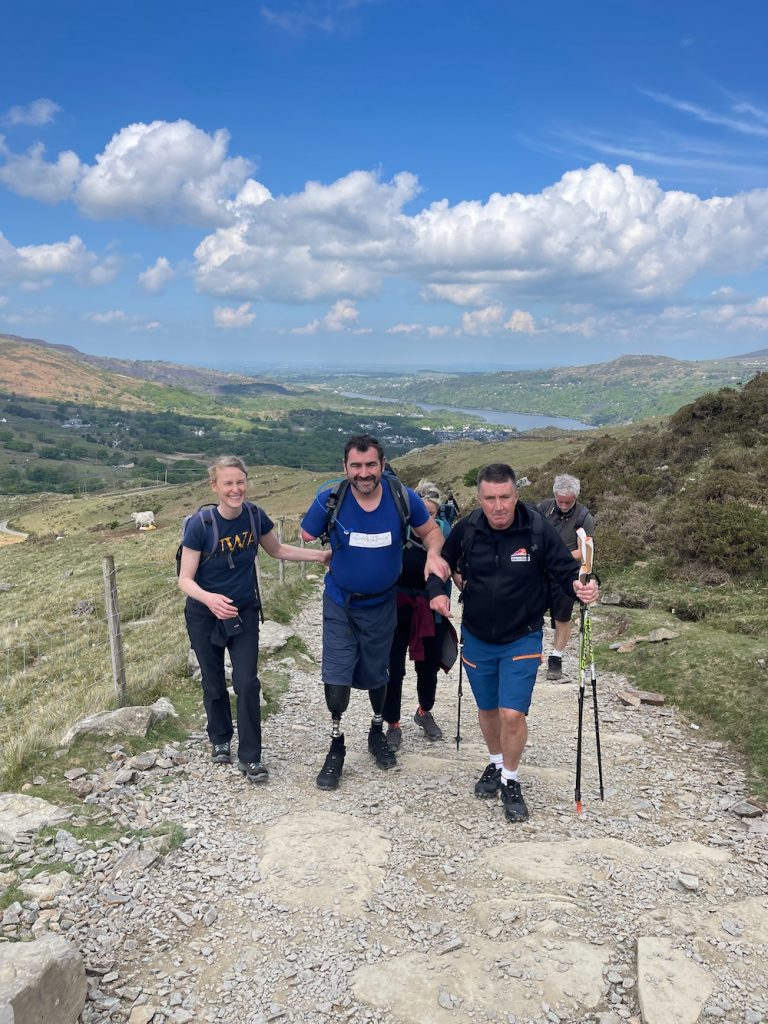 The former soldier, who established the Standing Tall Foundation which aims to support young carers, the vulnerable and care leavers, hopes his efforts to scale Kilimanjaro can help raise £1million for the mental health charity – the most he has ever attempted to raise – with £40,000 already in the coffers from sponsorship as well as money coming in to his JustGiving page.

“We’re being sponsored £10,000 by Uber Eats to deliver a hamburger to the top which will be a record breaker,” he grins.

Andy continues: “It is hard because I will be away from my family for three weeks and so I’m not going to be too selfish – my aim is to maybe do this and then someone else might take over and start doing other fund-raising challenges for the foundation.

“I have done it before and it just seemed like the right thing to do, to climb Kilimanjaro again.

“At the moment I’m feeling a mix of excitement and nervousness. It is a big challenge but I like to have a goal – along with my family, it gives me a reason to get out of bed in the morning.”

To support Andy and the Standing Tall Foundation go to the Just Giving page HERE.