Aigburth neighbours get set for one of the biggest US-style yard sale the city's ever seen - The Guide Liverpool
Contact Us Advertise with The Guide Our Video Services Follow us:

Neighbours in south Liverpool are getting together this weekend to sell unwanted treasures in a big US-style community yard sale.

The St Michael’s Yard Sale Trail will involve around 30 to 40 houses in nearby streets who’ll all be setting out tables, hangers and rails to bring a car boot sale to their own doorsteps.

Organiser Denise Pendleton-Snape says it’s a chance for people to find a new home for all those regretted lockdown buys or things which are no longer needed – and get to know the neighbours better while they’re at it.

“I’d lived around Lark Lane since I was in my 20s but we moved here about a year ago and I just thought, how can I get the community together because I want to know everyone?” she explains.

“We were in Sheffield for about a year and there’s a place called Nether Edge which is a gorgeous Lark Lane/Aigburth type area with nice parks, lots of vintage shops, bars and coffee shops.

“We went there one day and they had this community yard sale on. They’ve been running them for about 10 years over there now and I thought I’d love to do one of those in Liverpool.

“We haven’t got big gardens in these streets, but I thought we could all still get out on our front steps, maybe with a little table or just hanging things on a fence, sit with a cup of tea and chat to our neighbours.

“My daughter goes to St Michael’s school so I’m starting to get to know some mums in the area and I thought I’d just throw a date out and see if anyone was interested.”

Within a couple of weeks, Denise had more than 30 neighbours signed up to take part, so she created a Facebook event page with a map so everyone going along to the sale would know where to head for bargains. 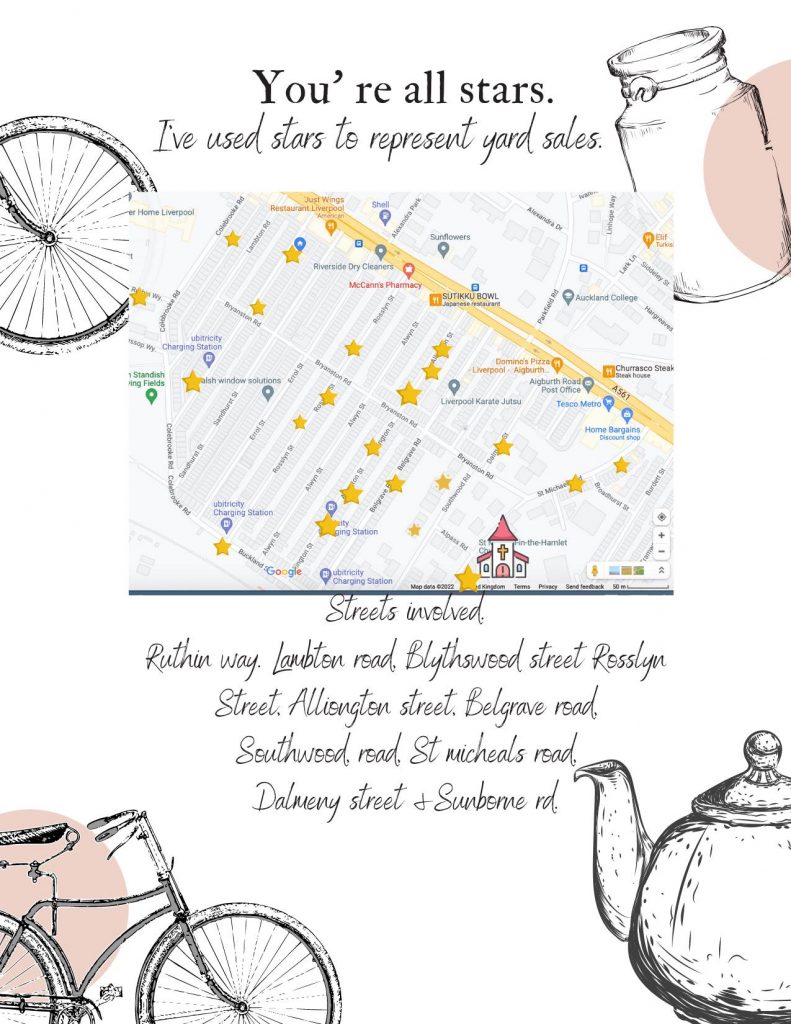 It turned out lots of her neighbours were just as keen to make some extra space at home and move things on that they didn’t want anymore, without having to go to the trouble of online selling or doing a car boot sale.

“It’s just things people don’t have a use or a need for, or maybe they’ve decorated and something doesn’t fit in now because we’ve all become interior designers since lockdown.

“I think we just accumulate so much stuff and now we’ve got all those lockdown things as well, the stuff we bought off Amazon that we didn’t really want and need to sell, so I really hope I see a hot tub on someone’s front step!”

Denise says there’s already a real community spirit around the event – “We’ve got people saying ‘I’m doing it’ so then their neighbour will say ‘I’ll do it too’ and it’s just spread” – and she’s hoping the midday start time on Sunday will make for a good turn-out.

“It’ll be on from 12noon until about 3.30pm, so it’s a nice relaxed time, everyone can get up, have breakfast, get the kids ready, maybe go to church, and then set up so there’s no rush.

“There’s such a lovely mix of people and ages in St Michael’s, and I think it’ll be a nice chance for everyone to just catch-up. When you get to a certain age, you might have family doing your shopping for you or they take you out, but you’re not getting out of the house quite as much to meet people so hopefully this is a really easy way to do it.”

Denise has already been contacted by people in nearby Aigburth and Cressington, so she’s planning to help them organise similar events in their neighbourhoods.

“It’s something different to do on a Sunday afternoon,” she adds. “Lots of people just like a bit of a mooch, so they can come and have a wander around and a nose, and buy others people’s bargains and bits and bobs because you always see things you want.

“I’ll probably end up buying everyone’s unwanted Aldi special buys, then I’ll have to have another yard sale to get rid of them again!”

The St Michael’s Community Yard Sale Trail is on Sunday April 24 from 12 to 3.30pm. You can find out more on Facebook HERE.