Neighbours in and around one Allerton road have got creative to raise almost £1,000 for charity and collect 600 selection boxes for a Liverpool foodbank.

Residents of Plattsville Road and those adjoining it teamed up during the first national lockdown in the spring, making an art trail from house to house.

That was such a success that they decided to keep it going, with Halloween window lanterns and a Disney winter trail.

Now they’ve stepped up their efforts again for Christmas, getting together hundreds of chocolate selection boxes for Micah foodbank to hand out to youngsters.

Rachael Aron, who’s helped to organise the trails and fundraising, says they’ve been overwhelmed by the generosity and support people have shown.

“In the first lockdown, one of our neighbours Charlotte put a poster in her window saying ‘join the What’s App group, we’re going to have an art trail’,” explains Rachael.

“There were about 50 of us and we all did a painting or a drawing to decorate our windows. It gave us something to do, it cheered people up and you could hear lots of people stopping to have a look.

“The What’s App group developed from there, people would offer to pick up shopping for each other and help each other out, and it brought together a really nice mix of ages.”

With tier restrictions limiting the usual Halloween celebrations, another neighbour Chris suggested doing window lanterns so everyone could get their daily exercise walking between houses, and it would give the kids something to enjoy.

“After we’d finished that I jokingly said, ‘we’ll have to do something for Christmas now’ and everyone was really keen so Chris came up with the idea of doing another trail to get everyone in the Christmas spirit,” says Rachael. “We chose a Disney theme and this time we ended up with 42 houses taking part.

“Everyone gave a fiver which went to buy materials and whatever was left went into a donation fund which raised £150. Chris and I sorted out the Disney characters, I sourced silhouettes, we blew them up to A3, and allocated one to each house.

“We all dressed our windows for that weekend, people joined in and put extra Christmas lights outside their houses and some had music playing.

“We were keen to support a Liverpool foodbank so we put boxes out and asked people to give a tin, and we set up a Just Giving page for the Salvation Army. On the Friday, when we started the trail, about 30 people came. But by the Saturday and Sunday we got at least another 150, it was so busy, it was incredible.

“The lights went on at 5.30pm, we did a map and colouring in, and there was a poem written by our neighbour Paul. Every house had a line so by the time you finished the trail you had the full poem.

“There was lots to do, people really enjoyed it and they were so generous. We couldn’t believe the amount of food we were given, I had to keep emptying the boxes every few minutes because they were overflowing.” 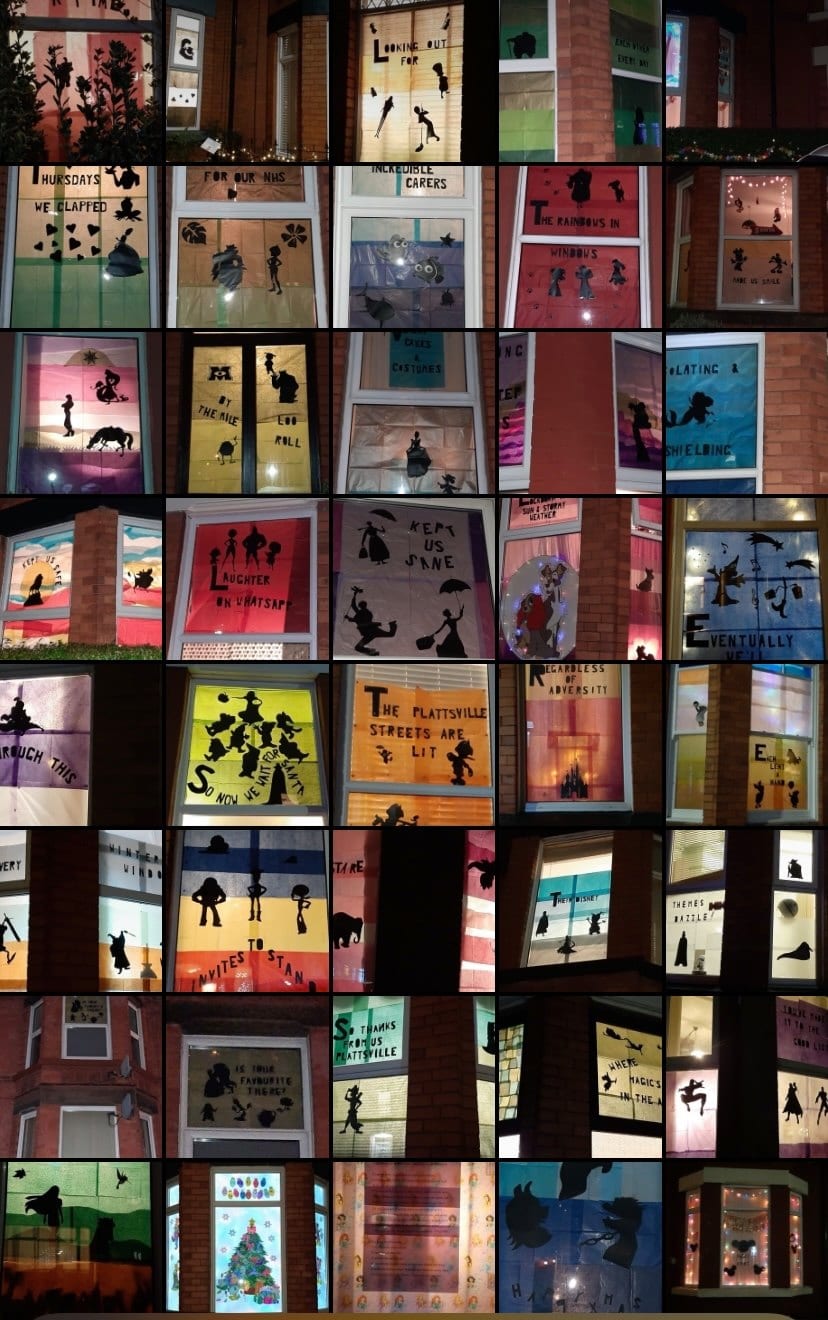 Rachael says families walked to see the Disney trail from not just Allerton but Aigburth, St Michaels and Wavertree.

When they dropped the donations off at Micah, they were told the foodbank was hoping to get 500 selection boxes together to give out at Christmas, and it needed carrier bags to pack with food because they were having to buy those.

“We said we’d ask the street because there’s just been so much enthusiasm, and we managed to get 600 selection boxes and 1,000 carrier bags within five days. Our Just Giving page for the Salvation Army has gone up to over £900 now too.”

Rachael says joining forces with neighbours in lockdown has been such a positive experience, they don’t intend to stop.

“It’s just lovely knowing your neighbours have got your back, I think what’s happened this year has very much changed the way we’ve come together as a community.

“When we put the winter trail out on Facebook we didn’t know how many people we’d get coming, but it was so popular we had people telling us we had to do it every year so the whole street is saying this is what we should do every year. It’s going to be our challenge for December.”