Daredevil Liverpool teenager Jess becomes youngest woman with Down's Syndrome to skydive - The Guide Liverpool
Contact Us Advertise with The Guide Our Video Services Follow us:

Daredevil Liverpool teenager Jessica Williams has jumped into the record books, becoming the youngest woman in the UK with Down’s Syndrome to skydive.

Jess, from south Liverpool, set her sights on the incredible feat to mark her 18th birthday and to raise money for Palmerston School in Aigburth where her mum Nicola works with young people who have learning disabilities.

And despite feeling a few butterflies before taking off, she completed a tandem skydive from around 15,000 feet – even managing to land with a smile on her face! 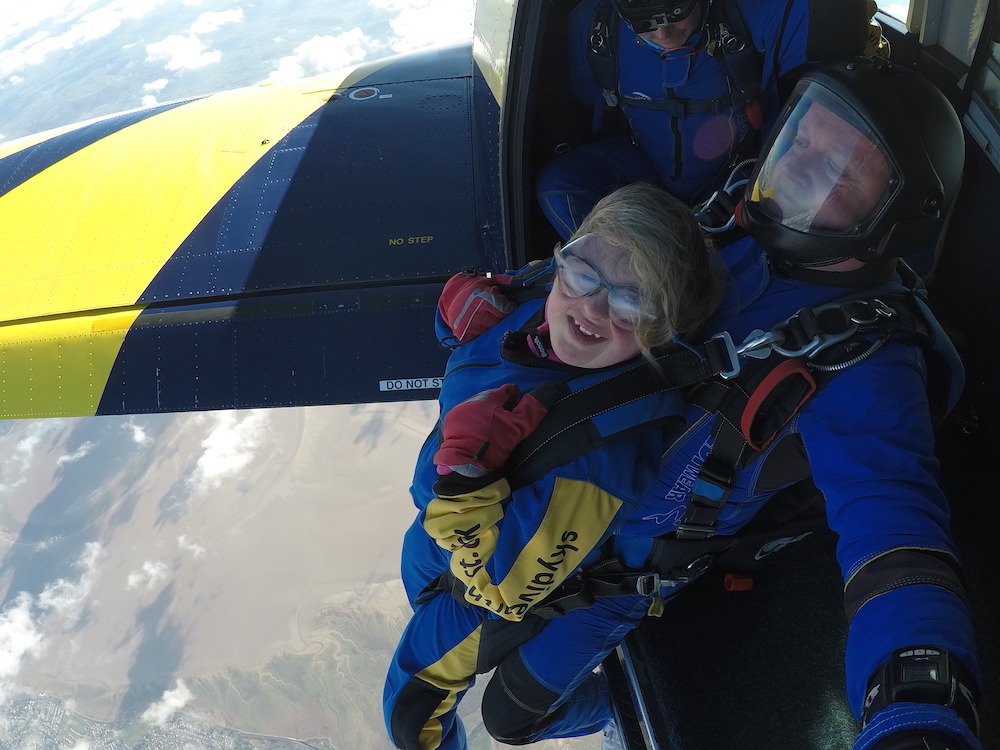 “She was frightened but her attitude was that she was going to do it anyway and she was amazing,” says Nicola.

“Leading up to the jump I didn’t want to build it up too much just in case she really was struggling but when I asked her how she felt she just said she was a bit nervous, but she couldn’t wait to do it.

“I’ve always thought that she’s fearless, she was always the one who went straight to the top of the climbing frame as a child, but now I think it’s more that she’s just got total confidence in herself and she’s determined to show everyone what she can do.”

Nicola says the skydive in the Lakes almost didn’t happen as planned because of bad weather on the day.

“Her dad came to see her, and my brother, so she had a bit of a gang there supporting her, but when we registered, they said there was a chance they wouldn’t jump because the wind levels were too high.

“I told them she was hoping to break a world record so they said as soon as the wind dropped, they would put her as a priority. We went away thinking we’d have to rearrange but within half an hour the wind completely dropped, so they said she could go and get ready. 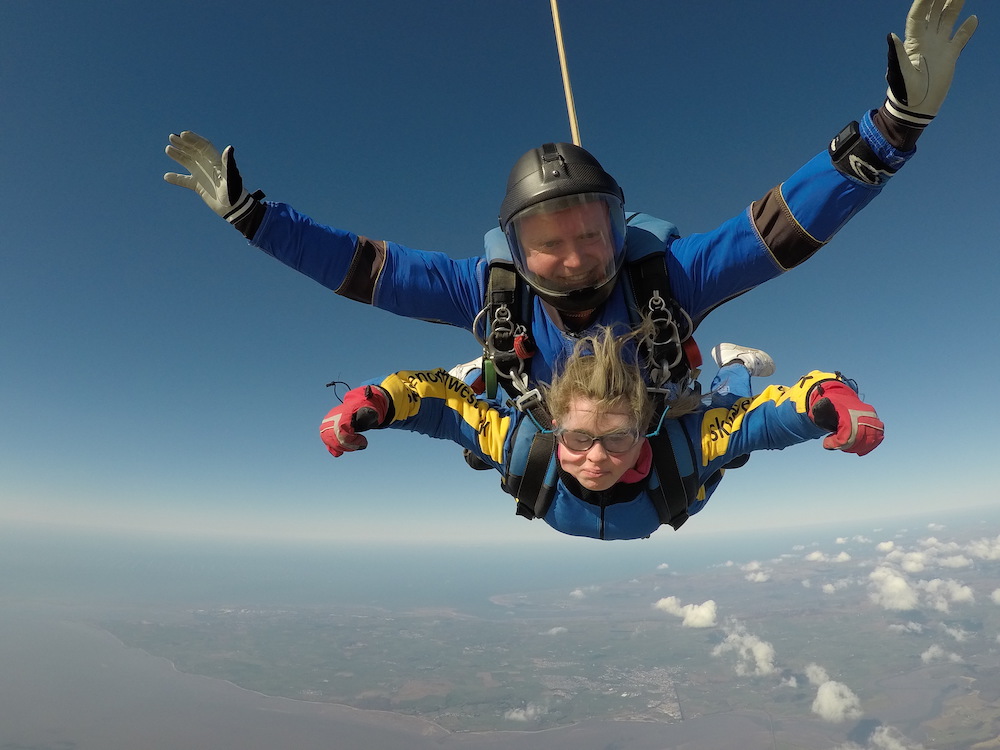 “She did all the training totally independently, got her overalls on and went through the equipment and health and safety.

“There was another lady who was probably in her 60s or 70s and they just buddied up together, she ended up linking Jess so they were supporting each other which was lovely.”

Nicola says while Jess was excited to get up in the air, she was a bag of nerves waiting and watching on the ground.

“I honestly don’t know how I held it together. I was trying my best not to show panic and be cool but my heart went.

“There was an area that spectators couldn’t go to so she walked off to wait where the plane was, I could see her go up the steps onto the plane, and then we were watching it go really high. She was the last on so she was due to be the first off and I knew there were four jumpers.

“Someone said to me, ‘oh the first one’s out’, then I was looking at the sky and I saw four different parachutes and I knew she’d done it.

“She had bright pink shoes on and I could see them so I knew it was her. The relief was incredible and I was so happy for her. 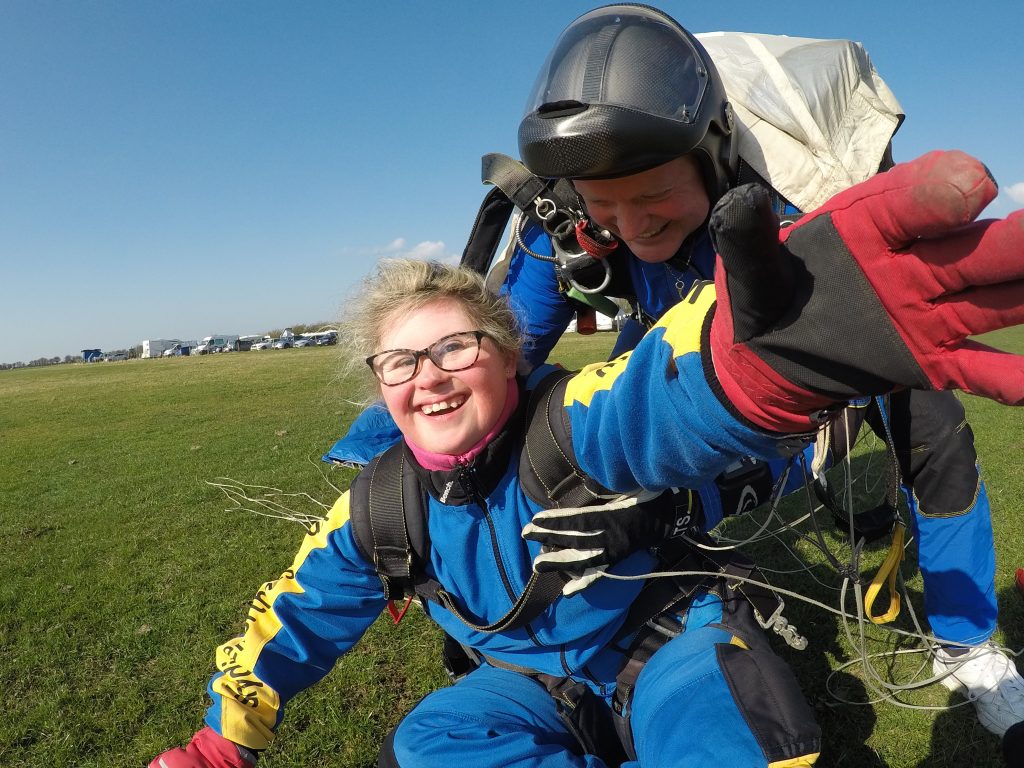 “When she landed she just strolled over and went ‘mum, I did it!’– and the fella who did the dive with her said she was the perfect student, listened to everything, really sensible.

“It was one of the best things, and probably one of the worst, I’ve ever been through. But she just couldn’t take the smile off her face and that made all the sleepless nights and all the worrying worth it because she’s got that achievement.”

Nicola says Jess has always defied expectations – she survived open-heart surgery as a newborn baby to correct three large holes which were threatening her life, and at the age of four she developed a heart block and had to be fitted with a pacemaker to keep her heart beating.

She’s gone on to become a model, actress and singer/songwriter.

“I knew deep down that once she put her mind to doing the skydive, nothing would stop her. Jess is always going to be that person who goes out and grabs life,” says Nicola.

“She actually wanted to go back up and do it again but I told her to keep her feet on the ground for now. I said, ‘if you want to raise money for other people, which is a really nice thing to do, just sit in a bath full of beans, something nice and safe with no jumping out of planes!”

Jess is near her £2,000 Go Fund Me target for Palmerston School. To support her, go to the website here.

MORE - Why Tres is the perfect destination for your night out