Disney On Ice presents Magical Ice Festival is skating into Liverpool in 2020 - The Guide Liverpool
Contact Us Advertise with The Guide Our Video Services Follow us: 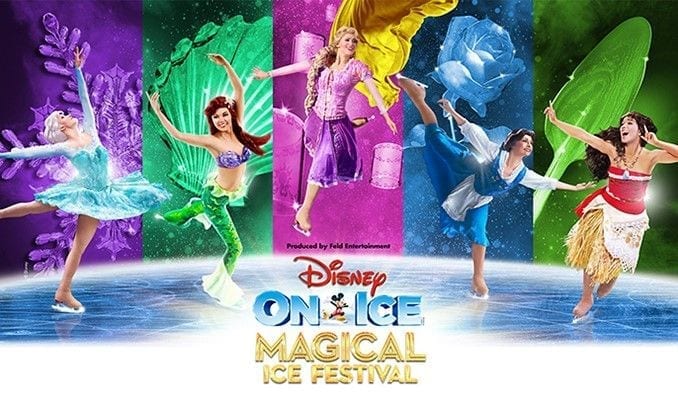 Gear up to enter a world of excitement as Mickey Mouse and Minnie Mouse bring the most awe-inspiring moments from across the Disney kingdom to Liverpool in Disney On Ice presents Magical Ice Festival. This spectactular show skates in to M&S Bank Arena Liverpool from Thursday 26 March – Sunday 29 March 2020.

Tickets go on sale to the general public on Friday 18 October. Disney On Ice priority customers can take advantage of the pre-sale window, which begins tomorrow (Friday 11 October at 9am). To register as a priority customer, enabling show discounts and advance booking to get best seats prior to general public on-sale, go to www.prioritycustomer.co.uk. Show information can be found at www.disneyonice.co.uk

See how far Moana will go when she embarks on an action-packed voyage with mighty demigod Maui. Experience Anna’s devotion to her sister, Elsa, on her journey to stop an eternal winter. Sing along with Sebastian as he strikes up his band along with the Daughters of Triton as they introduce Ariel. Get tangled up with a chorus of rowdy inhabitants from the Snuggly Duckling when they get a visit from Rapunzel and Flynn Rider. Relive a tale as old as time when Belle opens her heart to new adventures as the Beast’s enchanted objects take center stage for a dazzling skating spectacle.

“The most exciting part of bringing characters like Anna and Elsa to the ice is knowing that they have a powerful and inspiring message the resonates with audiences as the sisters discover the true meaning of love,” says Producer Nicole Feld, “As parents, we strive to find role models who will empower our children to find their inner strength and believe in themselves”.

Magical Ice Festival is an exhilarating showcase of royalty, highlighting the stories of Disney’s most beloved heroines and their faithful companions with energetic choreography that will have audiences singing, dancing and cheering for their favorite Disney characters as they each embark on their own epic journeys.

“By pulling together moments from classic Disney stories to the breakout feature film sensation Frozen and combining them with elements of comedy and music, we developed a truly unique way to re-tell each fairytale,” says Producer Juliette Feld.

Feld Entertainment’s cast of world-class skaters will once again showcase their undeniable talent with a aerial Spanish web act featured during The Little Mermaid segment. Ariel transforms from mermaid to human when she emerges from Ursula’s cauldron, and dangles 35-feet over the ice, showing off her brand-new legs. During the Tangled segment, 2,000 feet of silk representing Rapunzel’s magical, golden tresses winds throughout the rafters of the arena and drapes down to the ice for use in a heart-stopping aerial displays as Rapunzel and Flynn Rider escape the tower, flying 25 feet up in the air and performing daring acrobatics.

“Audiences will be entranced as they watch Ariel pulled upwards and then rapidly twirl above the ice,” says Director Patty Vincent. “We wanted to capture the moments and attributes that truly define these beloved characters and we’ve really done that through these stunning athletic performances. That’s what makes Magical Ice Festival different, we selected iconic scenes and then took our time on the details to create truly awe-inspiring performances.”

With its extreme talent and enchanting storytelling jam-packed into one show, Disney On Ice is sure to inspire audiences to Magical Ice Festival.  Everyone takes part from Gaston debating which of his many ‘talents’ he should perform; the rowdy inhabitants of the Snuggly Duckling from Tangled unleashing musical mayhem with giant frying pans in hand; and the Daughters of Triton rocking out to a totally 80’s mix bridging the gap between generations and helping families to create memories to last a lifetime.