Doctors at Alder Hey saved the beautiful smile of the little girl we never thought we’d have - The Guide Liverpool
Contact Us Advertise with The Guide Our Video Services Follow us:

After going through treatment for cervical cancer in her early 20s, Marie Saxon knew she’d never conceive a child of her own.

It was only when a best friend offered to be a surrogate that she and husband Chris thought their dream of having a baby could finally happen.

When baby Grace was born with a rare syndrome which left her with abnormalities including a painful and blistering birthmark that covered the lower half of her face, Marie admits: “I did wonder, why us?

“We had been through so much to have her, and I couldn’t believe it hadn’t been enough, that we had to go through more.”

Thanks to the care and expertise of doctors at Alder Hey Children’s Hospital, however, her birthmark has virtually disappeared, and Grace is doing well, growing into a confident little girl who loves the swings and playing with her dolls.

“I count my blessings every day. I’m thankful and very lucky to have got our little girl.

“Grace is the best thing that’s ever happened to me and Chris. We’d love each other regardless but she has made our lives complete.”

It’s the happy ending Marie had hoped for after facing her biggest challenge 16 years ago at the age of 23. She was diagnosed with cervical cancer and given only a 50-50 chance of survival.

“It was quite advanced by the time I was told I had cancer. I had six months of chemotherapy and radiotherapy, after which I knew I wouldn’t be able to have children naturally.

“The process of saving eggs wasn’t as good then so I didn’t have any frozen and, even so, I wouldn’t have been able to carry a child myself.

“When it happened, I wasn’t even thinking about children. Although I knew I might want them in the future, the important thing was saving my life.” 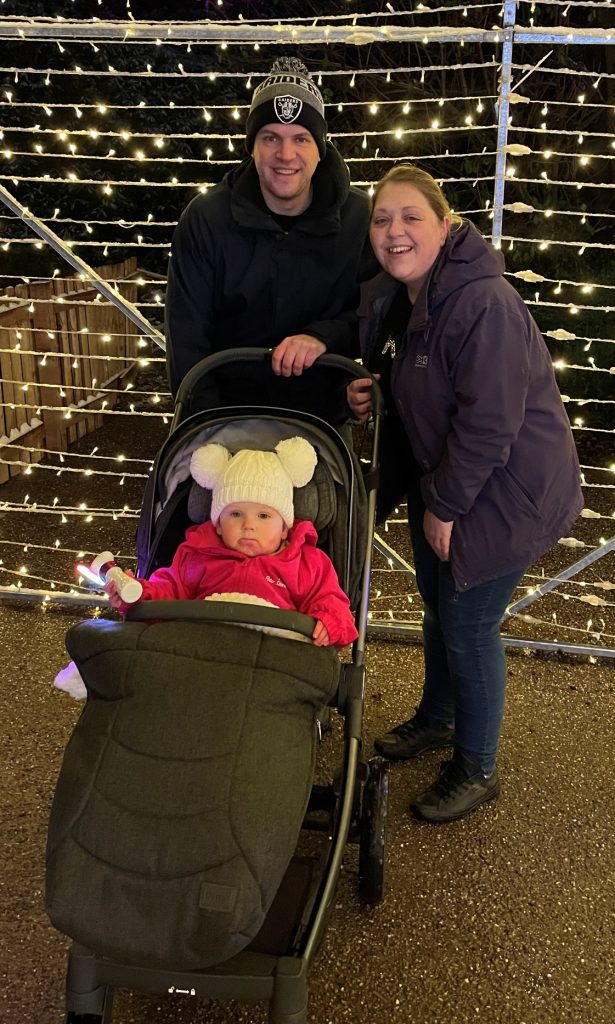 Marie with Chris and Grace

“Chris and I discussed children before we got married, but it wasn’t an issue. He was happy to be with me, and we said we’d cross that bridge when we came to it.

“I’d accepted it because I’d always known, and I just assumed we’d have to adopt.”

But when one of Marie’s friends offered to be a surrogate, it seemed like the perfect solution.

“My friend Georgina and I had known each other from primary school, so when she said she would do anything to help us, we started looking into it. It was a long process, taking about three or four years, but we did everything properly, getting solicitors involved.

“We were very fortunate that Georgina said she would be a surrogate, otherwise I don’t think we’d have gone down that route. But I knew Georgina, she has three daughters of her own, and I trusted her and felt comfortable with her doing it.

“We went to a clinic in Manchester and used a donor egg and Chris’s sperm. The first procedure didn’t work but the second one did, and we were delighted.”

The pregnancy went well and everything seemed fine, so Marie and Chris were shocked when Grace was born on May 26, 2020.

“We knew something wasn’t right,” explains Marie. “Grace had a small mark on her face and there was a slight dip in her chest. 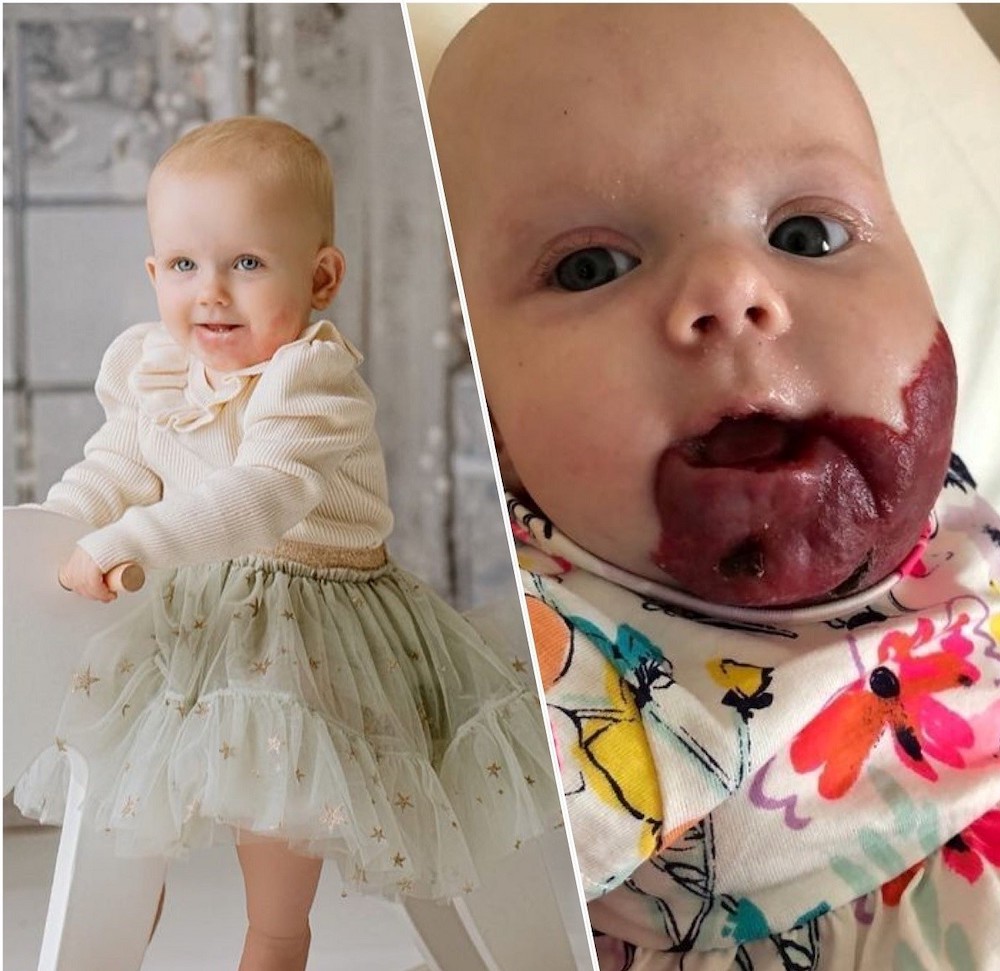 “She had MRI scans and tests in the Wigan hospital where she was born, then she was referred to Alder Hey before we took her home.

“It was hard and stressful because it was the pandemic so we had no support because people couldn’t come to us. Grace was fine in herself, developing normally and feeding, but then the mark on her face started to get darker very quickly, then ulcerate, so she had difficulty feeding and she was in a lot of pain.”

Graced was fast-tracked to Alder Hey where she was diagnosed with PHACES Syndrome, a rare disorder affecting multiple systems of the body and characterised by several different abnormalities occurring together.

PHACES stands for: (P)osterior fossa and other structural brain malformations; large (H)emangiomas (birthmarks) of the face, neck, and/or scalp; anatomical anomalies of the cerebral or cervical (A)rteries; (C)ardiac anomalies/(C)oarctation of the aorta; and (E)ye abnormalities. Sometimes (S)ternal anomalies occur. It’s not known what causes it.

Grace was born with part of her sternum missing but enough to protect major organs like her heart. She may need surgery as she gets older, but that will probably be more cosmetic.

Her greatest issue was the hemangioma, caused by an overgrowth of blood vessels that appear as a red, purple, or blue birthmark. They may not be present or noticeable at birth, like in Grace’s case, but they become apparent and grow in the weeks or months afterwards.

“It’s the unknown that’s the worst,” says Marie. “I can remember looking at Grace and thinking she was never going to get any better.

“We didn’t know what, if anything, could be done for her. But Alder Hey was amazing. 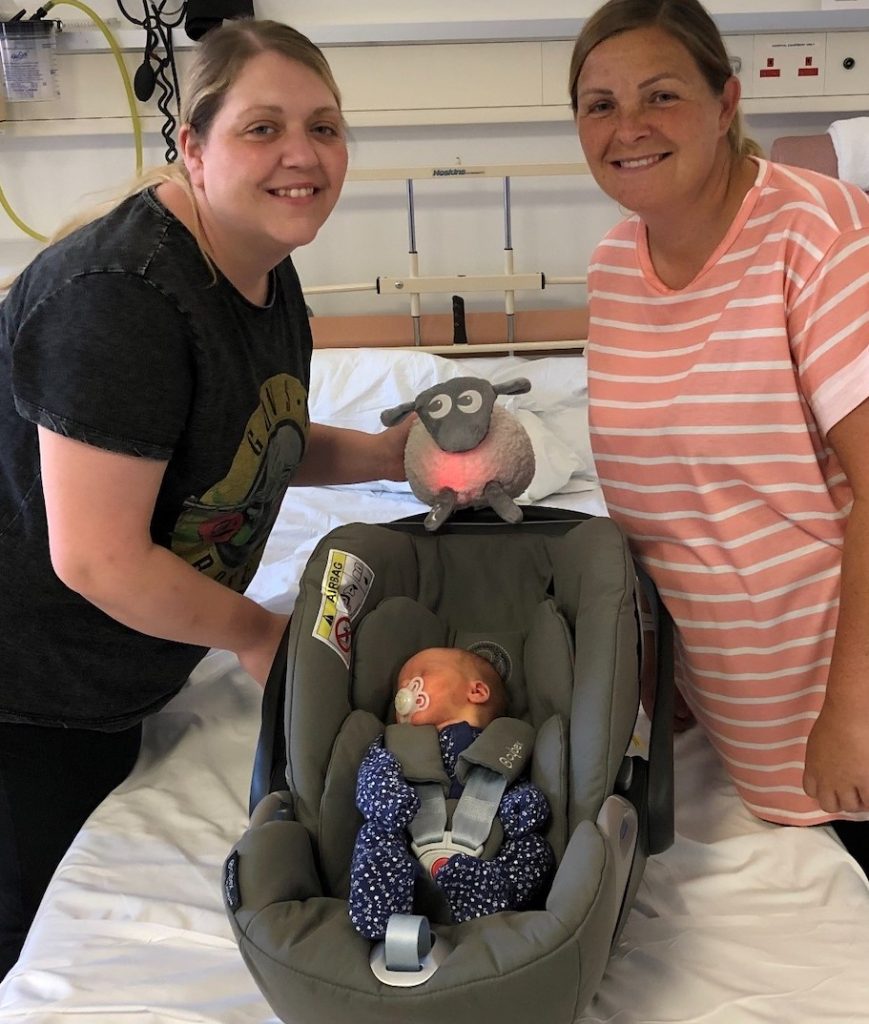 “For the hemangioma, Grace was given Beta Blockers to restrict the blood supply to the area and gradually it started to go down. It’s really faded now and might go down even more by the time she’s two in a couple of months, but even if it doesn’t, now she she could feed properly and wasn’t in pain, we felt even if it didn’t fade as much as we’d like, it was just a little mark on her face, not the end of the world).”

Marie says: “Grace means everything. She is the best thing that’s ever happened to us, and I’d go through everything again, and more, to have her. She’s just perfect.

“And we’re thankful to have a friend who would do something so wonderful like this for us.”

And Marie smiles: “When we were going through the pregnancy during Covid, we used to say ‘this baby will be our saving grace’. So when she was a girl, we called her Grace.

“And she is our saving Grace.

“She has saved our faith in humanity and made us realise that good things do happen to good people.”

MORE - WATCH: All of the events coming to Camp and Furnace this Spring