Everything you need to know about the I'm a Celeb, Gwrych Castle, just around the corner in North Wales - The Guide Liverpool
Contact Us Advertise with The Guide Our Video Services Follow us:

Everything you need to know about the I’m a Celeb, Gwrych Castle, just around the corner in North Wales

I’m A Celebrity… Get Me Outta Here! has a new home, for 2020 anyway! Gwrych Castle is just past Rhyl in North Wales, an hours drive from Liverpool!

Normally filmed in Murwillumbah on the east coast of Australia, camp and crew have shifted thousands of miles and numerous time zones to Gwrych Castle in Abergele, Conwy, a little way down the coast from Colwyn Bay.

We now have a line-up too – Vernon Kay, Mo Farah, and Victoria Derbyshire are amongst the campmates – but it’s hard to know what they’ll face when they enter the, erm, jungle. We’re expecting far fewer crocodile penises and kangaroo anuses, and an awful lot more rain.

Here’s what you need to know about Gwrych Castle, the medieval castle that’s hosted kings and countesses… and now Ant and Dec.

Literally translated as “hedged castle”, Gwrych is a sprawling network of ramparts and towers that was among Europe’s largest buildings on completion in 1822. Grounds and garden total 250 acres, while the castle sports 18 separate sets of battlements. Set on a windswept hillside surrounded by forest, the windows look out over swathes of former parkland, and on to the Irish Sea.

The whole site is undergoing a wide-reaching restoration, under the guidance of architectural historian Mark Baker, whose tireless campaigning saved the site from near-dereliction. A passion project dating back to his childhood, Baker raised awareness with books and exhibitions about the castle’s past, and set up the Gwrych Castle Preservation Trust which now owns the property.

Baker’s work is ongoing, and much of the castle remains roofless, opening directly to the elements. Though the contestants will be spending a lot of their time outdoors, shelters have been set up for indoor trials, and the main camp.

Perhaps inevitably, there’s a sting in the tail, and the castle is apparently haunted by the ghost of its former owner. The Countess of Dundonald is said to still wander the towers, after spending life trapped there in an unhappy marriage, and rumours abound of strange rattles and disembodied footsteps.

Prior to the pandemic, the castle hosted ghost tours in the grounds, and was visited by self-described paranormal investigators.

What is its history? 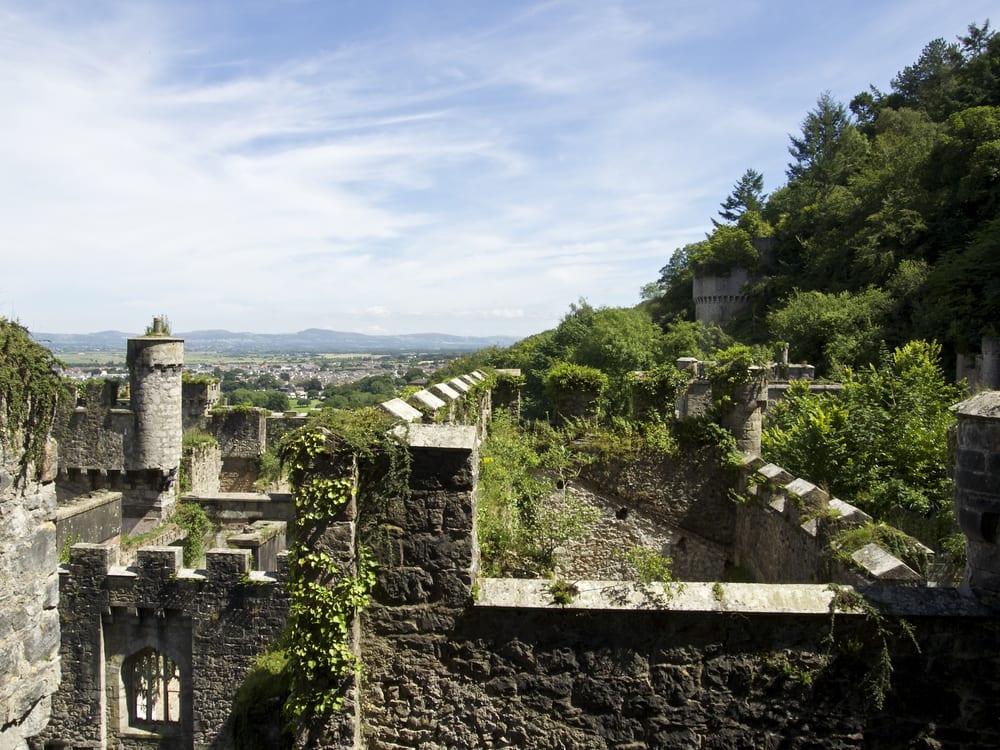 Robert Bamford-Hesketh succeeded Lloyd, planting the Monkey Puzzle and Yew trees that still stand in the gardens today, before the Earls of Dundonald took possession of the property via a marriage to Bamford-Hesketh heiress, Winifred.

Probably the most noteworthy individual in the castle’s 200 year history, Countess Winifred was a polymath of staggering range. She was a published poet, set up awards for harp-playing, financed archaeological excavations, organised political rallies, held exhibitions for female artists, and founded two military hospitals during the First World War. She also single-handedly managed her own estate – almost unheard of in Victorian Britain.

During the Second World War the castle hosted several hundred children from the kindertransports, before being sold by the Dundonalds in 1946, ending almost a millennium of family ownership.

It has since moonlighted as a medieval entertainment centre – with banquets and jousting re-enactments – before being saved from disrepair by Baker.

Today the Grade I listed property is about to enter a new chapter, one quite unlike any its seen before. “I’m hoping the celebs will venture into town,” Shirley Jones-Roberts, Mayor of Abergele, told ITV back in August, “the town is buzzing already.”