Iconic Liverpool buildings bombed in the Blitz which still stand today - The Guide Liverpool
Contact Us Advertise with The Guide Our Video Services Follow us:

It’s more than eight decades since the Blitz wreaked devastation on the city.

Liverpool’s port status meant it was a key target for the German Luftwaffe in WW2, and it became one the most heavily bombed areas outside London.

Across Merseyside 4,000 civilians were killed, 10,000 homes destroyed and 70,000 people were made homeless during air raids, and major landmarks, like Lewis’s, the Bluecoat Chambers and Walton Prison were hit.

The May Blitz of 1941 was the worst period when, from May 1, explosives rained down for eight successive nights, the worst being Saturday, May 3 into Sunday, May 4, when 298 enemy aircraft dropped around 363 tonnes of high explosives and 50,000 incendiary bombs.

When then Prime Minister Winston Churchill visited he said: “I see the damage done by the enemy attacks but I also see the spirit of an unconquered people.”

And that spirit is still here today – along with many buildings which survived the savage attacks of WWII, like these: The iconic building, St Luke’s Church – the ‘bombed out church’ – on Renshaw Street, suffered catastrophic damage during the May Blitz of 1941, leaving only its external masonry standing. The site lay derelict for more than 60 years. before being cleared and transformed by a series of cultural events, reopening the space to the public.

It’s now become an established venue for theatre, dance, classical and world music, visual art, cinema, and more, and stands as a testament to community spirit and a memorial to the Liverpool Blitz. 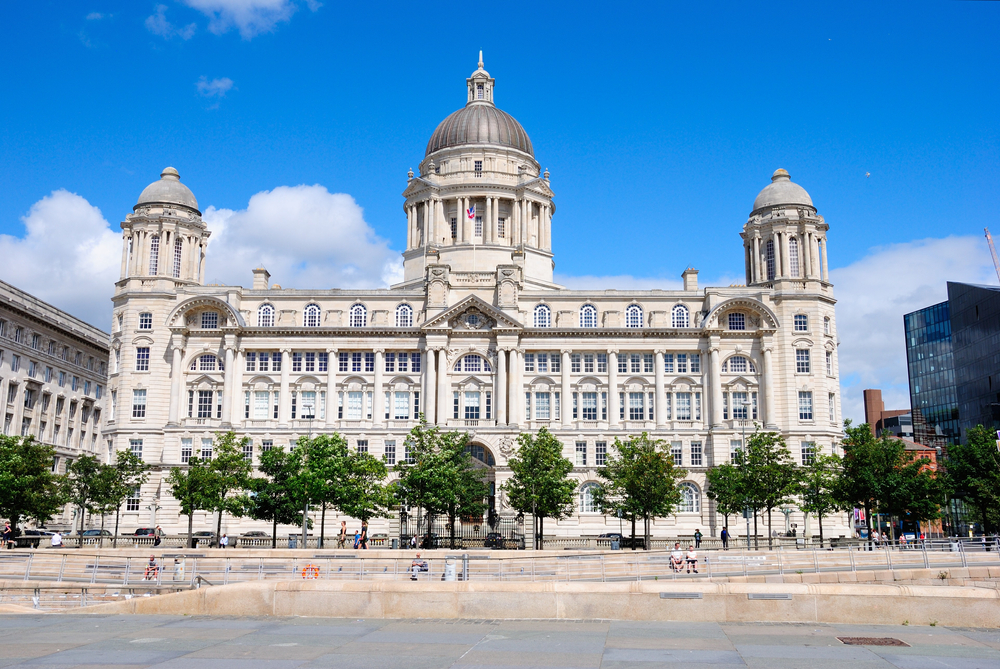 A heavy bomb exploded in the basement on the eastern side of the building in May 1941. The damage from the explosion was significant with the eastern wing being seriously damaged by fire, but the building’s structural integrity meant that much of the building could be re-occupied with only temporary repairs. After the war the building was fully restored, with the cost of restoration exceeding the original construction costs. 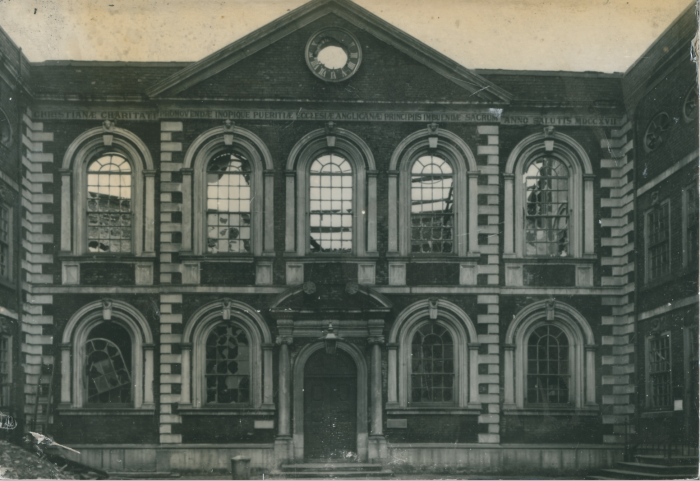 During the May 3, 1941, attack the concert hall of the former school and its adjoining rooms were damaged by an incendiary bomb. The next night, the rear wing was also destroyed by a bomb blast..

The building was restored in 1951, and the following year it received Grade I listed status.  Since then, the famous building has become a centre for the arts, and a base for small independent businesses. 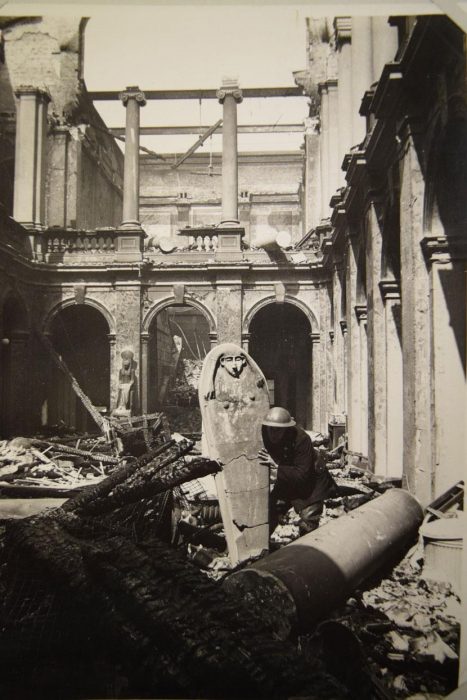 During the night of May 3, a massive high explosive bomb landed on the roof of the Central Library in William Brown Street, burying staff under the wreckage and, as fire began to take hold, spreading to the World Museum. Flames tore through the museum, gutting it from top to bottom, and destroying many of its collections (although much had been removed to less vulnerable locations). Repairing and rebuilding began in the 1960s.

The former home of The White Star Line shipping company – also known affectionately as the Streaky Bacon Building – Albion House, survived after a bomb devastated St James Street and other buildings in The Strand. In one photograph taken by Liverpool City Police in 1941 it can just be seen behind a smouldering pile of rubble.

Our Lady and St Nicholas’s Church 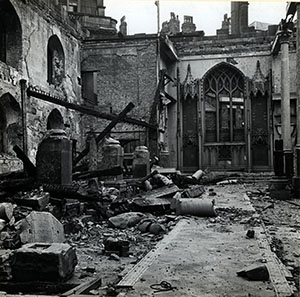 Liverpool’s Parish Church was struck on December 21, 1940. The main body of the church was destroyed by fire, and it was rebuilt in 1949. Today, the gardens provide a home for a bronze memorial by sculptor Tom Murphy which sees a mother clutching a baby while trying to encourage her son to escape down a staircase to a safer place; and a boy playing with an aeroplane lost in the excitement of war. The aeroplane held by the small boy can be seen both as an instrument of destruction, or as a cross in remembrance of those who sacrificed their lives during the Blitz. 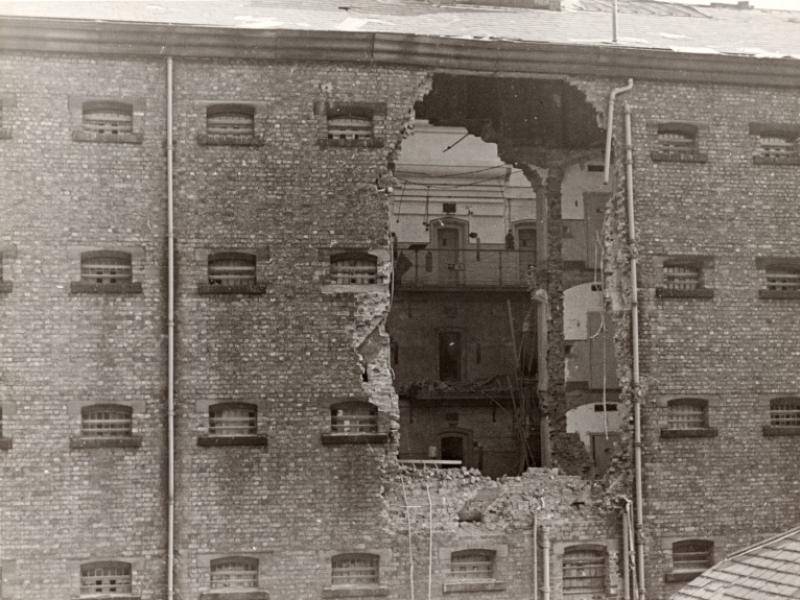 On September 18, 1940, 22 inmates at Walton Jail were killed when high-explosive bombs demolished a wing of the prison. 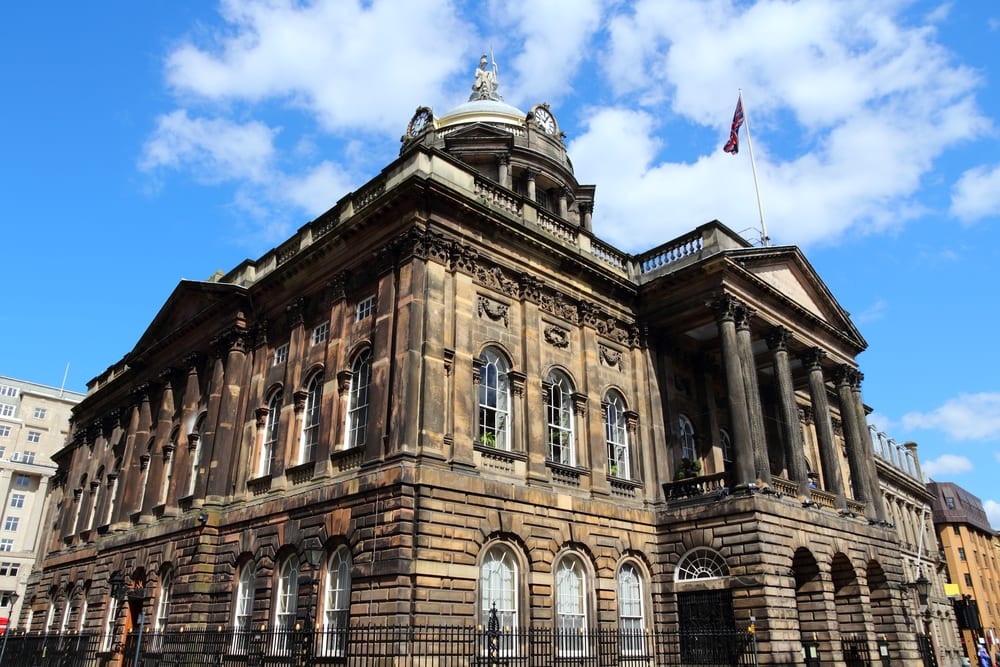 Part of the building was damaged in the blitz of 1941 and restored after the end of the Second World War. Further restoration was carried out between 1993 and 1995. Between 2014 and 2015 the exterior of the building was renovated as part of a £400,000 project, repairing damage caused by shrapnel from exploding incendiary bombs which punctured its sandstone walls and earlier repairs which had badly deteriorated.

St. Georges Hall was firebombed just before Christmas 1940. Part of the building and the organ were damaged but the neo-classical building was saved from more serious injury by the great work of the Civil Defence and the Auxiliary Fire Service. 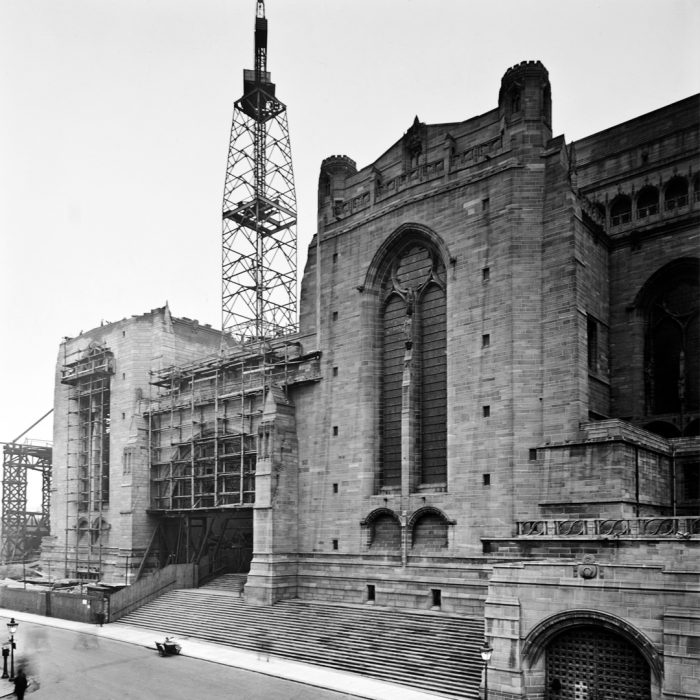 In May ’41, Liverpool Cathedral was hit by a high explosive bomb which pierced the roof of the south-east transept before being deflected by an inner brick wall and exploding mid-air, damaging many stained glass windows. Another landed on the front steps without exploding but incendiaries destroyed equipment in the contractor’s yard at the west end. 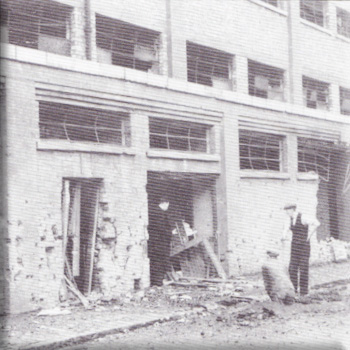 On the night of September 18-19, 1940, several bombs landed in the Everton and Walton area, including Gwladys Street, causing serious injury to nearby residents and also damaging the Gwladys Street Stand. In Bullens Road, a bomb dropped in the school yard opposite, badly damaging the exterior wall of the stand, and perforating the roof. A third bomb hit the outside of the practice ground (to the rear of the Park End Stand) demolishing the surrounding hoarding, and blowing out windows in houses in Goodison Avenue and Walton Lane.