Klopp: The man, and the 5 year plan - The Guide Liverpool
Contact Us Advertise with The Guide Our Video Services Follow us:

Klopp: The man, and the 5 year plan

The story of how Jurgen Klopp transformed the reds.

A little over 5 years ago in the confines of Fenway Sports Group offices a decision was made. A consensus was reached that a managerial change was required at Liverpool FC, the services of Brendan Rogers were no longer required and his successor was identified, enter stage left, a man from Germany’s Black Forest, and queue the beginning of a shiny new era at Anfield. Meet Jurgen Klopp.

Arriving to conduct his first press conference this unassuming man, the self ordained ‘normal one’, made a promise, he was the man who was going to transform the red men from perennial bridesmaids at the alter of the premier league to the main event, and he said it would happen in 5 years.

Many a Liverpool fan absorbed this information with a sense of trepidation, they had heard these promises before, seen their team come agonisingly close to ending their title winning hiatus under Rogers, memories of Crystal Palace and Gerrards slip at the forefront of their minds, but the ones who looked a little closer may have noticed the steely glint behind the smile of Klopp and the ingrained determination that told us he wasn’t in the business of false promises.

At the beginning it was not so spectacular, he was as any new manager is, trying to build a team in his own image, an unfaltering belief in his system, the geggenpress was coming, and the premier league would not know what had hit it. 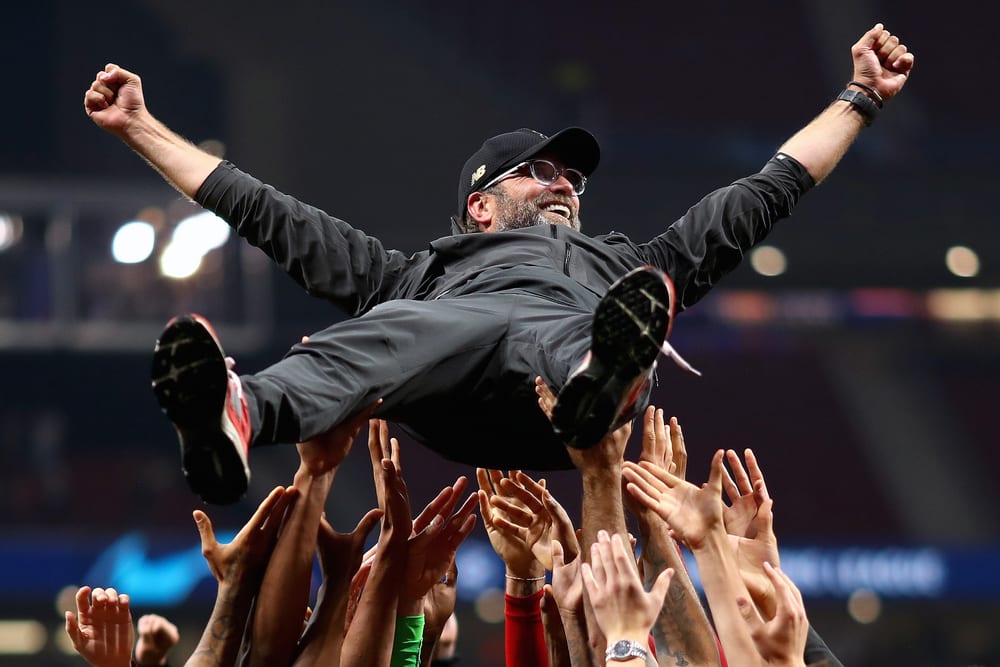 Jurgen favours what he calls ‘heavy metal football’, its relentless, it’s hardcore and its not for the faint hearted, his teams press with an intensity not seen on our shores before, they attack as a unit, something akin to a pod of Orcas hunting down a seal, while the implementation of such a tactic took a while to surface, when it did it was spectacular.

A manager lives or dies by recruitment and Klopp’s has been outstanding, Mane, Van Dijk, Alisson, Robertson to name but afew, also the promotion to the senior squad of Alexander Arnold and Jones shows that he is acutely aware of every facet of the clubs operation, he has fully immersed himself in the club, the city and the culture and the fans have devoured it hungrily.

A measure of a a boss is how he is thought of by his underlings, anyone who has watched Liverpool since the mans arrival will testify to the fact that his players play not just for the badge, the fans and the money, but for the gaffer as well, they would run through the proverbial brick wall for him and for that loyalty they have been rewarded with trophies.

The league title was returned to Anfield as promised as was the Champions League, club world cup and super cup, all delivered by the effervescent guy with the wide smile and quick quips, he is a man of principal and sticks to his with an unfaltering strength, the fans adore him, pets and pubs have been named after him and most of all there is more to come.

The 5 year plan was a great success, he has made good on his promise and the fans are thirsty for more, the unassuming, entirely normal guy from the black forest looks like he is the man to deliver it, if the last 5 years are anything to go by it’s certainly going to be a journey worth watching.