LFC return home to a city-wide Champions League Victory Parade like no other - The Guide Liverpool
Contact Us Advertise with The Guide Our Video Services Follow us: 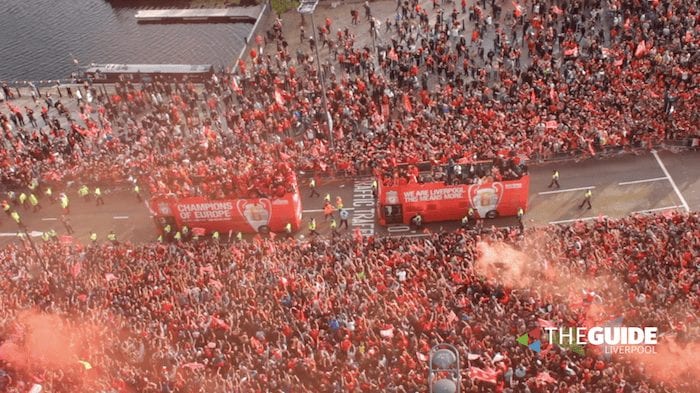 More than 750,000 people lined the city streets to welcome the Champions of Europe back home.

Fans lined the 14 mile victory parade route from Allerton Road to The Strand from early doors, despite the parade not starting until 4pm. With flags, cardboard cut out of the players and of course Klopp, balloons, hooters, scarfs and every perceivable Liverpool Football Club shirt, the city resembled a sea of red.

The scenes at Childwall Fiveways roundabout, The Jolly Miller, Islington and then the big finale on The Strand, were nothing short of amazing. With chants of Allez Allez Allez, fireworks and flares, the LFC open top bus was bouncing as much as the fans, with Jurgen Klopp looking like he was having the time of his life.

With more than three quarters of a million people in the city, the atmosphere along the route, in bars, pubs, restaurants and out in the public spaces, right across Liverpool was unreal. Families, mates, visitors from so many different countries – all coming together to celebrate this massive sporting achievement that will go down in history.

We want to say a huge congratulations to everyone at LFC, Liverpool City Council, all the stewards, clean up teams and volunteers who have worked incredibly hard to show our city in the best possible way. United in celebration.