Sir Ringo Starr shares his advice for staying fit and healthy as he turns 79 - The Guide Liverpool
Contact Us Advertise with The Guide Our Video Services Follow us: 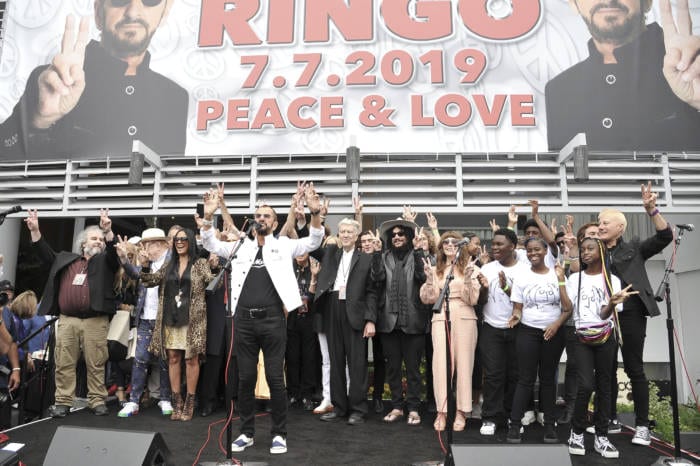 The former Beatle marked his birthday with a Peace & Love event in Los Angeles.

Sir Ringo Starr has celebrated his 79th birthday, and offered his advice for staying fit and healthy – “don’t eat a lot of crap”.

The former Beatle marked the milestone with his annual Peace & Love event, this year held in Los Angeles.

Sir Ringo, who was accompanied by his wife of 38 years, Barbara Bach, was asked his secret for maintaining his youthful appearance as he approached 80 years old.

He said: “There is no secret, you just don’t eat a lot of crap, eat a lot of broccoli and you work out and you enjoy life.”

Asked what his birthday wish was, Starr said: “More peace and love, as usual.”

Sir Ringo has held the Peace & Love ceremony on his birthday each year since 2008 and asks fans around the world to chant the slogan to “generate a wave of positivity”.

Sir Ringo, who was born Richard Starkey in Liverpool in 1940, wore his trademark sunglasses along with a white denim jacket and black trousers as he addressed fans outside the Capitol Records Building in Hollywood on Sunday.

The surrealist filmmaker David Lynch was among the celebrity guests, as well as musician Don Was.

Sir Ringo said: “I’m truly grateful for the people who put this together and all the visitors for the support.”

As he started the countdown to the “magical moment”, Sir Ringo joked: “I think we’ll go by my watch, it’s probably the most expensive.”

As the clock struck midday in Los Angeles, Sir Ringo led a chorus of “peace and love”, before celebrating by throwing white wristbands bearing the slogan into the audience.

He also blew out the candles on a cake before being serenaded with a rendition of Happy Birthday.

Happy Birthday to the best drummer in the world. Have a great one @ringostarrmusic. Love, Paul pic.twitter.com/fPr30f4M0M

Earlier, Sir Ringo was praised as the “best drummer in the world”, as his former Beatles bandmate Sir Paul McCartney wished him a happy birthday.

Sir Paul posted a picture on Twitter of the pair of them on stage together and wrote: “Happy Birthday to the best drummer in the world. Have a great one @ringostarrmusic.