Storm Eunice: People urged to stay home as extreme winds sweep across UK - The Guide Liverpool
Contact Us Advertise with The Guide Our Video Services Follow us:

People are being urged to stay at home for the day as one of the worst storms in a generations sweeps across the UK.

Schools, roads and businesses have shut, with major disruption to the travel network due to concerns over flying debris caused by gusts of up to 90mph because of Storm Eunice.

Homes have been left without power, while the Met Office issued two ultra rare “red” weather warnings – from 7am until midday along the coastline of Devon, Cornwall and Somerset as well as the south coast of Wales, and from 10am until 3pm over the East of England and London – due to the combination of high tides, strong winds and storm surge.

And weather watchers have been urged to stay away from the coastline, with Roy Stokes from the Environment Agency describing travelling to take pictures in such hazardous conditions as “probably the most stupid thing you can do”.

In the North West, the Met Office has reported that today very strong winds will continue with outbreaks of rain and hill snow. Wintry showers will follow as the storm clears, potentially falling to lower levels, with a maximum temperature of 8 °C.

Tonight across the North West, the Met Office is reporting that Wintry showers will continue through the evening and overnight. Snow may settle on higher ground and there will be remaining gales along coasts. It will feel cold with a widespread ground frost and some icy patches. Minimum temperature -1 °C.

A separate amber weather warning is also in place for gusts up to 80mph covering most of England from 5am to 9pm, as well as yellow warnings for snow in Scotland and Northern Ireland.

He told Sky News: “We are strongly encouraging people to take precautions and make sure they stay safe.”

The Met Office added that the dangerous weather phenomenon known as a sting jet – a small area of highly intense wind inside a storm – could form later on Friday.

“After the impacts from Storm Dudley for many on Wednesday, Storm Eunice will bring damaging gusts in what could be one of the most impactful storms to affect southern and central parts of the UK for a few years.”

The Met Office also took the unusual step of issuing a severe weather alert with National Highways for strong winds covering the whole of the country’s strategic road network from 6am to 6pm.

National Highways said high-sided vehicles and other “vulnerable” vehicles such as caravans and motorbikes could be blown over so should avoid bridges and viaducts. 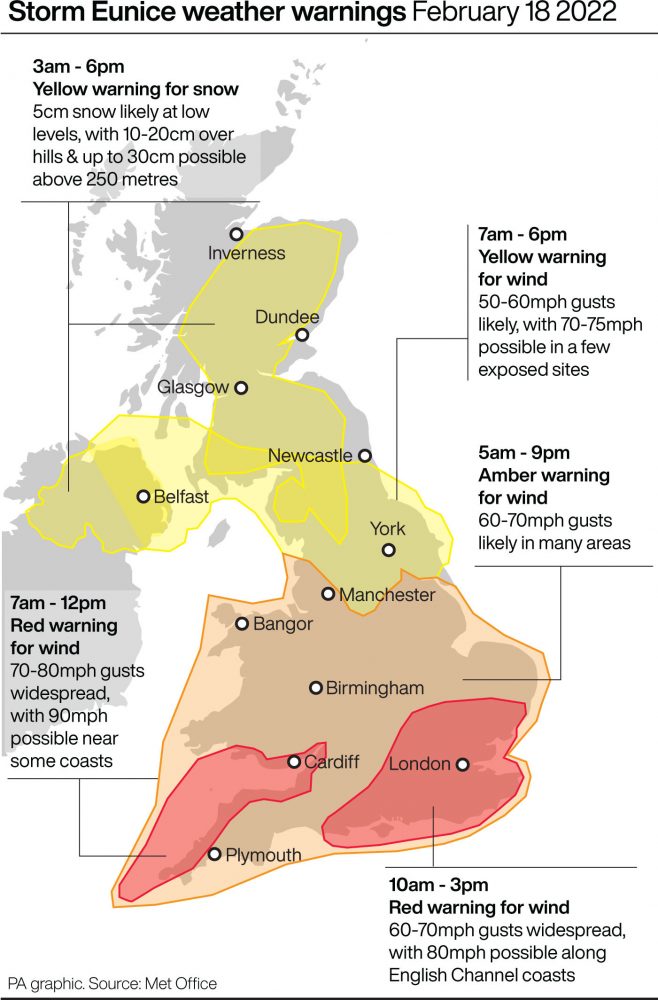 He said: “In high winds, there’s a particular risk to lorries, caravans and motorbikes so we’d advise drivers of these vehicles to slow down.”

Network Rail urged customers to avoid travelling on Friday, with many services either cancelled or delayed, and trains running at 50mph due to the increased risk of having to brake for debris on the track.

The main line through South Wales was also closed.

Major roads including the A66 cross-Pennine route and the M8 between Edinburgh and Glasgow have been partially closed due to high winds.

In the capital, Transport for London urged people to avoid non-essential travel on Friday.

A spokeswoman said: “We are also urging Londoners to please take care if they travel around the city.”

The Environment Agency has issued 10 severe flood warnings – eight along the Severn and two along the Wye – meaning there is a danger to life, as well as dozens of flood warnings and more than 100 flood alerts.

Western Power Distribution said more than 1,200 homes in Devon and Cornwall – where Storm Eunice hit on Friday morning – are out of power.

ESB said more than 6,000 people were without power due in the south of Ireland, predominantly in Cork and Kerry, on Friday morning.

Snow has already started to fall in pockets of Scotland, North Yorkshire and County Durham, but is expected to get much heavier and widespread. 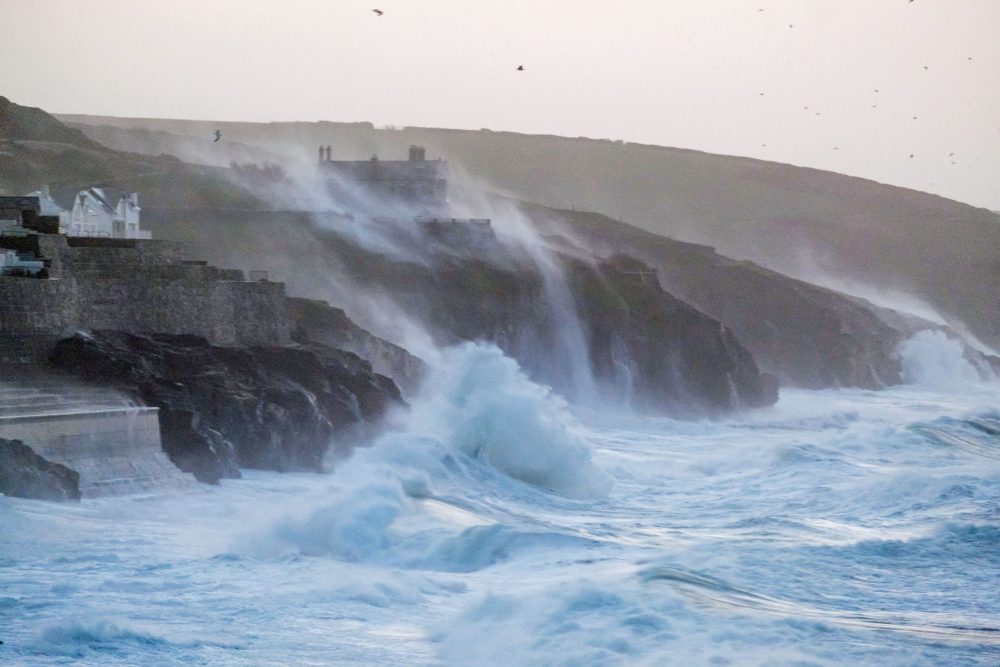 “The whole of the country will be affected by the extremely strong and damaging winds, which will cause significant disruption.

“People will see significant delays to travel and power cuts, so you should avoid travelling if you can and stay at home when winds reach the highest speeds.

Several red warnings were issued in late February and early March 2018 during the so-called “Beast from the East”, the storm that brought widespread heavy snow and freezing temperatures to many parts of the UK.