The Addams Family, A Musical Comedy takes to the stage at Liverpool Empire from Tuesday 8 March until Saturday 12 March

Wednesday Addams, the ultimate princess of darkness, has grown up and has a shocking secret that only Gomez knows; she’s fallen in love with a sweet, smart young man from a respectable family! Now, Gomez Addams must do something he’s never done before — keep a secret from his beloved wife, Morticia.

Everything will change for the whole family on the fateful night they host a dinner for Wednesday’s “normal” boyfriend and his parents.  All the usual clan are present – Uncle Fester, Lurch, Pugsley et al.

Joanne Clifton who plays Morticia and Cameron Blakely who will take on the role of Gomez have been chatting with us about what you can expect from the show:

What’s in store for audiences who come see The Addams Family?

Cameron: A lot of quirkiness, a lot of laughs and a lot of miscommunication. In a way it’s like a dark farce. And I think everyone needs a bit of escapism at the moment, after the year and a half we’ve all had, and this show really provides that.

Joanne: It’s a feel-good, fun, laugh-out loud family show. Audiences know the characters, they know the world of The Addams Family from the TV show and films but there are some surprises in store. And it’s really, really funny. The feel-good factor is something everyone is craving after what everyone’s been through. 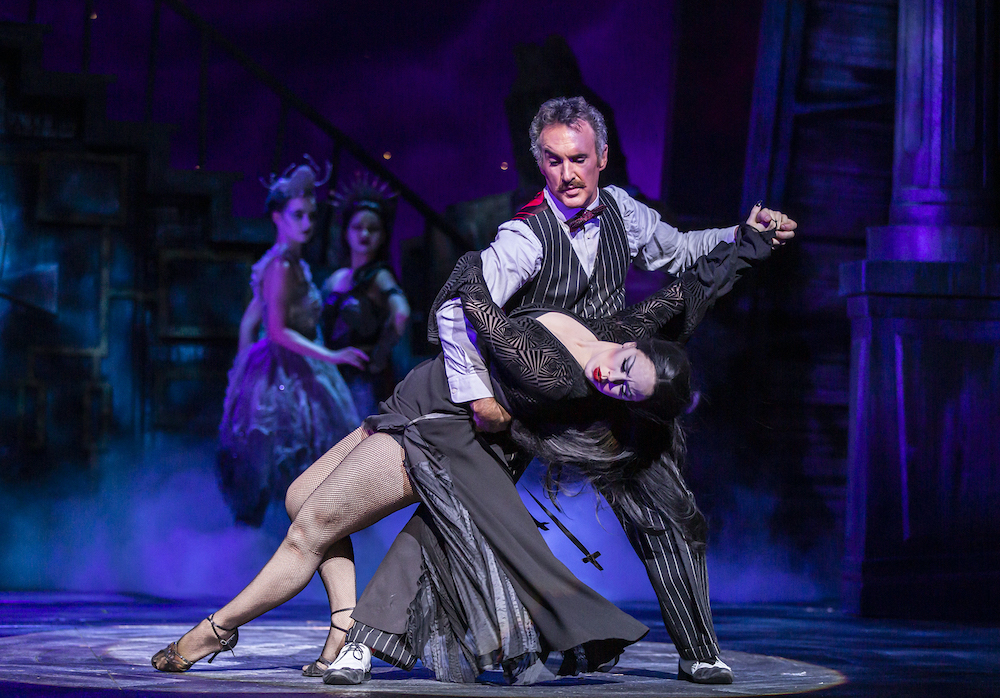 How did you keep yourselves busy during the last year and a half?

Joanne: [Laughs] How long have you got? Me, Katya Jones from Strictly and my friend Sasha Latoya created an online motivational course called The Beyond Lockdown Empire, which went so well we turned it into a book. I continued working on a musical I’m writing with Ben Adams called Bloody Nora. I also did dance classes on Zoom, podcasts, lots of things – I kept myself really busy because I’m not good at taking time off.

Cameron: I ended up using my driving skills to do Argos deliveries for a while, which was jolly good fun. I really enjoy driving so I thought ‘How can I at least try and make a bit of money out of it?’ I did that and it was very enjoyable, just keeping active and doing something.

What are you most looking forward to about being back on stage?

Cameron: Just the thrill of doing what you’re trained to do, your main vocation, and to connect with a crowd again – knowing that you’re hopefully making people happy and making them laugh. It’s also going to be great seeing other parts of the country because we were all sort of in enforced prison mode for such a long time.

Joanne: I can’t wait for the buzz of having a live audience again. I love film acting as well but the live aspect of theatre for me is so thrilling – the fact that anything could go wrong at any point, or that someone could do something different on stage and you have to react to it, or how audiences react to different things in different parts of the country. 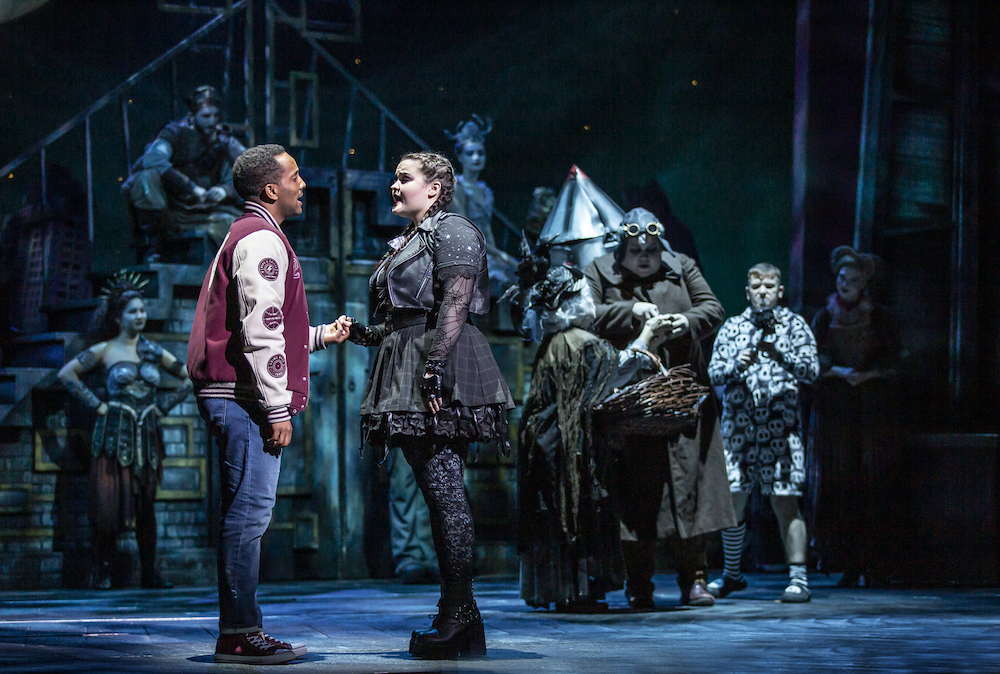 Ahmed Hamad as Lucas Beineke, Kingsley Morton as Wednesday Addams with the cast

Morticia and Gomez are such iconic characters. How do you put your own stamp on them?

Joanne: When I get a job I do watch the films or any kind of footage from the show twice maximum, then I don’t watch it anymore. I get a feel for the character, then I leave it because I want to do my own version of it. I did Thoroughly Modern Millie but I’m never going to be Julie Andrews, I did The Rocky Horror Show but I’m never going to be Susan Sarandon, and I’m not going to be Carolyn Jones from The Addams Family TV shows or Anjelica Huston from the movies.

Cameron: I was always a great fan of Raoul Julia, who played Gomez in the movies. I wanted to make him quite Spanish, as he was in the films, and to make him like a matinee idol romantic type. It’s such a great role because it has everything. And the way the composer has written the score it’s different for each character, so Gomez gets all the sort of Latin music – very melodramatic and romantic with a Spanish feel to it.

Do you have anything in common with them?

Cameron: I do secretly quite like growing a moustache in a retro 1970s way. I got quite attached to it when I first did the show in 2017 and didn’t get rid of it for about a year afterwards. With Gomez’s romanticism, I’m quite similar to him in that sense, as am I when it comes to his passion.

Joanne: I am a Scorpio so I could maybe have a dark side but it doesn’t come out very often. The main thing we have in common is a fierce love and protection of family, but I don’t think she likes to sit at home playing with Slime or doing jigsaw puzzles in her spare time, whereas I do.

It’s full of great musical numbers. Do you have a favourite to perform?

Joanne: Death Around the Corner. Morticia is so dark and Gothic and she has this big Broadway number about death. I think it’s fabulous.

Cameron: There’s one called Happy/Sad, which is a lovely reflective song that Gomez sings to his daughter. It always make me think of my daughter Noelle, who turned eight in August. When I first did the show I remember I got this big lump in my throat and really struggled not to cry. 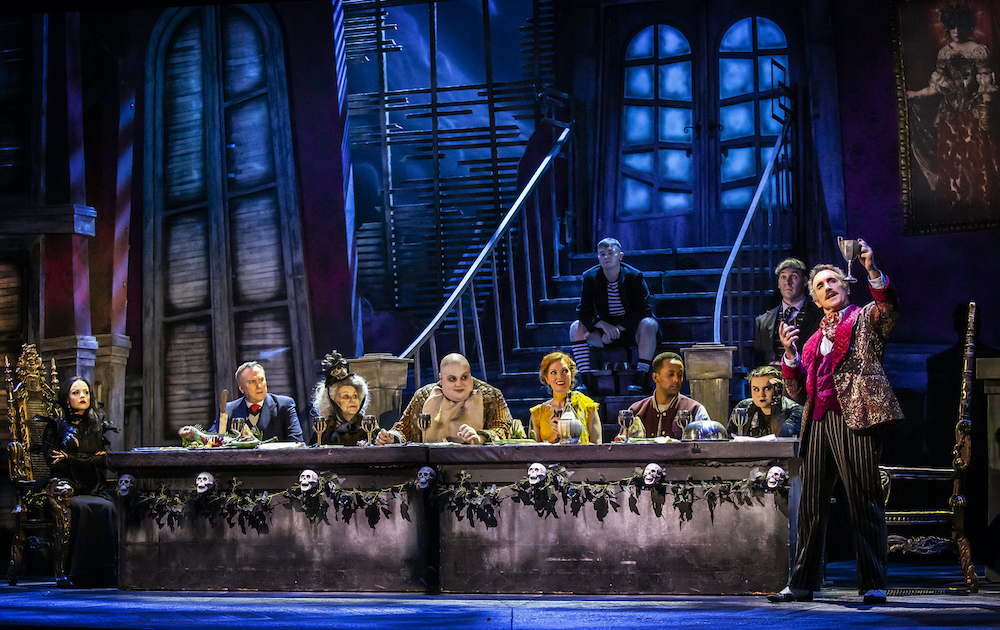 The cast of THE ADDAMS FAMILY. Credit Pamela Raith

Can you recall when you first encountered The Addams Family?

Cameron: I think it was the first movie, starring Raoul Julia and Anjelica Huston. I’d grown up knowing about The Addams Family but I was more the age group of The Munsters.

Joanne: Me and my brother Kevin used to watch it on TV when we were kids and we loved the movies. I’m a big fan and I was so happy when I got this job I even did a painting of Morticia.

It began life as a cartoon in the 1930s, became a TV show in the 1960s, a film franchise in the 1990s and a musical in the noughties. Why do you think it has endured for so long?

Joanne: It’s fun to see this family who are not the happy-go-lucky Disneyworld-ish model American family. They’re not typical in any way and it’s really fun to watch how they behave compared to your average TV or movie family.

Cameron: People inherently like Halloween and the macabre, plus there’s this mishmash of very odd characters in the same family. There’s also the darkness and the fun the Addams family have around graveyards and moonlight. I think viewers are fascinated by the juxtaposition of light and darkness and how it’s completely flipped. It’s just fascinating and there’s so much dark humour you can get out of that.

What’s the one thing you couldn’t be on the road without?

Cameron: Because I have to stay in shape for the tango number it would have to be my resistance bands. There’s a five-minute tango at the end of the show looming, so I’ve started training and running again – which my body hated at first but once all the blisters have settled down I’ll be fine…

Joanne: I take a jigsaw puzzle to every venue. If I manage to finish it I give it to one of the dressers if they want it. If I don’t finish it I dismantle it and take it to the next venue to have another go at it. 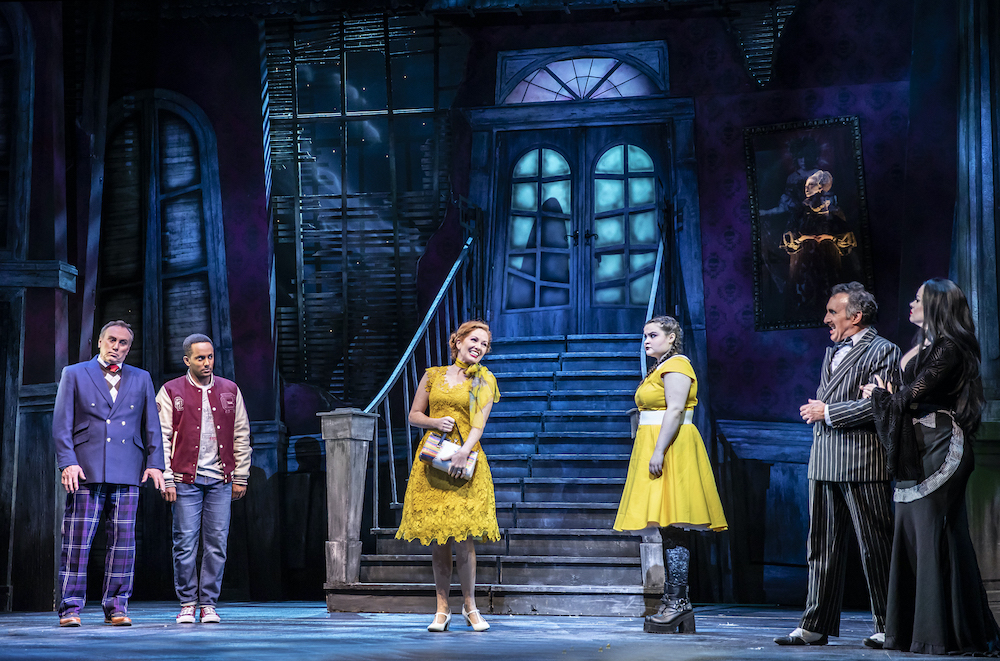 The tour calls at the Liverpool Empire. Does it have any significance for you?

Cameron: I’ve been there once and I love it because there’s a sort of retro feel to the theatre. I did a recording there of something, which was only for a day, so I’m looking forward to going back and performing properly. I do remember thinking Liverpool was very nice and I have some very lovely Liverpudlian friends, so I go by that, like ‘If you’re lovely then I’m sure your city is lovely as well’.

Joanne: You always get such raucous audiences in Liverpool, and I mean that in the best possible way. They’re so up for a good time and Liverpool itself is such a lively place to visit. There’s always so much going on.

Book your tickets for The Addams Family at Liverpool Empire HERE.