The Premier League is back, and so are The Football Pools!

After 100 match-free days, football’s finally coming back today with a new look – and so is the nation’s oldest and best-loved football betting game.

Fixtures will be behind closed doors, but fans will still be able to get involved and feel the thrill of every goal going in by playing along with The Football Pools.

Now, as well as £3 Million up for grabs this Saturday and cash prizes easier to win than the National Lottery, The Football Pools has a new look website, and a lucky dip option for those who prefer to leave their picks to luck, so there are even more ways to win.

Launching to celebrate football’s much-awaited return, a creative campaign will feature football freestyler and influencer John Farnworth showing off the skills that have made him a four-time Guinness World Record holder.

The Football Pools – still based in Liverpool where it began back in 1923 – is a great British tradition and it’s been a major part of matchday for generations.

Players have been scoring big cash prizes for almost a century, marking crosses on coupons and waiting nervously for the final whistle to reveal their results.

It’s made millionaires and headlines – who could forget its most famous winner Viv Nicholson’s pledge to “Spend, Spend, Spend” back in 1961 when she scooped £152,319, the equivalent to more than £3.5 Million today?

There are lots of ways you can keep the Liverpool music playing whilst gigs are off.

Now with a monthly online subscription option alongside the traditional paper coupon, players will never miss a game or the chance to win the £3 Million this Saturday and join the Pools millionaires list.

They can qualify for a monthly prize draw with cash prizes up to £100,000 and when they sign up they’ll get four games FREE. There are prizes to be won on every game (at least twice per week) and subscription makes it simple to manage and control how much is staked because we know how important it is to gamble safely.

The Football Pools is part of Britain’s sporting heritage. They’ve been there for long shorts, very short shorts and curly perms, the Special One and the Normal One, and lots of loyal staff have seen it all – Rose Eccles in Customer Services has been with The Football Pools since before England’s 1966 World Cup win! 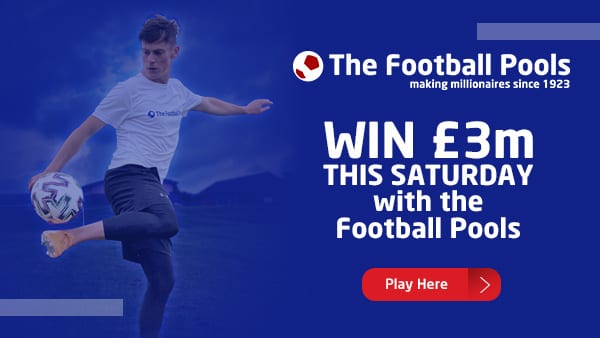 “With football returning after the virus shutdown and the title race on again, the company is planning for its own comeback and taking the opportunity to build on its illustrious history.

“We are the world’s oldest football gaming company, and for thousands of people, weekends wouldn’t be complete without doing their Football Pools. But the game is constantly evolving and we need to evolve too to ensure we are well-placed as a market leader in sports and online betting for many years to come.

“We want to make The Football Pools even easier and more exciting to play than ever before and we are delighted to have such a well-respected talent in the sport, John Farnworth, partnering with us as we go forward,” said Stevens.

Over the past 97 years, The Football Pools has paid out a staggering £3.2billion to amateur pundits across the country. Subscribe to the Pools and when matchday returns you could be the next big score draw winner.

Sign up now and be in with a chance of winning up to £3 million.