What happens next? Day by day after the Queen’s death - The Guide Liverpool
Contact Us Advertise with The Guide Our Video Services Follow us:

What happens next? Day by day after the Queen’s death

The Queen has died and the Prince of Wales is now King.

Here is the day-by-day account of what is expected to happen next, leading up to the Queen’s funeral in around 11 days’ time.

Today would traditionally have been D-Day or D+0 in the plans for the aftermath of the Queen’s death, codenamed London Bridge.

But the announcement has come late in the day – at 6.31pm on Thursday September 8 – meaning plans have been shifted a day to allow the complex arrangements to be put in place, meaning D+0 will be considered Friday.

The new King had dashed to the Queen’s bedside.

Charles was joined by the monarch’s other children the Princess Royal, the Duke of York and the Earl of Wessex, and the Duke of Cambridge, now heir to the throne, with the Duke of Sussex also travelling there.

Also at Balmoral are Camilla – the new Queen – and the Countess of Wessex.

The King and Camilla – now the Queen – will remain at Balmoral this evening and will return to London on Friday.

The following is expected to take place on Friday – D+0. But concrete plans are yet to be confirmed by Buckingham Palace.

– Audience with the PM – Despite his grief, duty calls for new sovereign Charles and his first audience as monarch with Prime Minister Liz Truss is expected to happen as soon as practically possible.

– Confirming funeral plans – Charles will meet the Earl Marshal – the Duke of Norfolk – who is in charge of the accession and the Queen’s funeral, to approve the carefully choreographed schedule for the coming days.

The arrangements – codenamed London Bridge – have long been planned in consultation with the Government.

They will incorporate Operation Unicorn, the contingency plans for the death of the Queen in Scotland.

During the coronavirus pandemic, the Government and the Royal Household prepared a “London minus” version of the London Bridge plans in case it was needed – which is now unlikely – with all the elements but with the involvement of fewer people.

– Court mourning – Charles will decide on the length of court or royal mourning for members of the royal family and royal households. It is expected to last a month.

– National mourning – The Government will confirm the length of national mourning, which is likely to be around 12 to 13 days, from now up to the day after the Queen’s funeral.

They will also announce that the funeral day will be a public holiday in the form of a Day of National Mourning.

– Flags – Union flags on royal buildings will fly at half-mast.

The Royal Standard never flies half-mast. It represents the Sovereign and the United Kingdom, and is a symbol of the continuation of the monarchy.

If the new King is in residence at a royal palace or castle, the Royal Standard will fly there full-mast as is the tradition.

The Union flag does not fly there at the same time.

The Union flag will also be flying half-mast over the Houses of Parliament. The Department for Digital, Culture, Media and Sport is in charge of arrangements for lowering flags on government buildings.

Downing Street reportedly expressed concern in the past that the Government would face a wave of public anger if it did not lower its flags within 10 minutes of the announcement of the Queen’s death.

– Bells and gun salutes – Bells will toll at Westminster Abbey, St Paul’s Cathedral and Windsor Castle, and gun salutes – one round for every year of the Queen’s life – will be fired in Hyde Park and at other stations.

Floodlighting at royal residences will be turned off, and the public will begin to leave flowers as tributes from around the world pour in.

He will pay tribute to the Queen and pledge his duty to his service as the new sovereign.

– Service at St Paul’s Cathedral – The Prime Minister and senior ministers will attend a public service of remembrance at St Paul’s in central London, with the event planned to appear as if impromptu. 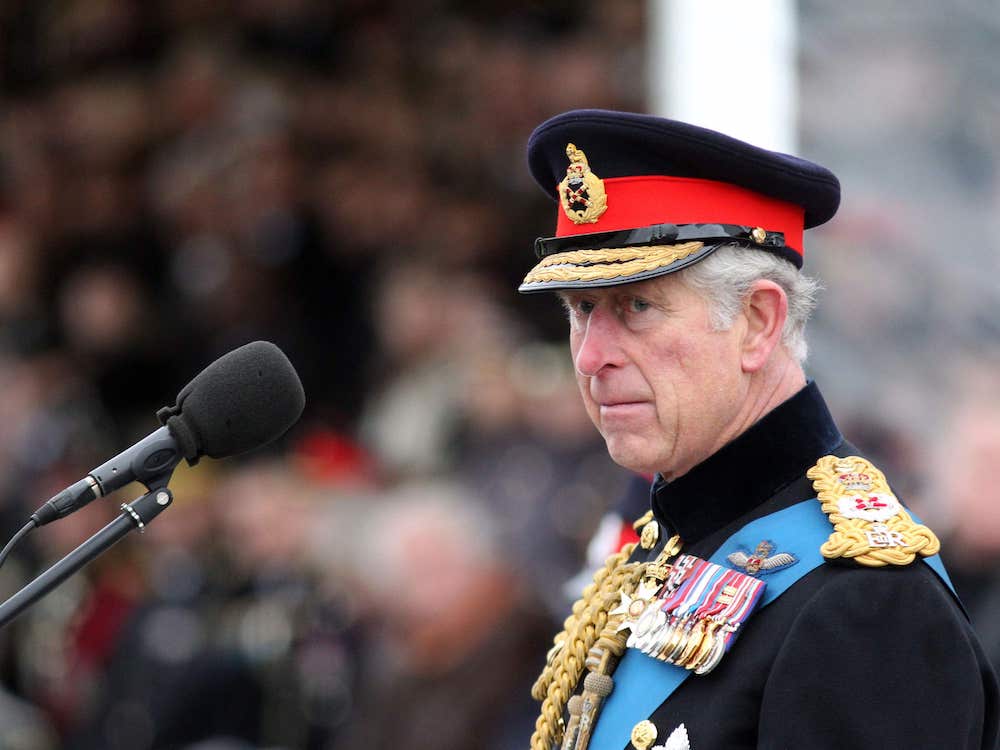 At 10am on the day after the Queen’s death, the Accession Council usually meets at St James’s Palace in London to formally proclaim Charles as the new sovereign.

First, the Privy Council gathers without the King to proclaim the new monarch and arrange business relating to the proclamation.

Then Charles holds his first Privy Council, accompanied by Camilla – the new Queen – and William who are also Privy Counsellors, and makes his personal declaration and oath.

The first public proclamation of the new sovereign is read in the open air from the Friary Court balcony at St James’s Palace by the Garter King of Arms.

Proclamations are made around the city and across the country.

Union flags go back up to full-mast at 1pm and remain there for 24 hours to coincide with the proclamations before returning to half-mast.

Charles will also hold an audience with the Prime Minister and the Cabinet.

The Queen’s coffin is expected to be taken by road to the Palace of Holyroodhouse in Edinburgh.

Proclamations will be read in the Scottish, Welsh and Northern Ireland devolved parliaments in Edinburgh, Cardiff and Belfast.

Procession is expected along Royal Mile to St Giles’ Cathedral. Service and the Vigil of the Princes by members of the royal family.

The public may get the chance to file past the Queen’s coffin at a mini lying in state in St Giles’.

The House of Commons and the House of Lords are expected to come together in Westminster for a Motion of Condolence, which the King could attend.

After leaving England and visiting Scotland, Charles will at some stage travel to the other countries of the UK – Wales and Northern Ireland – known as Operation Spring Tide.

A rehearsal for the procession of the coffin from Buckingham Palace to the Palace of Westminster takes place.

The Queen’s lying in state is expected to begin in Westminster Hall – Operation Marquee – following a ceremonial procession through London. It will last four full days.

The Archbishop of Canterbury will conduct a short service following the coffin’s arrival.

Hundreds of thousands of people will file past the coffin on its catafalque and pay their respects, just as they did for the Queen Mother’s lying in state in 2002.

The management of the queues outside is Operation Feather.

During the Covid-19 crisis, plans included the possibility of the introduction of timed ticketing for those wanting to attend.

Senior royals are also expected to pay their own moving tribute, standing guard at some stage around the coffin – the tradition known as the Vigil of the Princes. 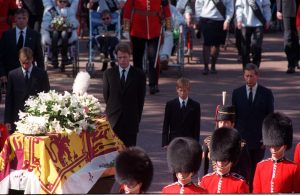 The sons of Diana, Princess of Wales, her brother and her former husband, the Prince of Wales, somberly walk behind her coffin as the funeral procession approaches Westminster Abbey this morning. From left to right: Prince William, Earl Spencer, Prince Harry and Prince Charles. Photo by Adam Butler/PA 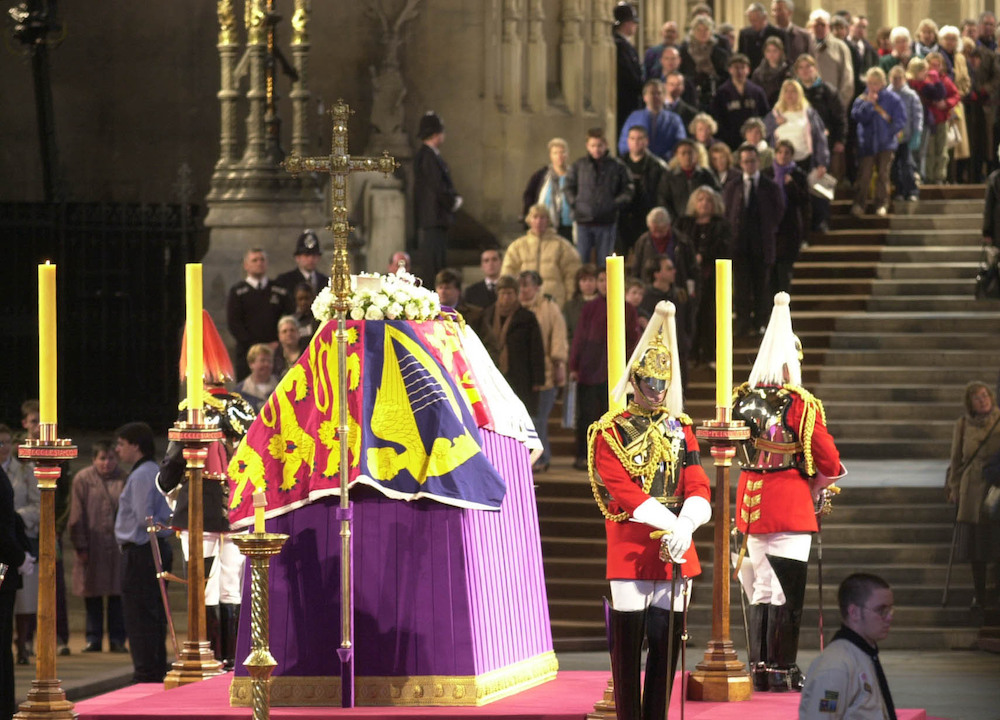 People file past the coffin of Britain’s Queen Elizabeth The Queen Mother, in Westminster Hall, London, where she is lying in state before her funeral.

Lying in state continues and a rehearsal is likely to take place for the state funeral procession.

Lying in state continues, ending on D+9. Heads of state begin to arrive for the funeral.

The original plans are for the Queen’s coffin to process on a gun carriage to the abbey, pulled by naval ratings – sailors – using ropes rather than horses.

Senior members of the family are expected to poignantly follow behind – just like they did for the funeral of Diana, Princess of Wales and the Duke of Edinburgh.

The military will line the streets and also join the procession.

Heads of state, prime ministers and presidents, European royals and key figures from public life will be invited to gather in the abbey, which can hold a congregation of 2,000. 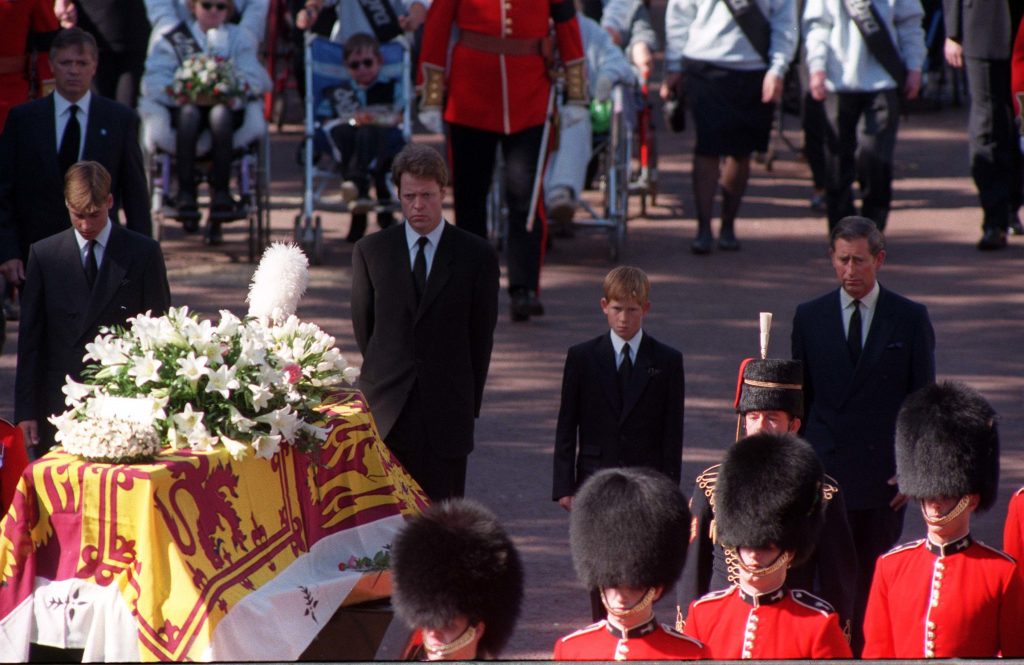 The sons of Diana, Princess of Wales, her brother and her former husband, the Prince of Wales, somberly walk behind her coffin as the funeral procession approaches Westminster Abbey this morning. From left to right: Prince William, Earl Spencer, Prince Harry and Prince Charles. Photo by Adam Butler/PA

The service will be televised, and a national two minutes’ silence is expected to be held.

The same day as the funeral, the Queen’s coffin will be taken to St George’s Chapel at Windsor Castle for a televised committal service.

Later in the evening, there will be a private interment service with senior members of the royal family.

The Queen’s final resting place will be the King George VI memorial chapel, an annex to the main chapel – where her mother and father were buried, along with the ashes of her sister, Princess Margaret.

Philip’s coffin will move from the Royal Vault to the memorial chapel to join the Queen’s.

Leave your tribute to Queen Elizabeth ll on our Twitter page HERE.