Wirral nurse who lost her leg in crash is learning to walk again with video game therapy - The Guide Liverpool
Contact Us Advertise with The Guide Our Video Services Follow us:

A Wirral nurse who lost a leg after being hit by a car as she carried her son on a family shopping trip is learning to walk again with the help of video game therapy.

Ruby Flanagan from Wallasey managed to throw baby Leon to safety, but her own injuries were so severe that her right leg had to be amputated, her left leg needed extensive reconstruction and her pelvis was shattered.

The 25-year-old spent three months in Aintree Hospital after the accident in August 2021 and underwent 11 operations before being transferred to STEPS rehabilitation centre in Sheffield.

It’s here that, for the past six months, Ruby has been gaming again for the first time since she was a teenager.

As part of the treatment to give her back her independence, and get her used to the prosthetic leg she now has, Ruby has been having weekly MindPod sessions. 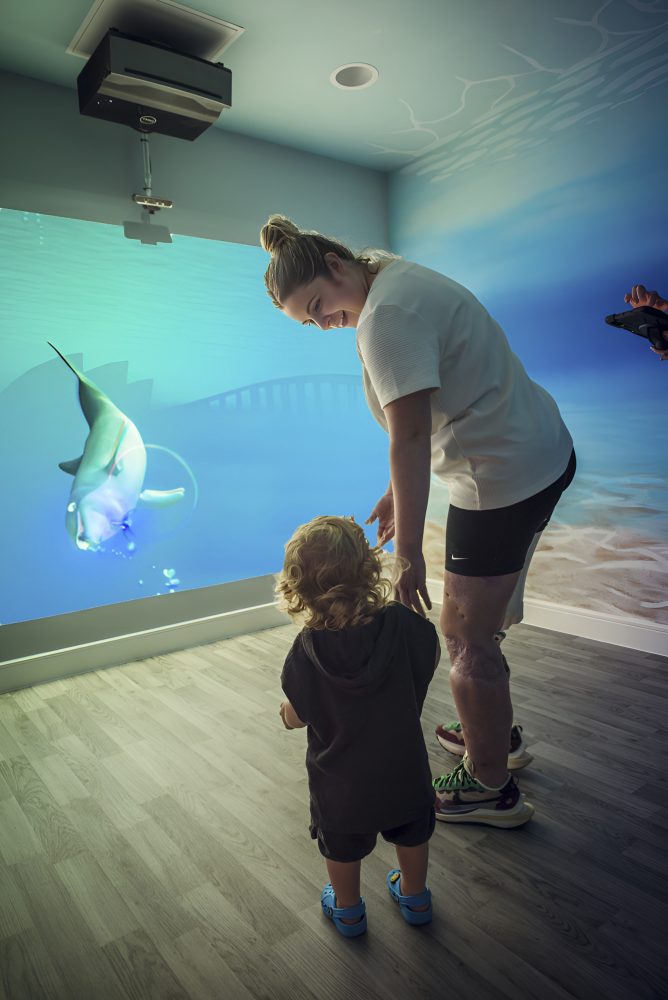 Ruby in the MindPod with son Leon

The neuro-animation therapy, based on computer game technology, was created by Swiss-based MindMaze with technology developed in Johns Hopkins University School in Baltimore, USA. STEPS in Sheffield is one of two rehabilitation centres in the UK to offer MindPod, along with Royal Buckinghamshire Hospital.

The therapy uses dolphins which are known for their intelligence, playfulness and expressive movements.

Designed to help patients recover their motor skills and cognitive function, in Ruby’s case it improves her core strength, balance, and coordination.

Motion sensors allow her to control Bandit, an animated dolphin, in movements which she can then apply to everyday life.

Chasing fish up high in the sea translates to reaching for a wall cupboard in the kitchen, down low replicates bending to pick up one of Leon’s toys.

“You stand in front of the screen, it tracks every move you make and the dolphin responds to that,” explains Ruby.

“My goal at first was just to stand and do it for at least 10 minutes, then 15, then 30, and eventually for a full hour-long session. It doesn’t feel like any other kind of therapy, it’s such a relaxed vibe and there’s something really soothing about dolphins. You’re thinking about the game but then before you know it you’ve done a workout on your arms and you’ve been standing for an hour.

“You can complete over 100 different levels, and each one allows you to do more so it’s like a platform game where you keep progressing. You think, next week I’ll see if I can try the next level so you’ve always got something to aim towards.” 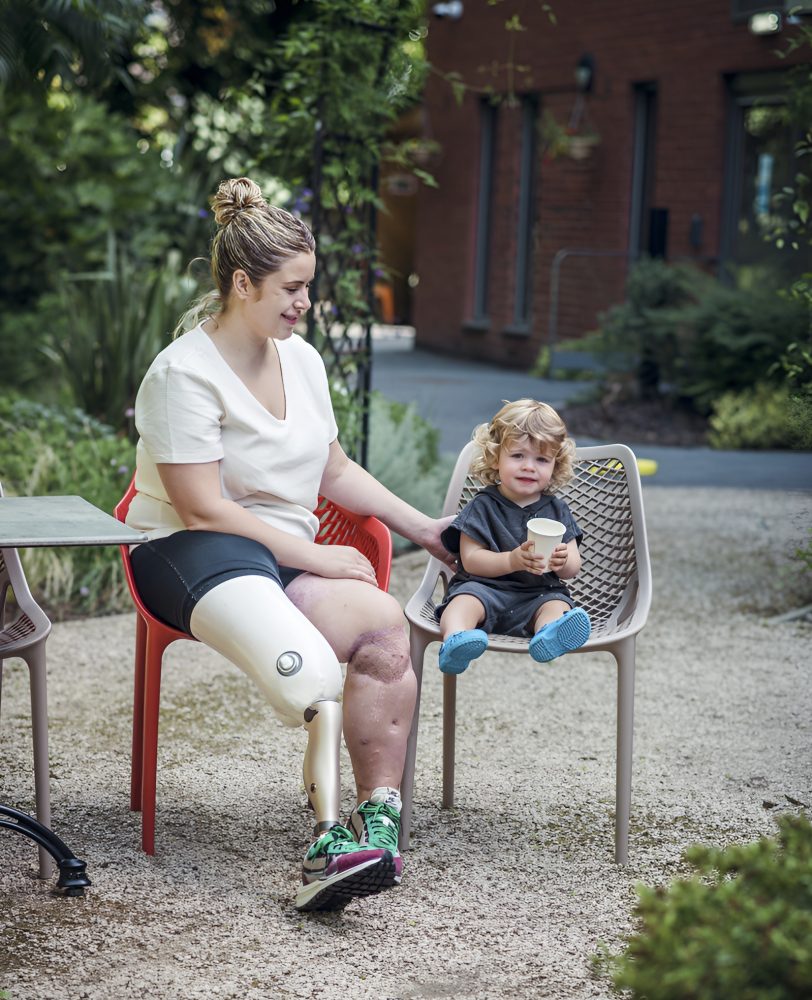 When Ruby arrived by ambulance at STEPS in November 2021, she was in a wheelchair after her amputation, only able to stand for around a minute. Since then, alongside MindPod, she’s had treatment including hydrotherapy, massage, acupuncture and physiotherapy.

MindPod, she says, has played a big part in helping her adjust to life with her new prosthetic leg.

“I honestly thought I would be able to balance straight away once I had the prosthetic,” she says. “I thought I’d just get up and start walking again, but it wasn’t like that. It took a lot of energy and time to get me where I am now.

“It’s exactly like when you first learn to ride a bike, finding the point of balance.  With MindPod, it’s been about getting me used to shifting my body weight from my left to my right side, and what feels normal now.

“I was a bit like Bambi at first, trying to get up and get my balance, and the baby actually started to walk around the same time so I’d be watching him and doing the same thing!” 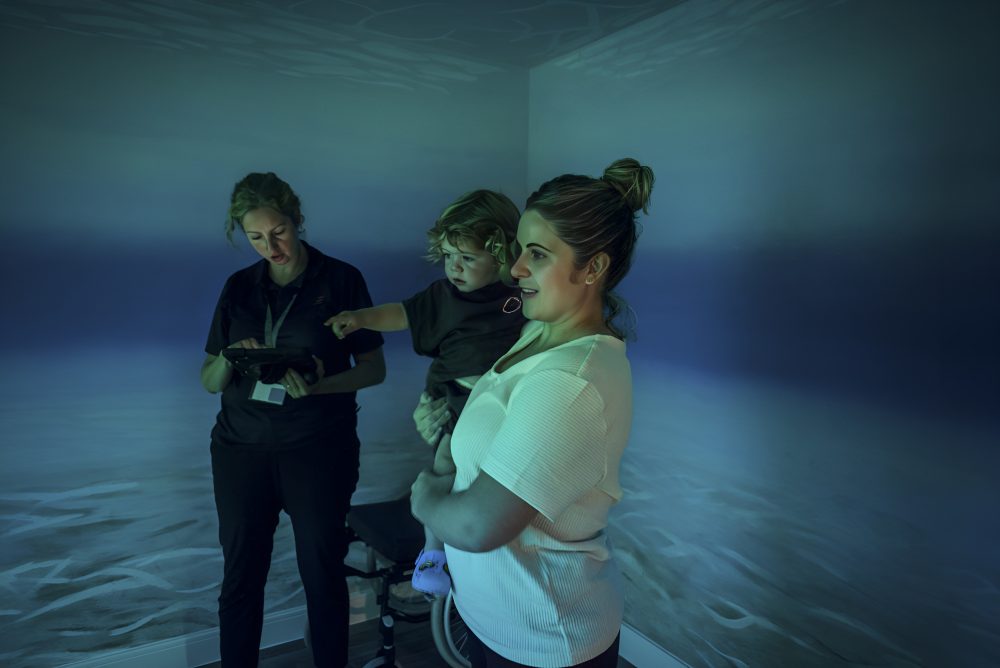 Ruby and son Leon in the MindPod

Ruby says being able to play with Leon, who’s 18 months old, has been a major focus throughout her recovery.

“Every time I’ve had something I’ve wanted to do independently, like bathing him or his bedtime routine, he’s been included in sessions so I can work towards those. I just push myself to do as much as I can.

“Therapy has given me back so much quality of life. Now I’m looking forward to taking him back to baby groups, meeting up with my friends and their children, just being a mum.”