Eco-friendly pest control vans have arrived in Liverpool - The Guide Liverpool
Contact Us Advertise with The Guide Our Video Services Follow us: 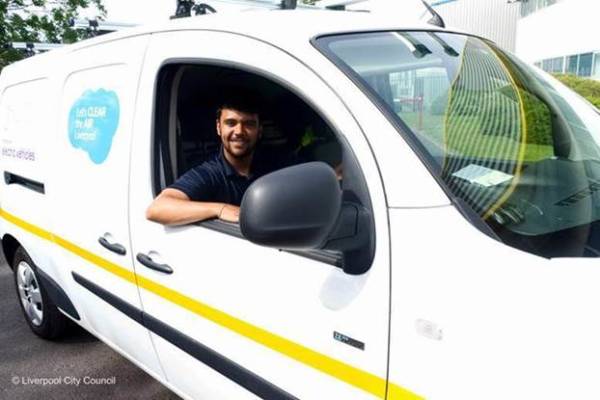 A Liverpool City Council team is causing a real buzz on the green scene after swapping its diesel-driven fleet of vans for cleaner electric vehicles.

The pest control crew are out and about five days a week, visiting homes, businesses and public buildings across the city to rid them of their rodent problems or insect infestations.

In their four-strong fleet of vans, the team clocks up about 800 miles each week. Now, thanks to a partnership with Renault UK, the team has swapped its old gas-guzzlers for clean new electric vans.

The pest control team make more than 8,000 calls a year. Each member of the team can complete up to 20 calls in a single day and notch up 40 miles each.

The new Kangoo vans have been custom-built so the council workers can get all their bug-zapping gear in the back. They even contain a specially-concealed sink and hygiene unit to allow team members to clean up between jobs.

With zero tailpipe emissions, the vans contain smaller-sized batteries meaning they use less precious metals. During the summer months they can notch up a nifty 125 miles on a single charge.

The city council has a fleet of 200 cars, vans and mini-buses and has operated low-carbon fuel-efficient vehicles for more than 10 years.

Since the Mayor of Liverpool’s commitment to improve air quality in 2017, the council has increased the number of hybrid and electric vehicles on the fleet. In 2017, 70 per cent of the fleet was diesel – today this has fallen to just 39 per cent. The authority will continue to boost this number over the next five years.

The move forms part of Liverpool City Council’s wider commitment to improving air quality in the city and protecting the environment.

Liverpool City Council’s Climate Champion and newly-appointed Cabinet Member for the Environment and Sustainability, Cllr Laura Robertson-Collins, said: “It is clear that poor air quality has many adverse effects both on the environment and potentially on people’s health. So it is important that Liverpool leads the way in developing a long-term air quality strategy.

“Electric vehicles are also really cost-effective and there are considerable savings to be made, particularly on vehicles that do lots of miles each year. In the long-run it is our ambition to improve air quality and to save council tax payers’ money.

“The way these vans have been adapted to meet the specific needs of the pest control team is a real innovation and we look forward to introducing more electric vehicles to our fleet in the future.”

This week the council has declared a Climate Change Emergency and stated its commitment to reduce the city’s carbon-emissions to zero by 2030. See details of this story here.