The away shirt, in an eye-catching rosebloom pink, features a distinctive, patriot blue pattern inspired by the angled roof of the tower in the Club crest – and amplified into a cool geometric print for 2022.

The away shirt is complemented by a tonal Club crest and a round, patriot blue neckline, with pink trim and block sleeves. 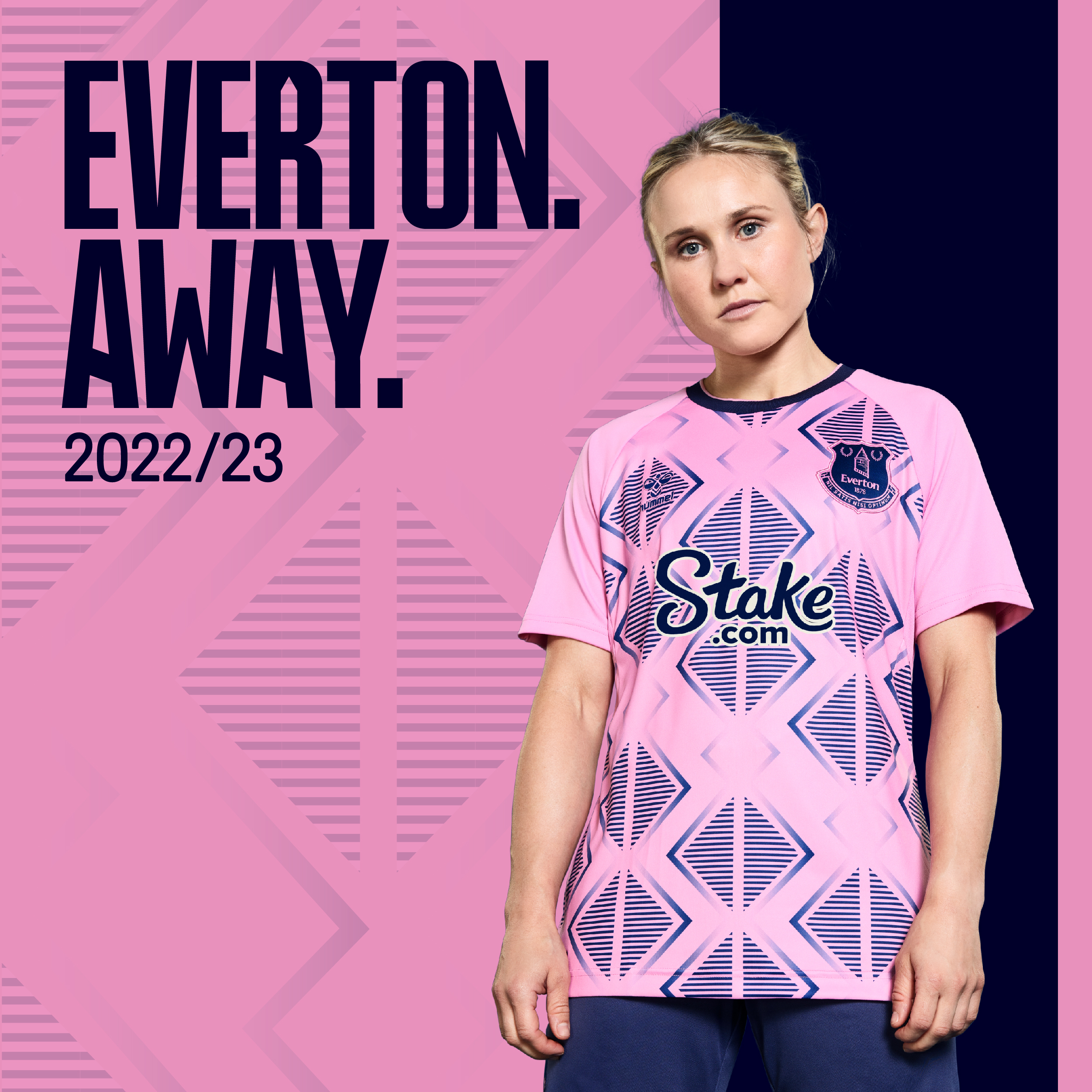 Mirroring the home kit, the traditional four hummel chevrons down the arms are pared back to two, providing a striking contrast with the sleeving.

Blue shorts see the two chevrons from the jersey replicated, this time in pink, with the hummel logo moving from the front to the back of the right leg, providing a clean, fresh look. Shorts mirror the shirt side panels, via pink mesh inserts.

Socks are rosebloom pink with patriot blue trim, featuring two hummel chevrons on the front and the tower on the reverse.

The 2022/23 away goalkeeper shirt, only available in short sleeves, is black with a fuchsia pink pattern, which darts from one side of the jersey to the other, indicative of disruptive movement patterns and agility. The shirt has plain black short sleeves with two fuchsia pink chevrons, and a tonal Club crest. 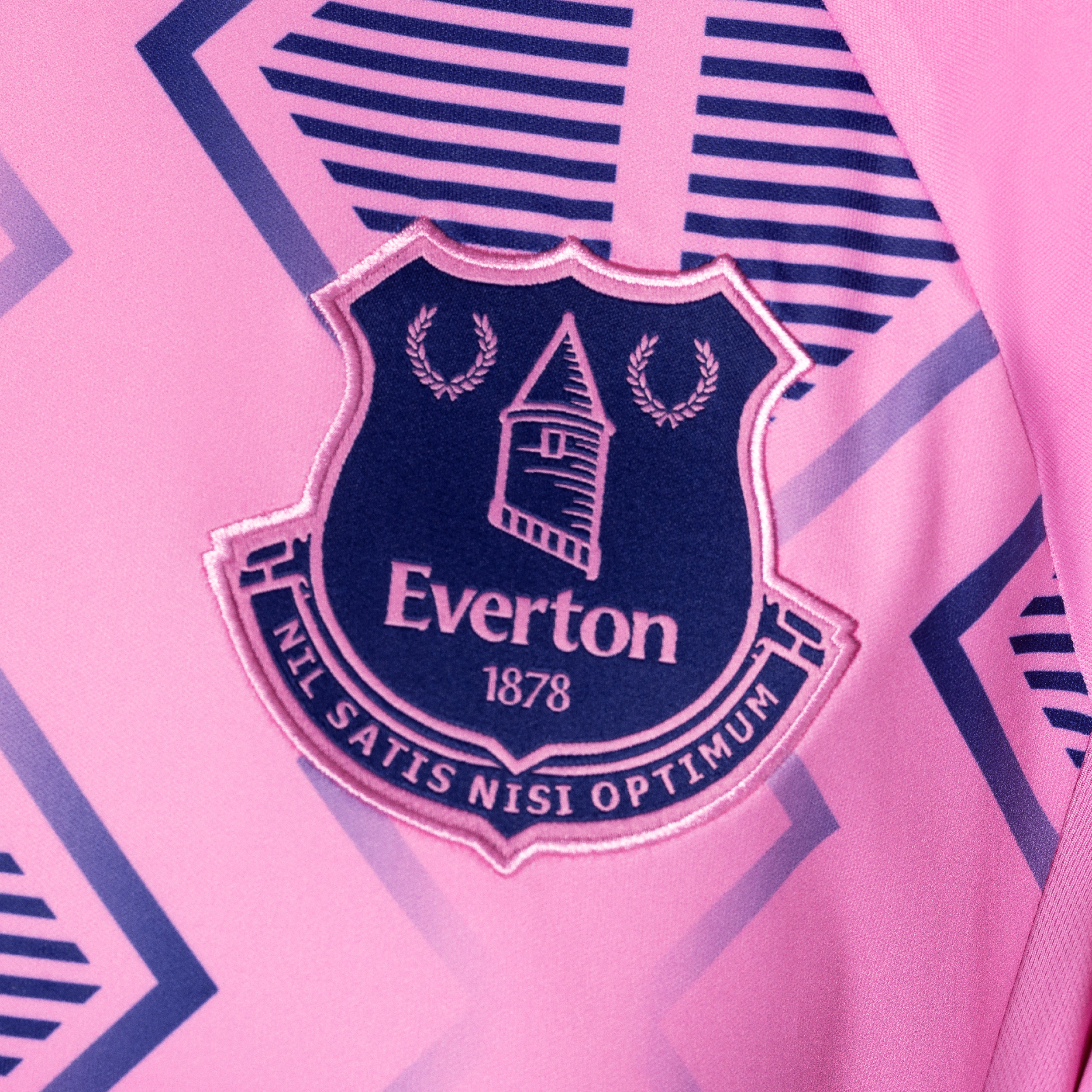 Shorts and socks are black with fuchsia pink trim and feature the two hummel chevrons on the front and tower on the reverse.

The kit will be worn for the first time when the Everton first team feature in their second pre-season friendly in the US, against Adrian Heath’s Minnesota United on Wednesday 20 July (kick-off 7pm CT, 1am BST). 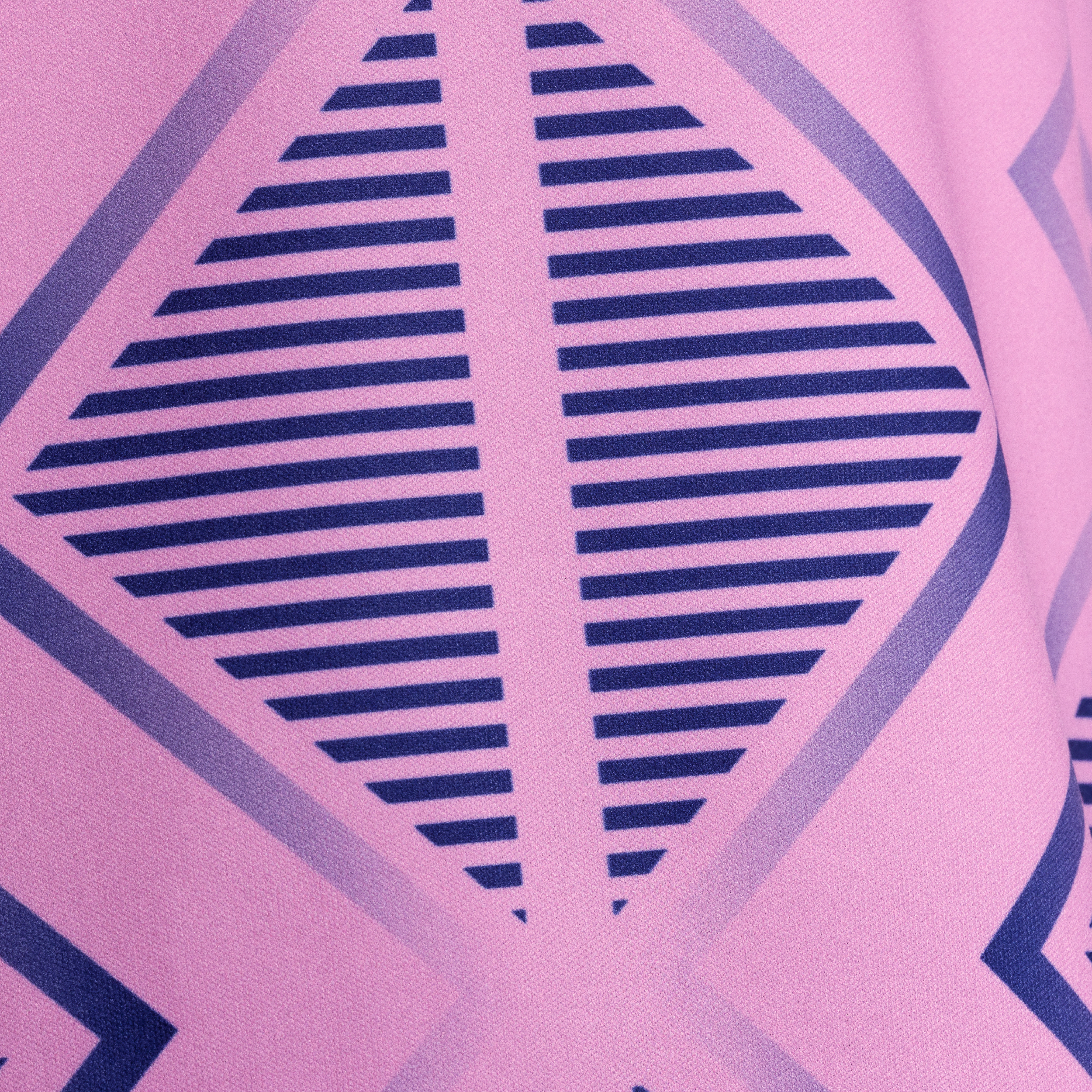 The kit will be available for supporters in the US to purchase at the Allianz Field stadium on the evening of the game.

All of our 2022/23 kits are produced using the same Eco 8 process as previous Everton hummel kits. Each jersey is made from eight bottles, and uses minimal water in the dying process, further supporting the Club’s continued commitment to its Everton for Change environmental campaign.

Richard Kenyon, Director of Communications, Revenue and International Growth at Everton, said: “We’re really pleased with the design of this away kit, which blends some of our traditional club colours with a vivid modern graphic of the tower taken from our Club crest.

‘This is another strong kit developed by hummel and we hope it gets the same kind of positive response from our supporters as the home kit did when it was launched a few weeks ago.” 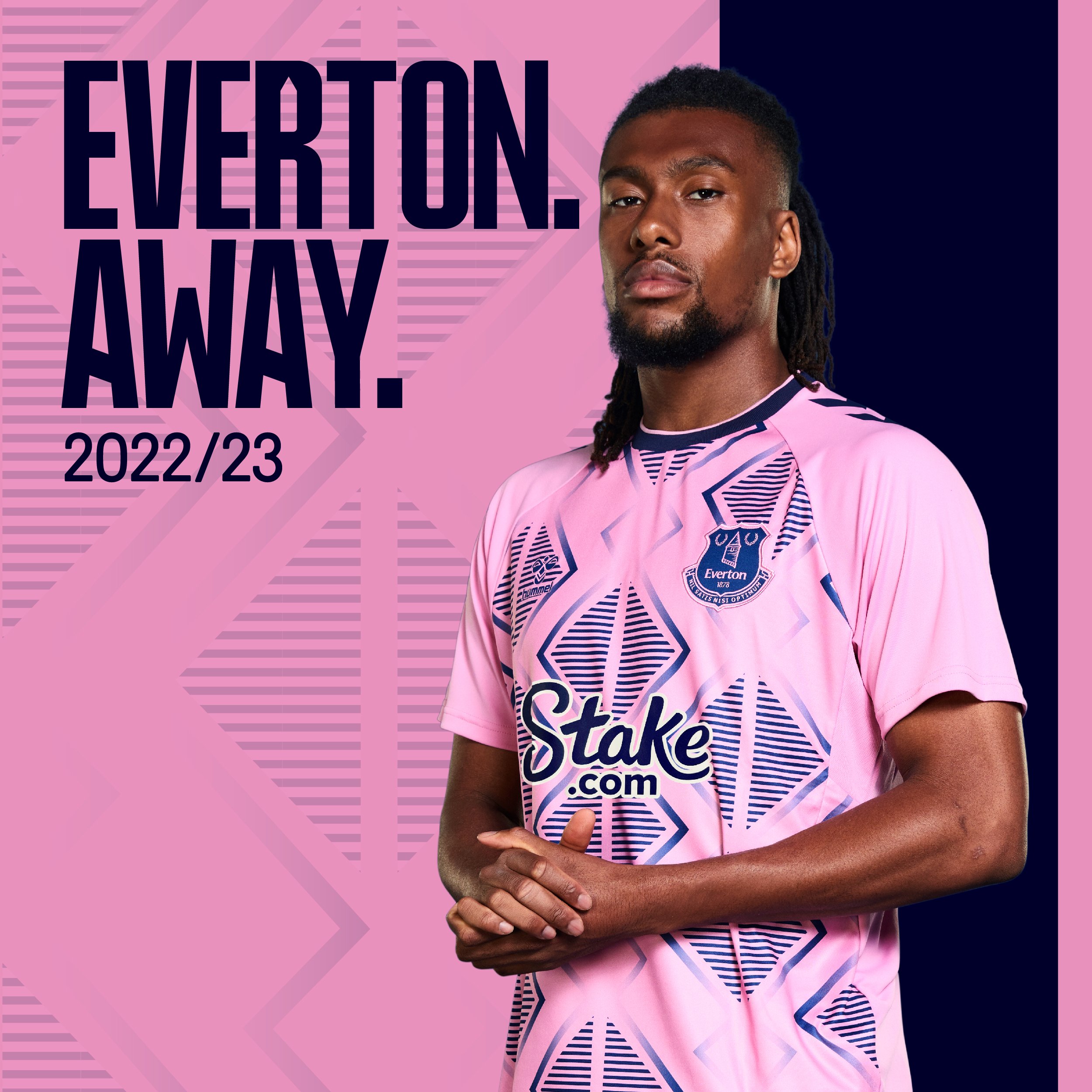 Allan Vad Nielsen, CEO of hummel, added: “Being bold and playful is part of our DNA, and similarly to us, Everton is a club that likes to do things differently and always with a big load of character.

“That’s also why we’re delighted to have worked closely together with the club to create a strip that we believe will go down in history as one of the boldest away kits of all time. 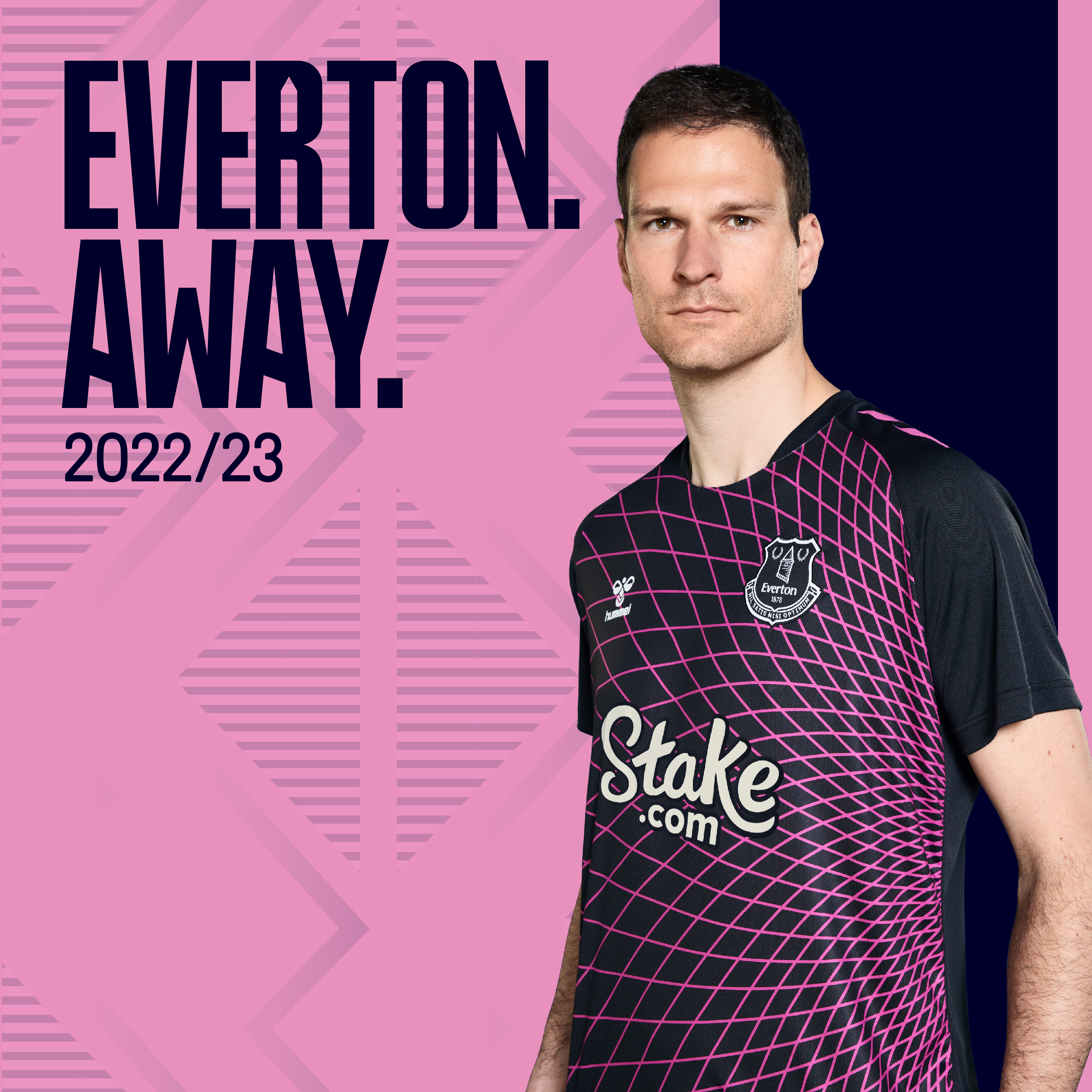 “As a fan, you always look forward to the reveal of a new kit, and we hope this one will be well-received by all Evertonians worldwide.”

The new Everton away kit is available to buy online now and in-store at Everton One (9.30am) and Everton Two (10am).