Everyone is talking about Joe Biden inauguration poet Amanda Gorman - The Guide Liverpool
Contact Us Advertise with The Guide Our Video Services Follow us:

Everyone is talking about Joe Biden inauguration poet Amanda Gorman

Amanda Gorman has made headlines all over the planet after stealing the show at the Joe Biden inauguration alongside the likes of Lady Gaga and Jennifer Lopez – here’s everything you need to know about the poet everyone is talking about.

Amanda Gorman stole the show at Joe Biden’s inauguration ceremony, as she referred to everything from Hamilton to the Bible with her powerful reading.

Here is everything you need to know about the young writer.

At 22, the US National Youth Poet Laureate is the youngest poet to read at an inauguration ceremony.

The first poet to read at an inauguration was Robert Frost, who was invited by John F Kennedy to recite a poem at his ceremony in 1961.

Gorman’s other predecessors include Maya Angelou and Elizabeth Alexander.

The musical Hamilton helped her overcome a speech impediment

After her reading, Gorman told CNN that she dealt with a speech impediment until about two or three years ago and used a song from the hit musical Hamilton to help overcome it.

She said: “It was as recent as college that I was still struggling to say the R sound, and so one thing that I would do to try to train myself to say it is I would listen to the song Aaron Burr, Sir, which is just packed with Rs.

Gorman is a huge fan of the musical and, after her reading, she replied to congratulations from the show’s creator, Lin-Manuel Miranda, saying: “Did you catch the 2 @HamiltonMusical references in the inaugural poem? I couldn’t help myself!”

She was asked to perform by the First Lady

It was Dr Jill Biden who spotted Gorman’s star power when she saw her read at the Library of Congress.

She was so impressed that she invited her to read at the ceremony.

Gorman has read at official occasions before – including a July 4 celebration when she was backed by the Boston Pops Orchestra.

MORE - Liverpool Drag Race star Sister Sister on life before drag, the city’s gay scene and what RuPaul’s really like

She wore a ring in tribute to Maya Angelou, which was given to her by Oprah Winfrey

After the reading, Winfrey tweeted: “I have never been prouder to see another young woman rise! Brava Brava, @TheAmandaGorman! Maya Angelou is cheering – and so am I.”

Gorman replied: “Thank you! I would be nowhere without the women whose footsteps I dance in. While reciting my poem, I wore a ring with a caged bird – a gift from @Oprah for the occasion, to symbolize Maya Angelou, a previous inaugural poet.

“Here’s to the women who have climbed my hills before.” 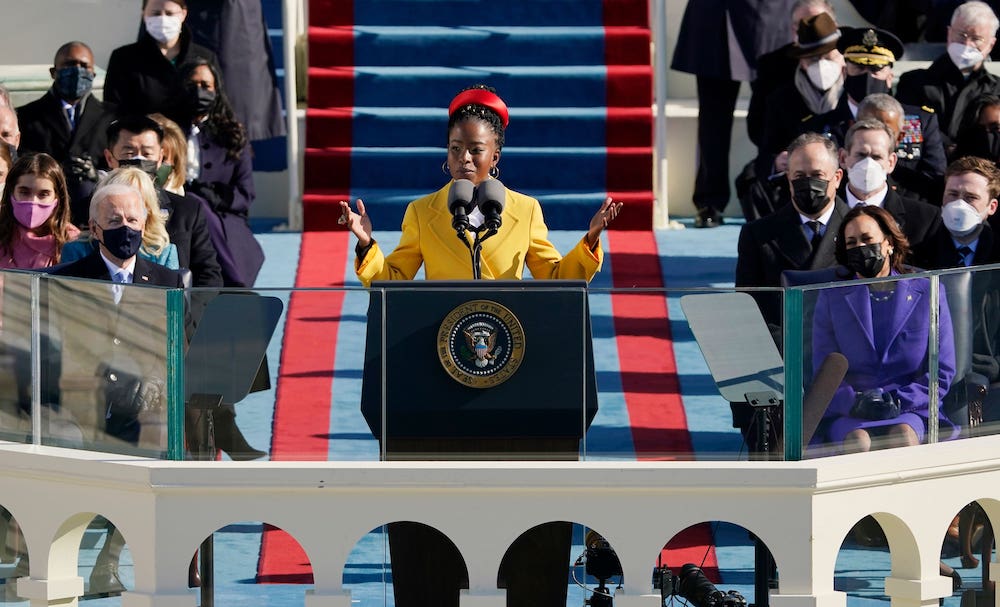 She has her eyes on the White House

This might not be Gorman’s last appearance at an inauguration ceremony, as her poem said she has dreams of running for president.

She said: “We, the successors of a country and a time,

“Where a skinny black girl,

“Descended from slaves and raised by a single mother,

“Can dream of becoming president,

“Only to find herself reciting for one.”

She already has Hillary Clinton’s vote, as the former secretary of state and presidential candidate wrote on Twitter: “Wasn’t @TheAmandaGorman’s poem just stunning?

She is now top of the Amazon charts

After her rousing rendition, Gorman’s books raced to the top of the Amazon charts as people rushed to snap up her work.

“Thank you so much to everyone for supporting me and my words. As Yeats put it: ‘For words alone are certain good: Sing, then’.”